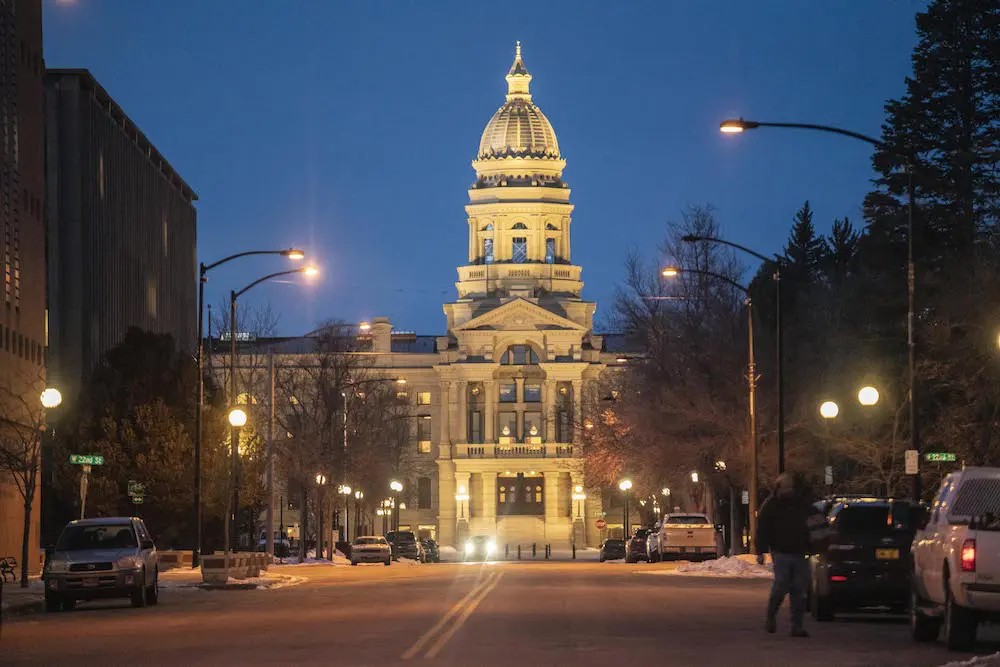 The Wyoming State Capitol lit up at night during the 2020 session. (Mike Vanata/WyoFile)

The alleged threats were not made directly to either woman, but during a telephone call between Romero-Martinez and a lobbyist on the evening of Thursday, March 10. The lobbyist contacted legislative leadership about the matter that same night, but LeBeau says information about the threats was not relayed to her by leadership. Instead, the lawmaker found out she was the subject of alleged death threats the next day from Burlingame, who learned what happened from the lobbyist.

According to both LeBeau and Burlingame, Romero-Martinez said “If they don’t get out of my way, I’ll just kill them.” He also allegedly told the lobbyist he would then take his own life. According to Burlingame, the lobbyist said “she did not feel that he had a specific plan to carry it out.”

“This is a matter that is actively under investigation, I cannot release further details at this time,” Speaker of the House Eric Barlow (R-Gillette) wrote in a press release on Wednesday that did not include any names. WyoFile confirmed those details with Burlingame and LeBeau. Both declined to name the lobbyist.

The topic of treaties

LeBeau suspects the hostility arose from a Select Committee on Tribal Relations meeting that took place on March 8.

“It stems from there because up until then, we’ve always been cordial,” LeBeau told WyoFile.

The committee met to discuss potential topics to take up in the interim. Romero-Martinez is not a committee member but spoke during the meeting to ask lawmakers to consider a particular issue.

“I read to you a rough draft concept of an issue to consider, a resolution requesting Congress to acknowledge and promote verified land designation history and support collaboration with all heirs of treaty lands,” he said.

Romero-Martinez is not a member of the Northern Arapaho or the Eastern Shoshone — the two tribes in Wyoming whose treaties the resolution would potentially involve. He told the committee the subject was important to him because of his “own ancestral roots” related to his parents being from New Mexico.

“My hope would be that Congress would mirror or clone this resolution and make an effort on their part,” Romero-Martinez said.

Committee member LeBeau — the first Northern Arapaho woman to be elected to Wyoming’s Legislature — asked the committee not to consider the topic.

“I’m going to really push back hard,” she said. LeBeau told the committee she’d spoken with both John St. Clair, chairman of the Eastern Shoshone Business Council, and Jordan Dresser, chairman of the Northern Arapaho Business Council before the meeting about the proposal by Romero-Martinez. St. Clair did not support the proposal and Dresser had “no knowledge about it,” according to LeBeau.

“I’ve always talked about meaningful tribal consultation,” LeBeau said in regard to the apparent lack of coordination with the two tribes.

“I had no idea what was going to be mentioned. So I do believe we need to be involved in that conversation if we’re going to be using our treaties,” Ute told the committee.

Where the topic goes from here will be up to the committee’s chairpeople — Rep. Lloyd Larsen (R-Lander) and Sen. Affie Ellis (R-Cheyenne), a member of the Navajo Nation and the first Native American to serve in Wyoming’s Senate. The two lawmakers will propose interim topics for the Select Committee on Tribal Relations to pursue. Final approval will come on April 8, when the Management Council meets and grants time to committees to take up topics.

LeBeau said she was disappointed that leadership did not bring the alleged threats to her attention, especially since she spent Friday morning in the same vicinity as Romero-Martinez at the Capitol.

“They did not tell me at all about the threats,” LeBeau told WyoFile. LeBeau said after Burlingame told her Friday morning, she approached Minority Floor Leader Rep. Cathy Connolly (D-Laramie), and the two of them went “straight to Speaker Barlow” and had a conversation. LeBeau said Barlow acknowledged that he was aware of the alleged threats during that conversation. He did not respond to WyoFile’s request for comment.

In his statement, Barlow said he and other members of leadership “spoke with individuals involved in this incident to better understand the nature and context of this situation.”

“They failed to protect me and to maintain my safety,” LeBeau said. She said she left the Capitol on Friday after she learned about the alleged threats and before the Legislature adjourned because she didn’t feel safe. LeBeau said she has not been given a reason for why she was not notified.

Burlingame represented House District 44 until Romero-Martinez defeated her in the 2020 election. Before the alleged threats, Burlingame said all her conversations with Romero-Martinez had been “cordial and warm.” She also initially assumed she was included because of her “friendship with Representative LeBeau.”

“I was shocked to hear that a large part of his rant concentrated on his perception that I was a pedophile,” Burlingame said. Like LeBeau, she expressed frustration with how leadership handled the ordeal.

“I know there is a sense that Representative Romero-Martinez struggles with his own mental health, and it deserves attention in its own right,” Burlingame said. “And I also believe that allowing it to go unchecked carries its own consequences for people on the receiving end of it.”

In his statement, Barlow said he had requested the Wyoming Highway Patrol — the agency that provides Capitol security — to interview the persons involved.

Burlingame said WHP told her the issue was not in its purview since the telephone call did not take place at the Capitol building. Burlingame has since filed a report with the Cheyenne Police Department.

CORRECTION: This story has been updated to reflect that Lloyd Larsen serves in the House of Representatives. – Ed