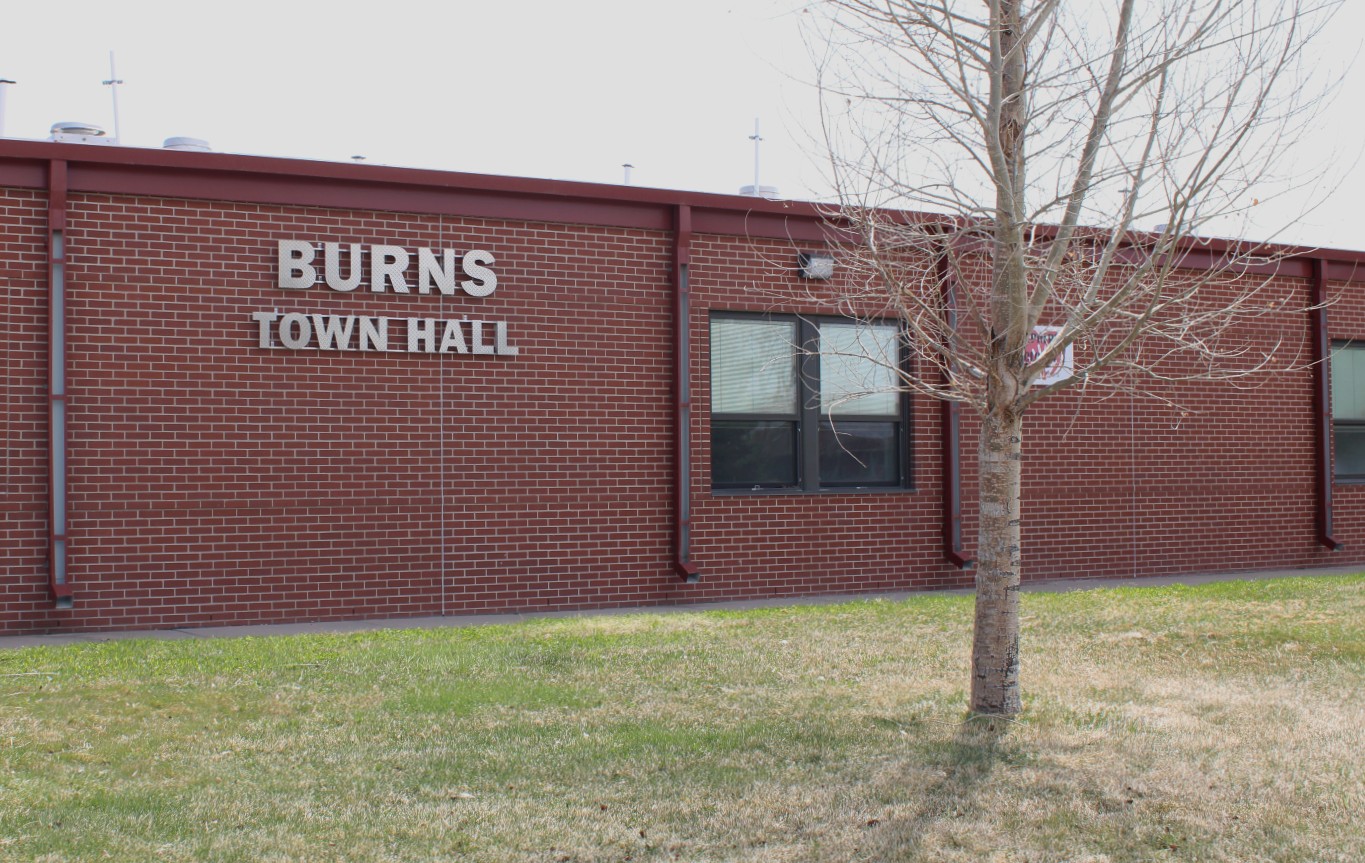 A picture of the Burns Town Hall in Burns. (Briar Napier/Oil City News)

BURNS, Wyo. — Complaints regarding Wyoming’s current liquor license laws are not new, nor are they limited to the state’s biggest cities.

But the disapproval has arguably never been louder. Especially in Laramie County.

As first proposed in the Cheyenne City Council’s meeting Monday, the council brought forward a resolution that, if signed by all municipalities of Laramie County (Cheyenne, Pine Bluffs, Burns and Albin), would have them officially declare that the state’s current method of awarding liquor licenses to cities — using census data as a baseline — is “stifling economic growth in not only large but smaller communities” and is overall a detriment to Wyoming.

Councilmember Richard Johnson wrote the resolution, with the item needing to pass through Cheyenne’s governing body first before being given to the county’s other towns. But he isn’t alone on the council in his views with six other members signing on as sponsors of the resolution, per the city’s Monday agenda.

Using the county commissioners’ Fifth and Sixth Penny Ballots as a guideline, Johnson hopes for a united Laramie County to provide a “benchmark” for the state’s other counties to copy and paste similar resolutions — and to show lawmakers that Wyoming municipalities, big and small, are wanting change.

“I wanted to use Laramie County as an example,” Johnson said Thursday. “Once I get it through Cheyenne, then we’ll start forwarding it to the other municipalities that this is what we have done. Albin, Burns and Pine Bluffs indicated that they wanted to support this so that it can go on to other counties across the state.”

Much has been said already regarding the recently-resolved saga over the City of Cheyenne’s new full retail liquor license, in which the city council awarded The Railspur project the permit Monday after a months-long ordeal and out of 11 total applicants. But across Wyoming, similar problems have come about in towns fractions of the size of the capital.

For instance, arguably the most striking recent example of a lack of liquor licenses inhibiting business in Laramie County comes not from Cheyenne, but from Pine Bluffs. The town noted in a Wyoming Association of Municipalities (WAM) meeting that it had to turn down four businesses from setting up shop due to the lack of licenses, Johnson said.

Pine Bluffs Mayor Justin Fornstrom (as a stakeholder in Pine Bluffs Distilling) said Thursday he’d be recusing himself from voting on the resolution, to which Johnson said he’d likely make an amendment to have a town councilmember sign for the town in Fornstrom’s place. Added in with similar problems he heard in the WAM meeting coming from other places (plus Cheyenne’s own issues), Johnson quickly became alarmed.

“It was during that call that we learned that Lingle had two applicants that they had to turn down because they didn’t have available licensing,” Johnson said. “And we’re like, ‘How many people are in your community?’ And [Lingle] is like, ‘403.’

“If Cheyenne and Casper complain about it, they can kind of say, ‘Well, that’s Cheyenne and Casper. They’re anomalies in Wyoming.’ But when Lingle and Pine Bluffs are saying this stuff, that’s when we’re like, ‘OK, we’ve got a problem on our hands that needs to be identified.'”

Johnson noted that he asked permission to include each of Laramie County’s other towns before adding them onto the resolution. But in Burns, where town councilmember Judy Johnstone is working closely with him to help get the point across to lawmakers, the town of just over 300 people especially wants it to be known that the matter isn’t just Cheyenne grumbling to get what it wants.

Burns isn’t dealing with a licensing issue at the moment, but Mayor James Clark said it could soon. All municipalities in Wyoming are given a minimum of two liquor licenses, with Burns already having given out one to a restaurant as it currently mulls applications toward its open one.

However, Clark said a convenience store could come to Burns in the “not the way-off future.” If that place wanted to sell alcohol under the current laws — assuming both of the town’s liquor licenses had been taken by then — it couldn’t.

Johnstone said that she’s been most frustrated with the belief that the limited licenses in turn limit business expansion and growth, particularly with tourism being one of Wyoming’s major industries.

“The liquor laws in the state of Wyoming are antiquated, and that’s definitely a quote from me to you,” Johnstone said Thursday to Cap City News at the Burns Town Hall. “It’s ridiculous. If we had more permissible laws to allow us to develop some of the businesses that people want to develop, we would be drawing people from Colorado. Right now, Colorado is getting our dollars.”

Johnson and Johnstone both agreed that as lifestyles and trends change, Wyoming needed to adapt itself to accommodate them. Noting one such example, Johnson said he often stops in breweries when visiting other towns as a tourist; likewise, when he goes to Cheyenne’s Freedom’s Edge Brewing Company for a Saturday afternoon beer, he said he’s noticed an influx of out-of-town traffic in the building.

What Johnson calls “quality of life” aspects are important pieces in not only bringing people to Wyoming, but keeping them there, he says. And he believes revised liquor license laws could play a role in making that happen.

“If you don’t want to partake and have an adult beverage, guess what? You don’t have to,” Johnson said. “The state focuses so much on our greatest export, meaning our children [leaving] to other locales for business opportunities where the jobs are available. … By actually creating ourselves as a destination worth staying in, that’s also a quality of life type of thing.”