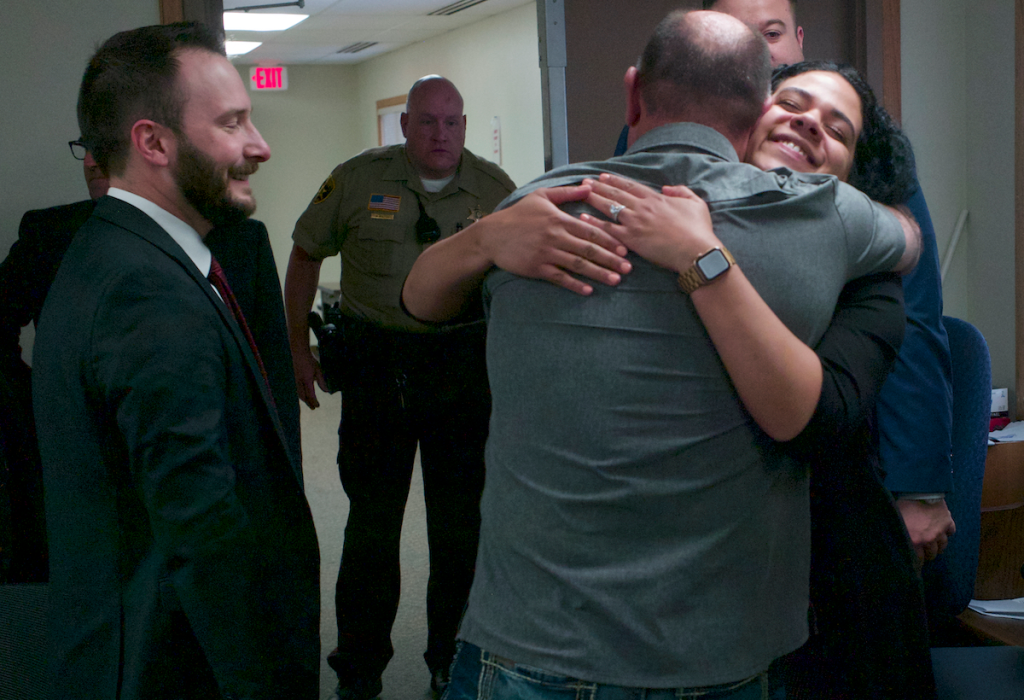 Defense attorney Katye Ames gets a hug from Brad Cape on Friday after his acquittal on trespass charges after corner crossing at Elk Mountain Ranch in 2021. (Angus M. Thuermer, Jr./WyoFile)

Mayfield Davis filed the motion to dismiss criminal trespass and trespassing to hunt charges against Brad Cape, Zach Smith and Phillip Yeomans on May 4, according to court documents. The judge has not yet signed an order dismissing the new charges as requested, but is expected to next week, a clerk at the court in Rawlins said.

A Carbon County jury found the three men, plus companion John Slowensky, not guilty on April 29 of a 2021 corner crossing incident at the Elk Mountain Ranch owned by North Carolina resident Fred Eshelman. Just before the trial started, Mayfield Davis served three of the men with a summons to appear at an arraignment on similar charges, but relating to a hunting excursion in 2020.

“The essential facts in this matter were considered by the Jury.”

Mayfield Davis wants that arraignment canceled and the 2020 charges dismissed.

“The essential facts in this matter were considered by the Jury,” the motion reads. “Therefore, rather than submitting the same evidence to another Jury, the State believes a dismissal would be in the interest of judicial economy and would ask the Court to dismiss the Information [charges] without prejudice.”

Without prejudice means the case could be filed again.

Corner crossing is the act of stepping from one piece of public property to another at the common of two private pieces, all arranged in a checkerboard pattern. The hunters, in both 2020 and 2021 instances, said they never touched Eshelman’s private land when they corner crossed during the two hunting seasons.

Their trial for the 2021 incident lasted three days. A three-woman, three-man jury found them not guilty of criminal trespass — and an alternate charge of trespassing-to-hunt — in fewer than two hours. The defendants did not testify.

In her motion, Mayfield Davis laid out a timeline for the second round of charges — those for the 2020 incident she now wants dismissed.

The prosecutor’s office first alleged the 2020 trespass on April 13, 2022, before the trial on the 2021 incident began, the motion says. The office filed those charges in response to the hunters’ request to dismiss their 2021 case.

The information from 2020 corner crossing was to be used, and was used, in the trial for the 2021 incident, the motion says.

Just before jury selection began in last month’s trial, a Carbon County Sheriff’s Office deputy served three of the men with summons for new charges. It asked them to appear at a June 6 arraignment in Rawlins.

The men killed one elk in 2020 and two elk and a deer in 2021, court documents state. Eshelman’s Iron Bar Holdings owns the Elk Mountain Ranch that stretches across more than 20,000 of Carbon County’s Elk Mountain.

Across the West, some 8.3 million acres of public land are “landlocked” by any definition that corner crossing is illegal. A separate civil case, brought by Eshelman, is being considered in federal court where federal public land access laws could come into play.

They documented each monument and crossing point digitally, according to court documents and testimony. In 2021, they used a fence ladder to climb over two T-posts — driven in the two separate Elk Mountain Ranch sections and chained together — to go from one BLM section to another without setting foot on private land.

Mayfield Davis argued that passing through the airspace above Eshelman’s property constituted trespass.