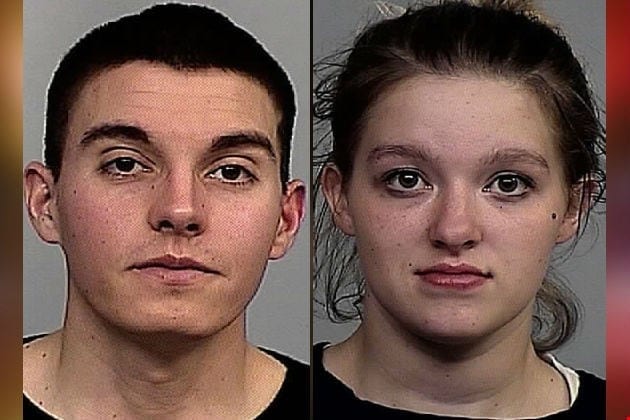 Casper Police have arrested two local individuals on drug charges, however one of the suspects was booked in on multiple charges of possession, at least two of them being felonies.

According to police arrest affidavits, 21-year-old Arica Wallace (aka Arica Wyatt) and 32-year-old Manuel Sambrano were pulled over Sunday night, after police had received reports that the pair were involved in an altercation at a private residence.

After the fall police were able to secure Wallace. Sambrano is said to have remained with the vehicle during the stop.

During investigation, police discovered that Wallace had two confirmed Natrona County Warrants for a probation violation and possession of methamphetamine, respectively. Police say that Wallace confirmed that she ran because she believed she was “going to prison.”

While questioning Sambrano in the suspect vehicle, police say they noticed the smell of marijuana coming from inside. Investigators describing the odor as “pungent.”

A search of Sambrano’s person yielded a multi-colored glass pipe, which Sambrano denied ownership of. A prescription drug bottle was also found in the vehicle, bearing Sambrano’s name on the label and approximately a gram of raw marijuana inside.

During the search of the vehicle, after being read her miranda rights, police say that Wallace advised that “anything” found in the vehicle did not belong to Sambrano.

Police say that a search of Wallace’s person, car, and belongings yielded a loaded syringe believed to be filled with a felony amount of methamphetamine, another loaded syringe that field tested positive for heroin in a felony amount, a plastic container filled with a suspected marijuana resin, two pills of Methadone Hydrochloride (a schedule II controlled substance), 46 empty syringes, multiple jewelry bags containing white residue, and other suspected paraphernalia.

Manuel Sambrano was arrested and booked on Controlled Substance Possession/Marijuana.

Any charges are subject to change. Suspects will face formal charges at their initial appearance(s) in court. All suspects are presumed innocent until proven guilty in court.