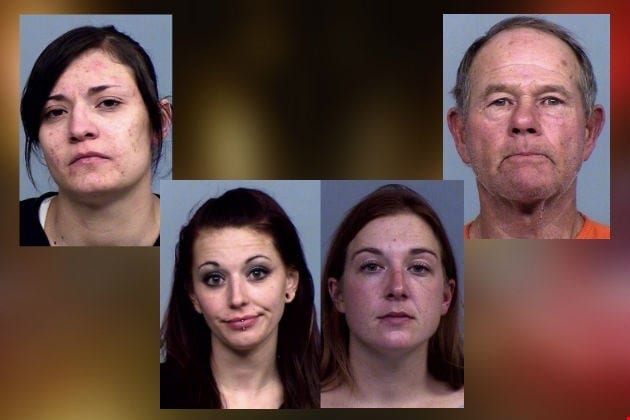 Three people have been arrested for drug possession, and a fourth was arrested after police say that she gave them a false name. All of this the result of a call to law enforcement to investigate a possible auto-burglary-in-progress.

Police received the call at just before 2:00 am on Thursday (2/2/17) morning. The reporting party described a possible auto burglary in progress, at a parking lot on the 900 block of North Durbin street. Police responded but were unable to locate the suspect.

Nearly two hours later, witnesses called again and reported seeing the same individual at the scene attempting to gain access to a vehicle in the parking lot, and also that there was a white welding truck in the area.

Police were able to locate a welding truck matching the witness description, a short distance away.

With the truck was Everette William Phillips, Vanessa Jordan Lovato, and Rose Autumn Rocco of Casper; and Courtney Renee Smith of Flint, Michigan.

During investigation of Lovato, police observed that she was exhibiting behavior characteristic of methamphetamine use. Police identified Lovato as the individual who had been accessing a car in the Durbin street parking lot, Lovato saying she had permission to do so, but was vague about who owned the vehicle.

During questioning, investigators say Phillips identified Lovato as a methamphetamine user, and said that he suspected she was under the influence at the time police stopped them.

A subsequent investigation of the vehicle and persons yielded three used syringes from a bag believed to belong to Lovato.

Upon exiting the vehicle, police noticed a spoon on the seat where Phillips had been seated as well as a used syringe on the floor under the seat.

Phillips, Lovato, and Rocco were all arrested and booked on charges of Possession of a Controlled Substance Methamphetamine. The syringes, jeweler’s bag, and syringes were field tested, all came back with a presumptive-positive result for methamphetamine.

During the investigation, police say that the woman, later identified as Courtney R. Smith of Michigan, had given officers an incorrect name. Through further investigation and questioning of the suspects on the scene, Smith’s identity was eventually determined, and Smith was found to have an existing warrant. Smith was arrested and booked on charges of Failure to Comply and Interference.

All of the suspects in this case will face formal charges during their initial appearance in court. Charges are subject to change, and all suspects are considered innocent unless otherwise proven in court.