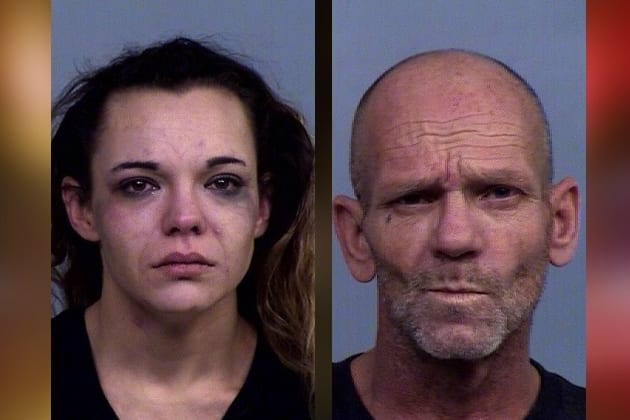 Two individuals are facing charges of child endangerment, after the pair were arrested in related incidents, during the late Wednesday, early Thursday hours this week.

Ella Marie Baldwin is facing a single charge of Felony Child Endangerment- Methamphetamine. Baldwin heard the charges read to her in Natrona County Circuit Court, before Judge Brian Christensen, tearfully responding to questions put to her from the bench.

The maximum penalty for each charge is a fine of $5,000, 5 years incarceration, or both.

Police say they made contact with 25-year-old Baldwin, just before 11:00 pm on the night of February 1st. According to arrest affidavits, police claim that Baldwin was driving a vehicle without a driver’s-side headlight nor a rear-registration light.

When officers made contact with the suspect, they say that Baldwin exhibited visible signs of drug intoxication, prompting the use of a K9 unit to do an open-air search around the vehicle.

Baldwin was arrested and booked into jail, in the meantime police made contact with 46-year-old Sydow at his home.

The child that Baldwin had spoken of earlier was in the residence at the time and was subsequently taken into protective custody.

Police do note in the arrest affidavits that the areas where the suspected paraphernalia was found, was within potential access of a young child.

The next stop for both suspects will be for a preliminary hearing, where it will be determined if their charges will be bound over to district court.

Charges are subject to change, and all suspects are considered innocent unless otherwise proven in court.