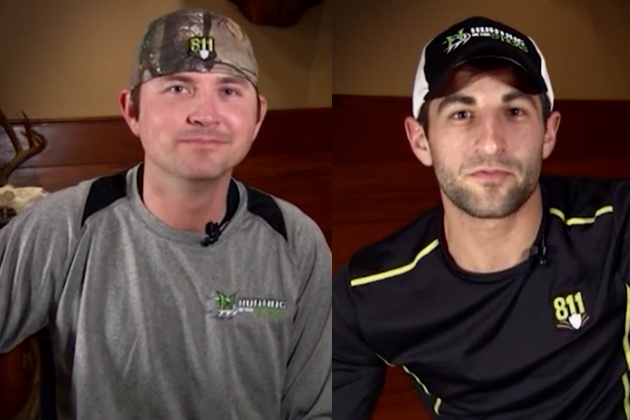 Jimmy Duncan (right), Ricky Mills (left), as they appear in the "Western Redemption" episode of "Hunting In The Sticks" on The Pursuit Channel. A tip from a viewer of this episode led to the pair being charged with poaching. (YouTube)

A television program that features video of hunters in their element, has paused operations after news broke that two of its hosts had entered “no contest” pleas to poaching in the state of Wyoming.

As of March 16, 2017 the website for Kentucky-based “Hunting in the Sticks” had been taken down, and replaced with the television show’s logo.  Under that is simply a typed statement, black letters, on a white screen.

“Hunting in the Sticks (HITS) regrets the activities engaged in by two of its team members. HITS wishes to assure everyone that the decisions made, and actions taken, by these two members do not reflect the position, belief or concurrence of our sponsors, endorsers or any other HITS team members. Neither HITS, nor its sponsors and endorsers, would knowingly allow violation of the law or accepted practice during creation of any video. HITS remains committed to following the laws, rules and regulations that govern outdoor sporting activities.

HITS appreciates the thoughtful support it has received regarding this incident and acknowledges the outrage expressed by some. In order to properly appraise HITS position, for the next few weeks HITS will be pausing its operations. We want to carefully consider the needs of everyone involved in the production of the show, as well as the wishes of the public, in order to determine how HITS will move forward.”

On March 13, Ricky J. Mills and Jimmy G. Duncan, hosts for “Hunting in the Sticks,” pled no contest to numerous wildlife violations totaling over $30,000 in fines. The case started with a tip from a concerned Wyoming citizen who watched a “Hunting in the Sticks” episode called “Western Redemption.” In the episode, Mills and Duncan are seen harvesting two bull elk in Wyoming. The concerned citizen noticed that the area they claimed to have killed their elk, did not match the area of their licenses.

Other online entities for the show have also seemingly vanished. Including episodes of the show hosted on YouTube and Vimeo, both of which had the episode in question as part of their library. As of this writing, the only place online where the episode can currently be seen, is a Vimeo channel titled “Hunt Channel.”  You can find that video by going here.

The YouTube Channel for “Hunting in the Sticks” is still active, but currently shows no content.  Several episodes were available to stream at the time the story broke.

Following the story breaking on Tuesday, the comments section of “Hunting In The Sticks” became a sounding board for people angry about the charges to voice their criticism.

Ricky Mills was sentenced to pay $7,460 in fines, $6,000 in restitution for the bull elk he killed, $240 in court costs and lost his hunting privileges for 15 years. Mills will be entered into the Wildlife Violator Compact which will prevent him from hunting and trapping in 43 participating states.