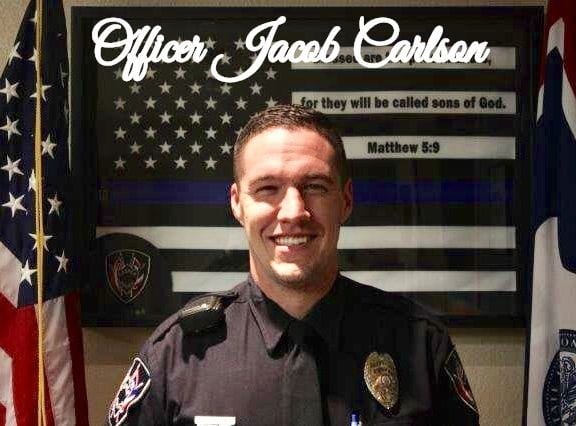 Photo of Officer Jacob Carlson that was presented when the officer's name was released during a Tuesday press conference, May 8th. Carlson was struck by several bullets, during an exchange of gunfire on Sunday, May 6th. The suspect was struck and killed in the exchange. (Courtesy CPD)

The Casper Police Department has identified Officer Jacob Carlson as being the officer who was injured during an exchange of gunfire, on Sunday, with an armed suspect. The injuries suffered by Carlson have left the officer in critical condition at an area hospital.

The name of the suspect was identified by the Natrona County Coroner as David P. Wolosin.

The name was released by Casper Police Chief Keith McPheeters, during a press conference Tuesday afternoon.

During the conference, Officer Jacob Carlson was described as a three-year veteran of the Casper Police Department.

Carlson is reported to be in critical condition, as of Tuesday afternoon. McPheeters says that the officer has many more surgeries ahead of him at Wyoming Medical Center. McPheeters said that one wound in particular struck an artery in Carlson’s waist area, requiring the use of multiple units of blood and related products.

The Casper Police Department also acknowled the support for Carlson, saying that it has been manifested many different ways.

“We especially recognize the strength of Officer Carlson’s wife and family and their faith in Jacob’s will and his ability to recover,” the CPD said in a written statement. “The local Law Enforcement Family has been integral in assisting the citizens of Casper and the men and women of the Casper Police Department and we extend our gratitude to the Natrona County Sheriff’s Office, Mills Police Department, Evansville Police Department, and the Wyoming Highway Patrol. Messages of support and encouragement have been received from law enforcement agencies across the nation. Local individuals and business have overwhelmed us with their kindness and generosity.”

At the conclusion of the meeting, Chief McPheeters said that he intended to release more information about the incident on Wednesday. Going on to say that his intention was to release the dash cam footage, from the officer’s car at the time of the incident.