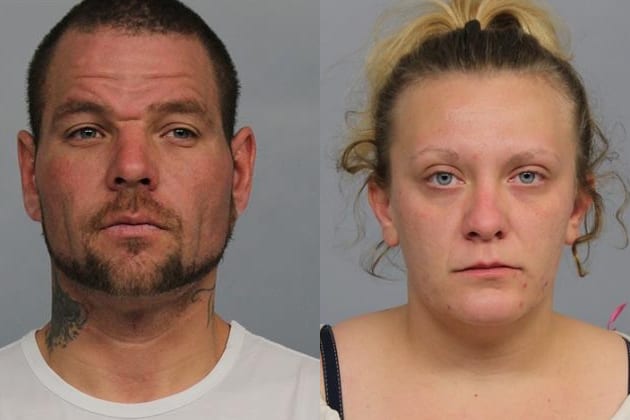 CASPER, Wyo. — Two Natrona County residents were arrested during the afternoon hours of April 16, and were booked into the jail on recommended felony drug charges.

According to law enforcement paperwork, Jeremy A. Day and Ashley B. Wall were arrested during the three o’clock afternoon hour, Tuesday.

Day was booked on recommended charges of Driving Under Suspension and Felony Possession of a Controlled Substance.

Wall was booked on a single recommended charge of Felony Possession of a Controlled Substance.

An affidavit filed in the case, by Casper Police personnel, says that officers were patrolling near South Coffman and Grandview Place in Casper, when they observed a red passenger van run a stop sign.

Police say that they pulled the vehicle over near the intersection of Coffman and Cascade, and contacted the driver, who was identified as Day. Wall was described as being a lone passenger in the vehicle.

It’s reported that Day was unable to provide officers with a driver’s license, and after an investigation it was learned that Day had his driving privileges withdrawn by the state of Wisconsin.

Day told officers that he had made arrangements in Wisconsin and paid reinstatement fees in Wyoming, and should have had a valid license.

CPD reports that local Department of Motor Vehicle personnel confirmed to police that Day had not paid a reinstatement fee and had not taken care of his license in Wisconsin.

Both Day and Wall were also identified as currently being on probation.

The affidavit says that both of the suspects gave police permission to search the vehicle, and officers report that as Wall was exiting the vehicle, she handed a pipe with suspected marijuana residue to officers.

Day was also searched and found to be in possession of a pill that Day identified to officers as Hydrocodone.

Multiple pills were also reportedly recovered from the vehicle, and another pill was reportedly found on Day’s person at the Natrona County Detention Center.

Day claimed to have a prescription for the Hydrocodone, but officers were unable to verify the prescription. It is further stated in the affidavit that persons acquainted with Day reported having hydrocodone pills go missing from their home.

The acquaintance said that Day had not been given any of the missing pills.

Both Day and Wall were transported to the Natrona County Detention Center.