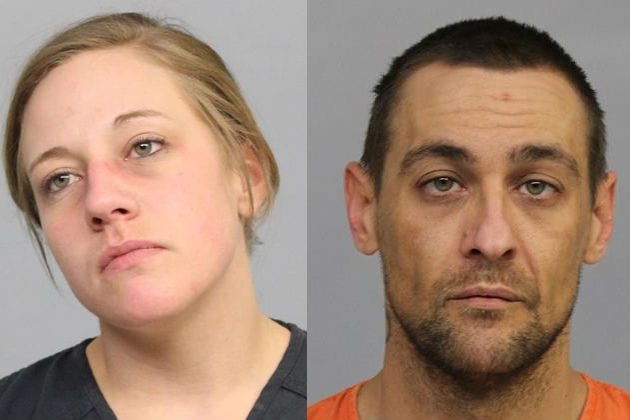 CASPER, Wyo. — A home inspection by the Wyoming Department of Probation and Parole and Casper Police Department has led to the arrest of a couple on recommended drug related charges.

Amanda Lynn Stevens and Brandt Michael Cross were arrested on April 19, 2019 from a private residence near the intersection of East 15th and South Wilson Streets.

Stevens faces recommended charges including Interference with a Police Officer and Child Endangerment with Methamphetamine.

It is also noted in an affidavit filed in the case, that Cross is wanted on a warrant from Converse County that also includes Delivery of Methamphetamine and Child Endangerment.

Police officers say that they and agents with Probation and Parole responded to Stevens’ private residence for a P & P home inspection.

Police also note that it was suspected that Cross was staying at the residence, and had a reputation for fleeing from law enforcement.

Officers report that they were greeted at the door of the home by a man that would eventually be identified as Cross. It is alleged that Cross gave investigators a false name upon initial contact.

At the time of police contact, it is reported that the male was taking care of a juvenile inside the home.

Stevens was reportedly not at home, at the time of officers arrival. Over the course of investigation, the affidavit says that investigators were unable to confirm the identity initially given to them by Cross.

Cross claimed to have no identification and called Stevens to verify the incorrect identity.

Police allege that Stevens spoke with them on the phone and verified the false identity for Cross. It is further noted that the false name was not on an approved list of people who could be in the home.

Cross’s actual identity was confirmed by officers after comparing the suspect with a previous booking photo. Cross was subsequently arrested.

Stevens returned to the home after Cross was taken into custody and spoke with police and agents.

Stevens said that she was in a dating relationship with Cross and that he didn’t live at the home, but spent between 3 and 5 nights a week at the residence and kept some belongings there.

Stevens told officers that she thought Cross had cleared up his warrants, and knew that he had previously been in jail for methamphetamine.

Cross also told officers that she knew Cross to use methamphetamine currently.

Stevens denied knowing that there was paraphernalia in her home, and said she was unaware that Cross had smoked meth in her vehicle.

The affidavit also notes that Stevens told officers that she had lied about Cross’s identity because he was not on her approved list and she did not want him to get in trouble.

Stevens was arrested and transported to the Natrona County Detention Center.

The juvenile that had been at the home when police arrived was place in safe custody.