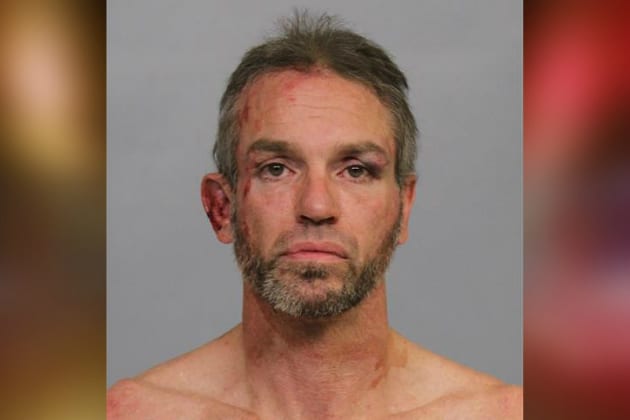 CASPER, Wyo. — Casper Police say that a man was arrested on multiple recommended charges after a man was alleged to have fled police multiple times in the month of April.

Police say that they received in formation that Tuttle, who was wanted on an active Felony Criminal Warrant, was going to be in the are a of the 1500 block of East 2nd Street at approximately 4:45 pm, Friday, April 19.

Police note in an affidavit that Tuttle had an extensive history of attempting to flee or elude law enforcement, including an incident where Tuttle allegedly fled police on April 6, 2019, while on a motorcycle.

Another event referenced by police alleged that Tuttle was the passenger in a vehicle, during a stop, where Tuttle exited the area on foot, to avoid being taken into custody.

Casper PD says that they arrived at the 1500 block of East 2nd Street, and observed a vehicle believed to be driven by Tuttle.

Officers say that as they approached the vehicle with overhead lights on, Tuttle swerved around the officers traveling north on South Fenway Street, the turning westbound on East 1st.

Police describe the suspect vehicle as traveling at a high rate of speed.

The suspect vehicle continued southbound onto South McKinley Street, with officers noting that the suspect failed to stop for officers, nearly colliding with a vehicle at 2nd and McKinley,  at speeds estimated at 60 mph in a 30 mph zone.

Tuttle was then said to have turned onto East 4th Street, running multiple stop signs, before turning southbound on South Park Street.

Witnesses say that the suspect vehicle had been traveling at a high rate of speed, southbound on Poplar Street, when the vehicle collided with another vehicle.

Officers responded to the area and located the chase suspect vehicle in an alleyway behind Hyview and Coffman Avenue. The vehicle was found to be empty.

Police say that officers began canvassing the area without locating the suspect.

Meanwhile, a K9 sniff of the vehicle indicated the presence of controlled substances inside. Officers searched the vehicle and found a silver socket with suspected marijuana residue.

At approximately 11:20 am, April 20, police were dispatched to an area where witnesses say that Tuttle had been involved in an argument with a woman.

Reporting parties say that a red vehicle was occupied by a female and male who seemed to be involved in a non-physical disturbance. Both the occupants then left the vehicle in the road, and walked into an alley.

Police found the vehicle near 12th Street and Boxelder, and knew that a nearby residence was frequented by Tuttle.

Police contacted a person at the home, who said that Tuttle had left the area and was not inside. However, later the person admitted to officers that Tuttle was inside hiding under the stairs.

Police report that Tuttle was found in a crawlspace of the home, and that officers had to go into the crawl space to take Tuttle into custody.

The affidavit filed in the case says that Tuttle physically resisted officers attempts to place him into custody, pulling and rolling away from officers. Officers say that they struck at the suspect and ultimately used the drive stun function of a Taser to subdue Tuttle.

Police say that Tuttle denied being in the red vehicle earlier in the day, and said that he had not run from police at any time. Tuttle further claimed to have arrived into town from Cheyenne, earlier in the day.

Police examined the vehicle that was left in the road on Saturday, and describe the car as having a “pair of pliers jammed into the area of the ignition.”

The vehicle was found to belong to an inmate at the Natrona County Detention Center who told jail officials that he had not loaned the vehicle to Tuttle.

The affidavit in the case also notes that Tuttle has several previous charges of Possession of a Controlled Substance in Natrona County dating back to 2008.

Tuttle was ultimately transported to the Natrona County Detention Center, after being examined at an area hospital, following his arrest.