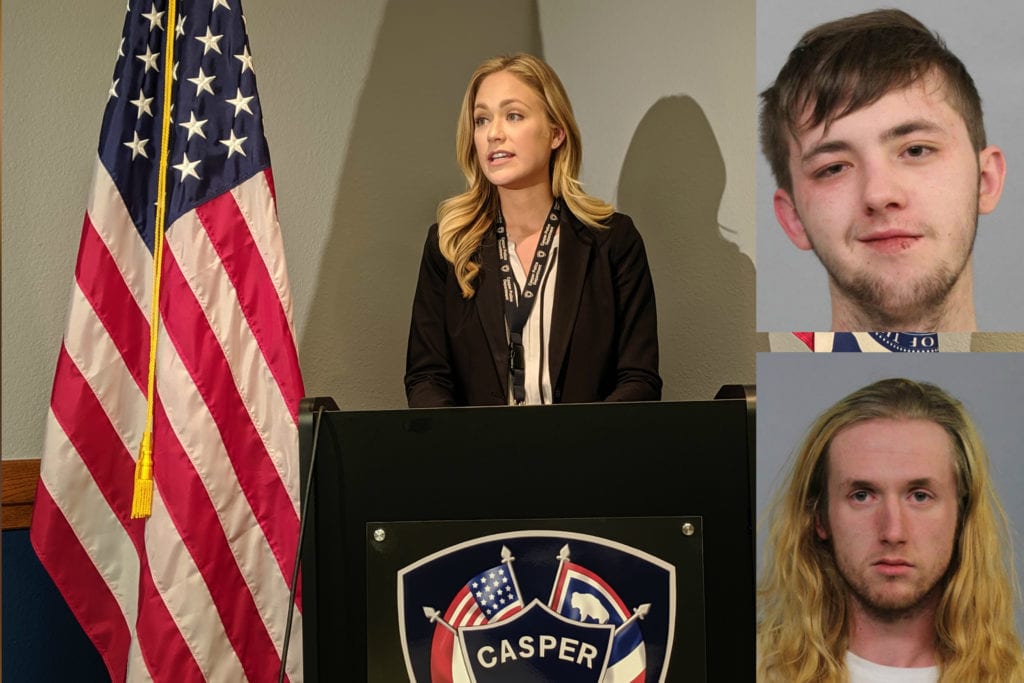 CASPER, Wyo. —  The Casper Police Department says that two men who were arrested in connection with a stolen car and stolen guns, are suspects in other crimes, and may face further charges.

At a press conference that was held just after 5:00 pm, August 29, 2019, Casper Police Department Public Information Officer Rebekah Ladd told members of the media that the the two men are also suspected in connection with burglaries, car chases, aggravated thefts, assaults, and “multiple other felony level crimes.”

The press conference took place just hours after the Casper Police Department and Special Response team served search and arrest warrants on a private home, on the 300 block of Colorado street in Casper. During the execution of the search warrant, a portion of Colorado street was closed, and some nearby homes were vacated. Ladd said that this was part of of regular procedure, to mitigate any potential threats.

At 11:56 pm on Wednesday, August 28th, Casper Police responded to the 800 Block of East First Street in Casper on a report of a vehicle theft.

Just before that response, officers reported they were in the area responding to an unrelated call when they observed a vehicle traveling at a high rate of speed and heard multiple gunshots being fired.

Ladd said, during the press conference, that the owner of the stolen vehicle had followed the suspects on foot, and also reported hearing the gunshots being fired.

Officers began pursuit of the stolen vehicle, but the suspect evaded police

A short time later, officers located the single occupant stolen vehicle outside of the 300 Block of North Colorado in Casper. Police report commanding the driver to exit the vehicle, however the suspect rammed his vehicle into a CPD patrol car and fled the scene in the stolen vehicle.

Later in the evening, officers located the vehicle again alongside another vehicle of interest that has been involved with multiple recent crimes in the area. After hours of investigation, Casper Police say that they had enough evidence to obtain a search warrant and an arrest warrant for the suspect involved in this vehicle theft.

No reports of injuries or property damage have been made in regards to the shots being fired Wednesday night.