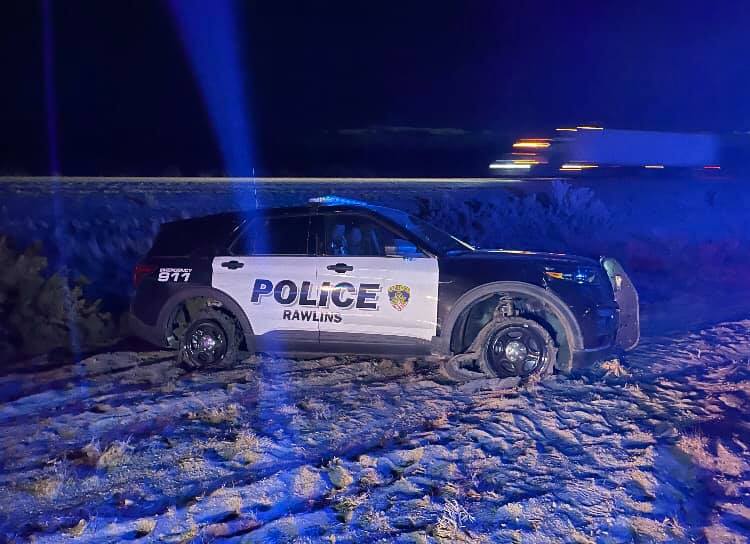 (Rawlins, WY) – Tampa, Florida resident James Estes was arrested on Friday afternoon for charges related to the theft of the police vehicle, fleeing, eluding and possession of a controlled substance. He also has a warrant for probation violation out of Placer County, California.

Just before 5 pm on October 8th, a Rawlins Police Department officer attempted to stop Estes who was riding a motorcycle for no visible registration, according to their press release. He did not pull over which initiated a pursuit that included the Wyoming Highway Patrol. Estes abandoned the motorcycle on I-80 and took off on foot.

“After a brief foot pursuit, the suspect was taken into custody, placed in handcuffs and secured in the rear prisoner area of the Rawlins Police Department’s patrol car,” according to the press release. “The suspect was able to slide his handcuffed arms to the front of his body, crawl through the center partition of the back cage, and stole the Rawlins Police Department’s patrol vehicle.”

“Wyoming Highway Patrol and a Rawlins Police Officer pursued the vehicle westbound on I-80. The pursuit continued through Sweetwater County to mile marker 119 where the suspect lost control of the vehicle in the center median, exited the police vehicle and fled on foot. After a brief foot pursuit, the suspect who was still in handcuffs, was taken into custody.”

No one was injured in this incident and the suspect now faces charges in both Sweetwater and Carbon counties.