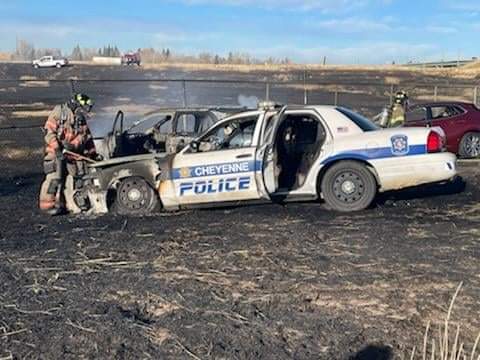 A suspect in a law enforcement chase that ended with a fire that damaged the suspect vehicle and two police cruisers has been officially charged in Laramie County Circuit Court.

Documents released by the Circuit Court Clerk’s Office show that the suspect faces a felony charge of Theft and a felony charge for Aggravated Eluding. The suspect’s arrest was announced by Cheyenne Police Department via social media on Friday November 18, 2021 just hours after the chase.

It was reported that a male, identified by police as Jason Nelson, 50, of Cheyenne stole a running and unattended Buick outside of a private residence.

“Responding officers used a cellphone left in the Buick and its OnStar security system to determine the vehicle’s location,” a Cheyenne PD statement said Thursday evening. “Around 1:45 p.m. officers located the Buick traveling northbound on Pinion Drive from East Lincolnway and initiated a pursuit.”

“The vehicle entered the westbound College on-ramp to I-80 and the OnStar system remotely slowed the vehicle down,” Cheyenne PD says.

The Buick reportedly swerved off of the ramp and into a field. Nelson then allegedly exited the vehicle and fled from officers on foot. At approximately 2:00 p.m. Nelson is said to have surrendered to officers while in the field.

“It only takes seconds for a thief to steal an unattended vehicle left running,” The Cheyenne Police Department reminds. “Keep vehicles locked to reduce theft and protect property.”

The case remains under investigation by the Cheyenne Police Department.

Circuit Court officials say that Nelson was given a $20,000 cash bond and faces a preliminary hearing at the end of the month. The result of that hearing will determine if the charges will be bound over to Laramie County District Court. All of those cited or arrested are presumed innocent until convicted in a court of law. Charges are subject to change following official filings from the Laramie County District Attorney’s Office.