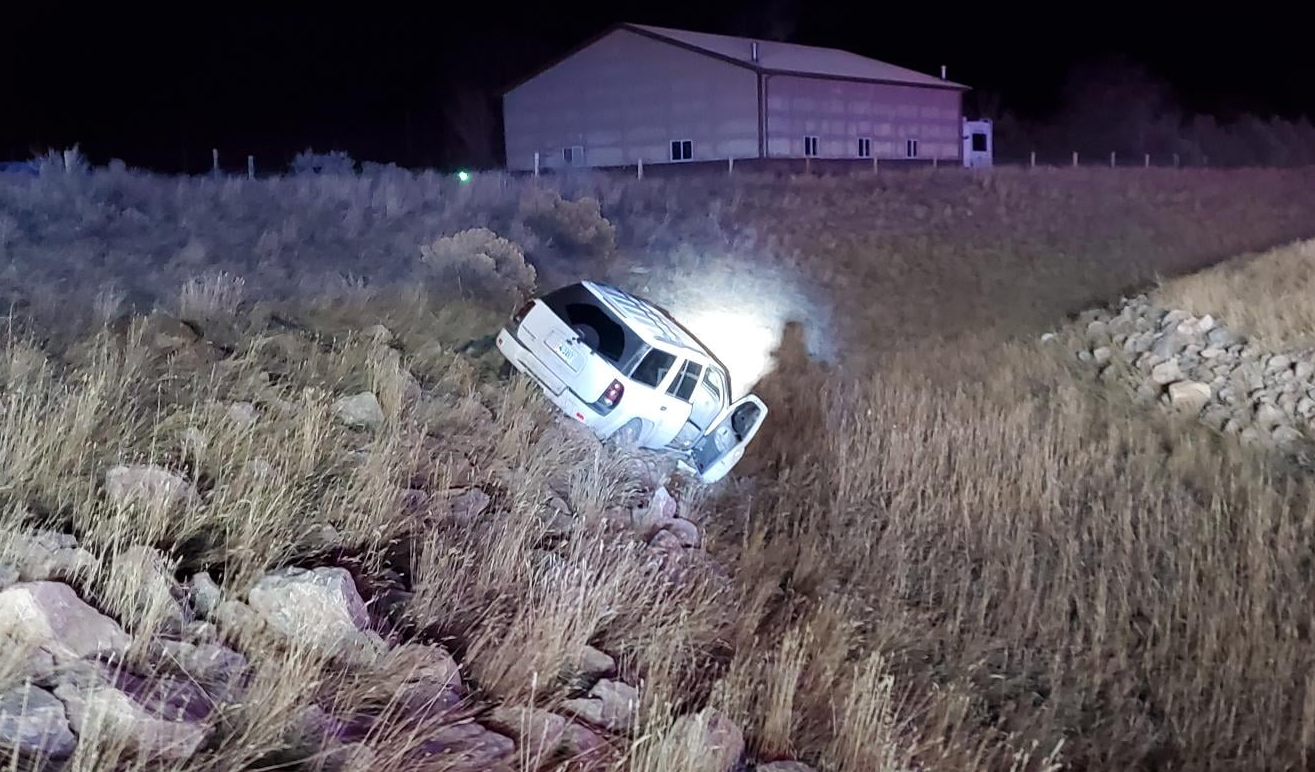 Suspect SUV in a ditch Sunday morning after a pursuit on I-25 (Evansville WY Police Department, Facebook)

CASPER, Wyo. — An attempted stop for a traffic violation early Sunday morning in Evansville touched off a high-speed chase on Interstate 25 that covered roughly 58 miles and required the assistance of multiple law enforcement agencies, the Evansville Police Department said in a release on social media.

No injuries to officers or the public were reported as result of the pursuit, which reached speeds of up to 120 mph, with the suspect vehicle driving in the opposite lane of travel, before ending in a drainage ditch near Douglas.

The driver, Louis Walker, is in custody on multiple charges, Evansville PD said.

Evansville PD officers on routine patrol observed a white Chevy SUV running a red light on West Yellowstone Highway around 2:40 a.m. Sunday. “The SUV then jumped the [curb] as it was going eastbound,” the release said. The SUV then went across a barrow ditch and proceeded onto Lathrop Road before pulling into the Comfort Inn and stopping.

“While officers were giving commands for the occupants to exit the vehicle, a passenger exited the vehicle on the rear passenger side and the vehicle proceeded to drive off again,” the release said.

Officers initiated a pursuit with the SUV again as the driver fled with two remaining occupants. The pursuit went east and then south into Casper on Blackmore Road.

“There was little to no traffic on the roads, so officers continued the pursuit as it went back to [WYO 20/26: the Old Glenrock Highway] and went east.”

As the pursuit neared Glenrock, officers from the Glenrock Police Department deployed spike strips. The SUV went over the spike strips and continued east through Glenrock at a high rate of speed.

“As the SUV neared I-25 to the east, the driver-side front tire came off the rim,” the release said. The SUV then went up the northbound off-ramp and proceeded south in the northbound lane, reaching speeds around 90 mph. Officers reported observing sparks coming from the rim with no tire.

About two miles west of the Natural Bridge Interchange, the SUV came to a stop and a male exited, at which point the SUV took off again, police said. The male was detained by one officer as others continued the pursuit.

“The male subject told the officer that there were weapons in the vehicle and that the two occupants would not go down without a fight,” the release said.

As the pursuit neared Douglas, officers again deployed spike strips. The SUV went over the spike strips and continued south in the northbound lane until it went off the road around mile post 137.

“The SUV came to a complete stop after going over some rocks that were on the bank of a drainage ditch,” the release said.

The driver and passenger were then taken into custody without any further incident. Officers found a loaded handgun in the vehicle after subjects were removed at gunpoint from the SUV.

“It was later determined that two of the subjects are not allowed to have firearms by law,” the release said.

The release notes that the driver indicated that there were drugs in the vehicle “as well as other information given about the males using cocaine earlier in the evening at a local establishment.”

The Evansville Police Department thanked all the agencies that assisted with apprehending the subjects.

“Officers of the Evansville Police will pursue any subjects who evade under Wyoming Statute 31-5-225 and bring them before the court,” the release noted.