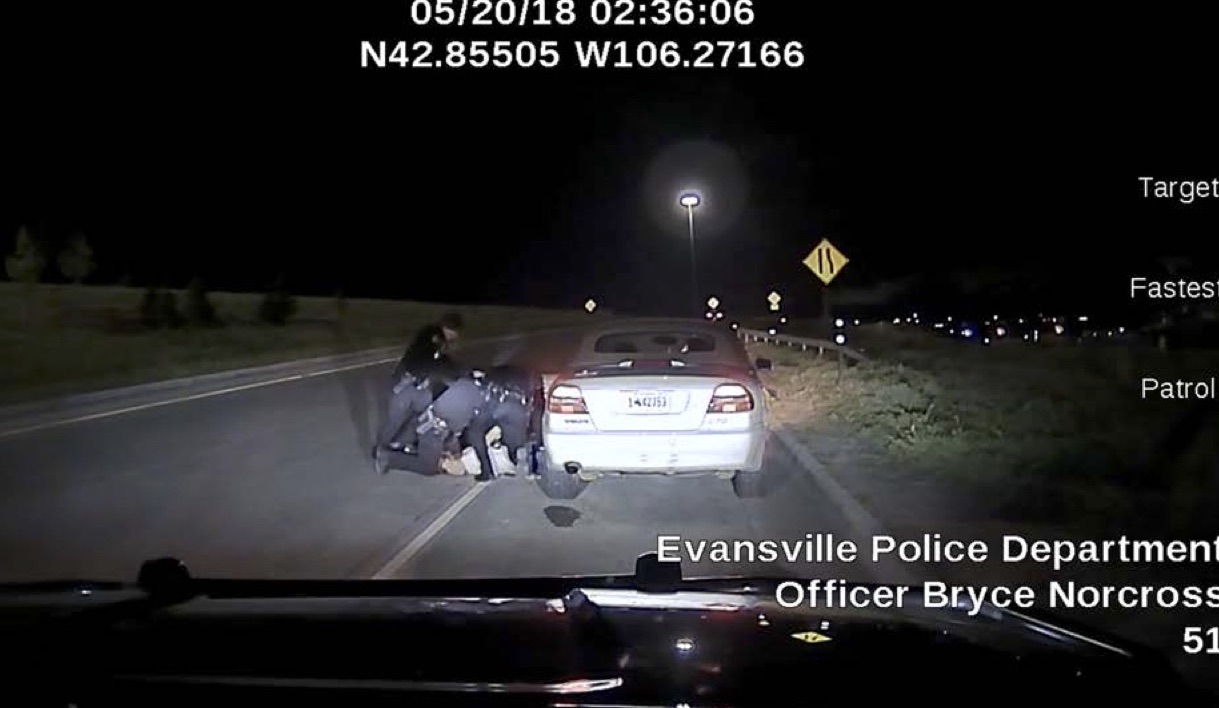 CASPER, Wyo. — Affidavits filed by three Evansville police officers stated that a passenger in a traffic stop refused commands and actively resisted arrest during the incident that left him with a head injury, because of which he is now suing the officers and the town.

Evansville Police Sgt. Luke Nelson, patrolman Matthew McGraw and patrolman Bryce Norcross are named as defendants in the suit filed last month in Wyoming District Court by Brandon Wuebker, who was arrested with two others in a May 2018 traffic stop.

Affidavits state that officer Norcross pulled the vehicle over after observing it fail to come to a complete stop at a stop sign. Wuebker was in the back of the two-door Volvo, and a female was in the passenger seat. Norcross stated that both the driver and Wuebker showed signs of alcohol intoxication.

Norcross stated that he observed that Wuebker was not wearing a seatbelt, and told Wuebker he must identify himself for being in violation of Wyoming’s seatbelt law.

Officer McGraw and Sgt. Nelson arrived while Norcross contacted dispatch and ran warrant checks, the documents state. McGraw said he contacted the driver for credentials and observed the other passengers with his flashlight.

McGraw said Wuebker objected to the light being shone on him, and that Wuebker continued to argue with him after being advised not to interfere with a traffic stop.

Norcross then interviewed and conducted field sobriety tests on the driver, who was arrested and charged with DWUI and failing to stop at a stop sign.

Both the affidavits and the civil complaint state that the female passenger verbally protested during the encounter. The complaint says the woman called Sgt. Nelson a “f—ing pig” and “f—ing a—,” and says Sgt. Nelson then “declared his own intention to retaliate and to ‘f— these people up.'”

McGraw’s affidavit stated that after the woman protested, “Sergeant Nelson responded by telling [her] that he would speak with her in a minute.”

McGraw and Sgt. Nelson stated that while the driver was being handcuffed, Wuebker opened the driver’s door, stating that he had to use the bathroom and would walk to a nearby gas station.

Sgt. Nelson advised Wuebker that he was detained and not free to leave, and shut the door. As the driver was placed under arrest, Wuebker again began to exit the vehicle, at which point McGraw advised him that he was under arrest, the affidavit states.

“Wuebker then started to push his way past Officer McGraw and [me],” Sgt. Nelson states. “At that time we attempted to grab ahold of Wuebker and place him under arrest.”

McGraw and Sgt. Nelson stated they then attempted to extract Wuebker, but he threw himself back into the vehicle to avoid arrest and then refused commands to exit.

In the civil complaint, Wuebker’s attorney says Wuebker was confused by conflicting commands.

Norcross stated that after securing the female driver in his vehicle, he returned to help officers as Wuebker “resisted arrest by means of physical force.”

McGraw states that he then attempted to use pepper spray on Wuebker, but it proved ineffective because the can was nearly empty. Norcross stated he activated his Taser, striking Wuebker in the chest.

Sgt. Nelson stated that the officers then dragged Wuebker to the ground, where he struck his forehead, causing a laceration over the right eye.

McGraw said Wuebker continued to resist arrest and attempted to roll away, at which point McGraw delivered two knee strikes to his side. Norcross stated he also delivered a short drive stun to Wuebker’s lower side, which ultimately proved effective in delivering compliance.

The civil complaint states that Wuebker “was not resisting the efforts of the officers to throw him to the ground.” It also emphasizes the “increasingly urgent” nature of Wuebker’s need to go to the bathroom, and that he informed the officers of the situation at the beginning.

Officers stated the female passenger became “verbally combative and noncompliant,” and she was placed in an arm bar in order to be handcuffed and charged with interference. Sgt. Nelson stated Wuebker continued to scream and curse at officers at this time.

EMS and a Casper police officer were called to the scene, and Sgt. Nelson and McGraw stated they took Wuebker to the Wyoming Medical Center, where he was evaluated but refused stitches, stating he did not want to pay. Wuebker was then booked on charges of obstructing a peace officer, though the charges were dropped in February 2019.