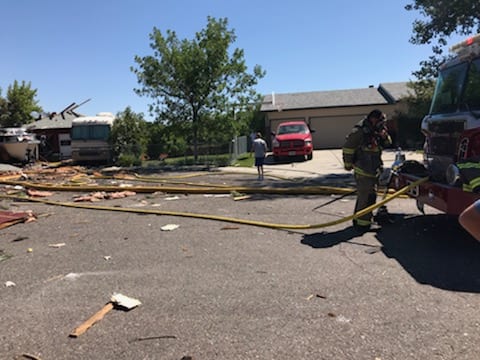 CASPER, Wyo. — Five homes have been classified as “unable to occupy” after being damaged by a Labor Day explosion rocked a Casper neighborhood near the intersection of West 39th Street and Plateau Place in Casper.

Debris from the incident damaged over a dozen nearby residences. Once the scene was secured, City of Casper Chief Building Officer Dan Elston in partnership with Electrical Inspector Shawn Barrett arrived to examine several of the damaged residences.

Inspectors evaluated seven homes which showed obvious signs of structural damage on the 3800 Block of Plateau Place as well as the 3700 and 3800 Blocks of Arroyo Drive in Casper. Five of those homes were deemed as “unable to occupy.”

“Investigation into the cause of the Plateau Place home explosion in Casper remains active and ongoing,” the Casper Police Department said in a joint release on Tuesday evening.

Officials say that City of Casper Building Inspectors, Casper Fire-EMS, and the Casper Police Department have been working since the event occurred around 12:30 pm on Monday, September 2, 2019 to secure and investigate the scene.

At this time, no injuries or deaths have been reported as a result of this incident.

Thus far, the joint CPD and CFP investigation has revealed that the residents of the home were not inside at the time of the incident. The home sustained a significant amount of damage and spread debris across an estimated two block radius.

“We are extremely grateful that no one was injured yesterday,” said Casper Fire-EMS Public Information Officer Dane Andersen. “Although no one was physically injured, this tragedy has severely impacted many of our neighbors. We take it as a personal responsibility to help them in any way we can.”

City of Casper crews along with local contractors have been working to remove and clear the area of dangerous debris.

Rocky Mountain Power and Black Hills Energy crews responded immediately and shut off power and gas to surrounding homes as a precaution while the investigation took place.

The Bureau of Alcohol, Tobacco, Firearms and Explosives out of Denver, Colorado also responded out of an abundance of caution.

At this time, their investigation is ongoing.

The Casper PD says they are in the final stages of investigating the incident.

“Thorough investigations take time,” said Casper Police Department Public Information Officer Rebekah Ladd. “A joint investigation with the Casper Fire Department means we have incredible expertise to get to the bottom of what happened. Our community’s safety is always the first priority.”

One intersection near Plateau Place, in Casper, is the only location that remains closed as a result of this incident. Crews estimate the intersection to be open on Wednesday, September 4, 2019.

City Officials have made contact with the displaced residents, all of whom are staying with friends or family.

The Casper Police Department has been and will continue to provide around the clock security to this scene and the impacted homes in the area.

Residents with homes damaged by this incident are encouraged to contact their home insurance companies.

A few of the impacted homes have had the power turned off as Rocky Mountain Power crews work to investigate the incident. If your home is without power, please call Rocky Mountain Power at 888-221-7070 to receive an update or to request for your power to be turned back on. For questions or concerns in regard to natural gas, please contact Mike Howe with Black Hills Energy at 307-235-8325.

The Casper Fire Department is also available to assist those impacted by this incident, please call Dane Andersen with Fire Station 5 at 307-235-8325.

If you have been affected by this incident and need further assistance, please contact the Casper City Manager’s office at 307-235-7554.

“We ask that community members please continue to avoid the area as much as possible while emergency crews and law enforcement complete a thorough investigation,” the release closes.

More information will be published as it becomes available.