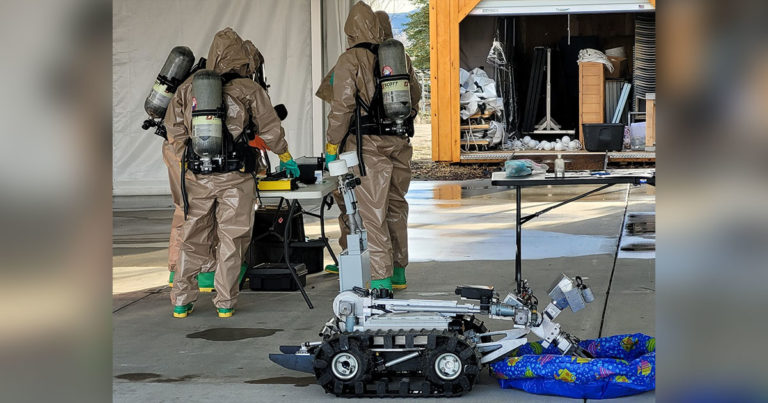 Emergency responders responding to the Museum of the Mountain Man in Pinedale on Wednesday. (Sublette County Unified Fire via SweetwaterNOW)

CASPER, Wyo. — Emergency response teams were deployed to the Museum of the Mountain Man in Pinedale on Wednesday afternoon after museum staff found an antique bottle that was later confirmed to contain a small amount of concentrated nitric acid, Sublette County Unified Fire said in a press release Thursday.

“The antique bottle was presumably donated to the museum and was stored in the basement,” the press release states. “When museum staff discovered the antique bottle, they contacted the fire department to identify and dispose of the hazardous material.”

Sublette County Unified Fire responded and also enlisted the assistance of a Regional Emergency Response Team out of Rock Springs, who responded along with the Sweetwater Bomb Squad.

The bottle was safely removed from the museum by hazardous materials technicians on the Regional Emergency Response Team.

“Because the antique container was crystallized and potentially unstable and reactive, the Sweetwater Bomb Squad used a bomb robot to open the container and allow the Hazardous Materials Technicians to test and definitively identify the substance,” the press release adds. “Due to the instability of the product, specialists from the Regional Response Team and Sweetwater Bomb Squad determined the safest way to dispose of the nitric acid was to detonate it in the parking lot of the museum rather than attempt to transport it.”

Bomb technicians were able to safely detonate the nitric acid in the parking lot, according to the release. Hazardous materials technicians collected the remains for disposal after the detonation.

The release notes that nitric acid is a colorless liquid that can cause “severe health hazards, is very toxic by inhalation, and is very corrosive through skin contact.” The antique bottle it was found in appeared to have been from the 1870–1890s and Sublette County Unified Fire said it is unknown how long it was stored at the museum.