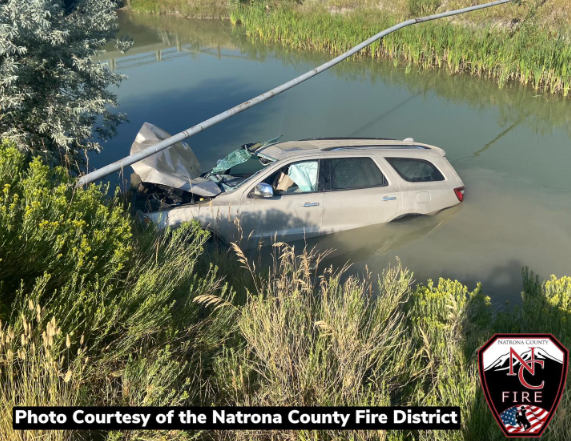 A vehicle crashed into a large canal off of U.S. Highway 20/26 west of Casper on Wednesday morning. (NCFD, Facebook)

CASPER, Wyo. — Emergency crews responded Wednesday morning after a vehicle reportedly drove off U.S. Highway 20/26 into a large irrigation canal near mile post 16, according to the Natrona County Fire District.

“A single occupant was still in the vehicle on arrival with the patient’s head and chest above the water,” NCFD said. “The patient was uninjured from the accident but was unable to get out of the vehicle.

“Crews worked to quickly extricate the patient from the vehicle, and assist them up the canal side.”

The person was assessed by medical personnel on scene and released without injuries, NCFD said. The person said they were heading back to Casper, accidentally fell asleep, veered into oncoming traffic and went into the canal, NCFD added.

“We would like to take this time to remind everyone to remain attentive while driving,” NCFD said. “This incident could have turned out a lot worse; but thankfully, everyone was able to walk away from the incident. If you are feeling tired or afraid that you may fall asleep before you arrive, pull over and rest.

“Be sure to put your flashers on if you do pull over and get as far off the lane of travel as safely as possible. Walk around away from traffic, get your blood flowing, stretch out, or even nap! Caffeinated beverages can only go so far sometimes. Putting yourself or others in danger by continuing to drive when tired isn’t worth the risk, even if you have your destination in sight.”

The Wyoming Highway Patrol is investigating the incident.