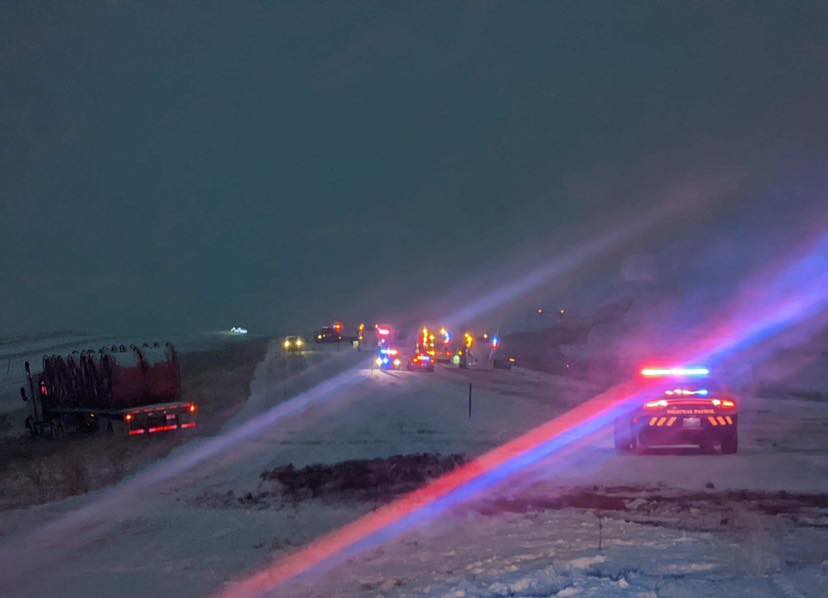 Multiple crashes were reported on I-25 south of Casper on Monday afternoon. One crash involved a bus that crashed into vehicles that were stopped on I-25 from a previous crash, according to the WHP. (WHP, Facebook)

CASPER, Wyo. — The driver of a 2009 Motor Coach bus died as a result of injuries sustained in a crash on Interstate 25 on Monday afternoon, the Wyoming Highway Patrol said in a press release Tuesday.

The driver has been identified as Casper resident Timothy R. Hunter, 65. He died at the Converse County Memorial Hospital after the crash. Hunter was wearing a seatbelt at the time of the crash, the WHP said.

Thirteen passengers of the bus were transported to the Converse County Memorial Hospital due to injuries they sustained, the WHP added.

The WHP was notified of the crash at around 4:30 p.m. Monday. The crash occurred near milepost 147.5 on southbound I-25 north of Douglas.

The bus came upon a prior crash while heading south along the interstate and the driver was unable to avoid the stopped vehicles from that crash, the WHP said.

“The Motor Coach collided with the stopped vehicles and caused damage to a third vehicle that was also stopped in front of the previous crash,” the release said. “The drivers of the vehicles involved in the previous crash were not injured.

“The roadways were ice- and snow-covered at the time of the crash.”

Driving too fast for the conditions is being investigated as a possible contributing factor to the crash, the WHP said.