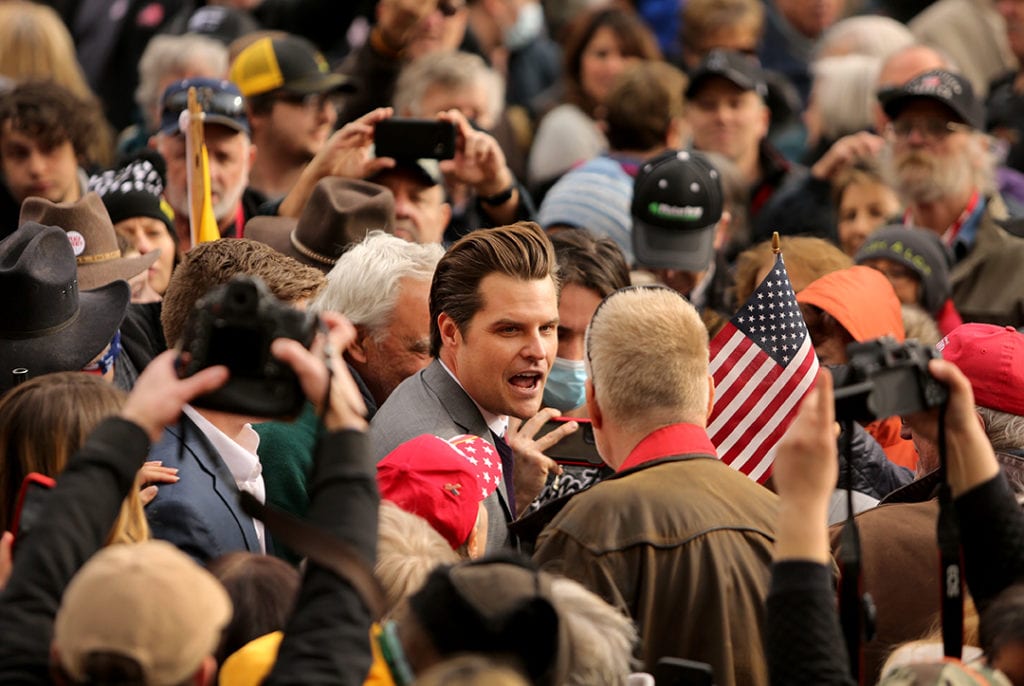 U.S. representative for Florida's 1st congressional district Matt Gaetz is surrounded by supporters after giving a speech on the steps of the Wyoming State Capitol building on Thursday, Jan. 28, in Cheyenne. Gaetz, an avid Donald Trump supporter, has made national headlines after attacking Wyoming Rep. Liz Cheney for her vote to impeach Trump. (Dan Cepeda, Oil City)

Gaetz, a close ally of former President Donald Trump and his family, has drawn national attention after attacking fellow Republican, Wyoming Rep. Liz Cheney for her vote to impeach Trump for helping to incite a mob that overran the U.S. Capitol building early in January.

Gaetz is riding a wave of anger at Rep. Cheney among Trump supporters, including those in Wyoming, which carried Trump by nearly 70 percent in 2020.

The crowd swelled in the center of the Capitol plaza into the lawns on each side. One estimate from a Wyoming Highway Patrol officer guessed the crowd at nearly 800 people. Numerous vehicles with Colorado plates were seen parked along the streets near the Capitol.

“I love Wyoming,” said Gaetz as he started his speech that was filled with populist and anti-Washington insider points. “My first trip to Wyoming and I feel like I’m at home.”

After talking for about 45 minutes, often drawing chants and applause along the way, Gaetz wandered into the crowd to greet supporters, sign autographs, take selfies and pose with babies.

A small group of counter-protesters argued with Trump supporters, but the affair was otherwise drama-free.