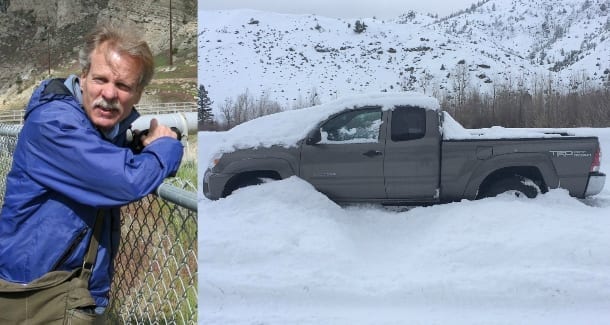 The Park County Sheriff’s Office is seeking information on a Powell man who has been missing since Tuesday, January 31st. Gibson “Gib” Lee Mathers, age 61 of Powell was last heard from on Tuesday morning when he spoke to his employer at approximately 7:30 a.m. His pickup truck was subsequently discovered on Friday, February 3rd by a Wyoming Highway Patrol trooper. It was abandoned in a “pull out” on Highway 14-16-20 west approximately half-a-mile west of the Wapiti Campground, 30 miles west of Cody. The area is commonly referred to as the North Fork.

Mathers, described by his friends as an avid hiker and photographer often frequented the North Fork, an area that “he absolutely loved.” Mathers was observed by a local mail carrier on Tuesday (1/31/17) around 11:00 a.m. parked on the highway between the Wapiti Campground and Elk Fork Bridge. He appeared to be taking photographs to the north, shooting out the passenger window of his truck. The carrier once again observed Mathers’ truck parked in the pullout at around 1:30 p.m. Mathers was not seen at that time. The carrier could not provide a description of Mathers’ clothing.

Members of the Park County Search and Rescue searched the area all day Friday and Saturday with no success in locating Mathers. The search has been subsequently halted due to conditions in the search area. “Our search teams were having to wade through heavy waist-deep snow in order to look for Gib,” commented Sheriff Scott Steward. “Our search dogs could not even get through the snow. They were limited to searching along the highway.” Steward also said that the search was further complicated by the fact that searchers have no idea what happened to him, his intentions, or direction of travel from his truck.

The area of the search already had snow covering up to 2 feet in depth on Tuesday when Mathers was last seen. A subsequent winter storm on Wednesday and Thursday deposited an additional 12 to 14 inches of snow in the area, covering up any trace of Mathers’ direction of travel. “We’ve searched any and all areas we think that Gib may be, especially given he was a photographer,” said Steward. “We also searched under bridges, along cliff sides and anywhere where he may have taken shelter. But with no evidence as to exactly which way he went, there’s simply too much area to cover in these conditions. When conditions in the search area improve, we will continue to look for him.”

At this time, there is no evidence of foul play. Sheriff Steward is hoping that someone will come forward with additional information. “We’re really hoping that someone remembers seeing Gib on the North Fork on Tuesday and can tell us what he was doing, what he was wearing and most important where he was and which way he was headed.”

Mather is a former Casper resident and Casper College alumni. Shortly after the turn of the millennium, he functioned as editor for the Casper College Chinook, a newspaper for the school.

Anyone with any information is asked to contact the Park County Sheriff’s Office at 307-527-8700.