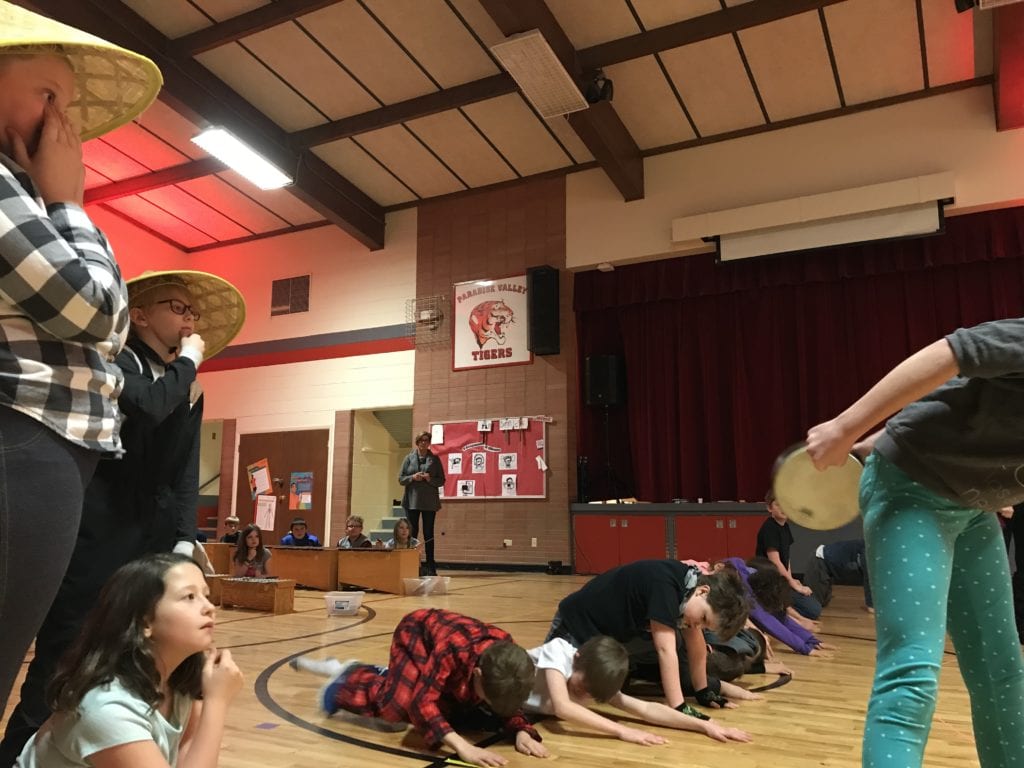 The students will be at the Nicolaysen Art Museum on the following Friday, February 1 to celebrate the start of the Chinese New Year. This year’s animal: the pig.

Fourth graders were crowded into the gym on Friday, preparing music and dance for their performance. They’ll put their efforts on display at PV on January 31 before the school heads over to the Nic for their February 1 activities. PV’s Chinese New Year celebration at the Nic will help raise funds for a student trip to China and the Nic. There will be performances, a cultural presentation, art sale, raffles, traditional Chinese crafts plus food and drink.

As the fourth graders practiced their instruments and dance, Paradise Valley music teacher Nathan Gurtler called out directions to tighten up the performance.

“You have to show us your character by how you walk,” Gurtler said to the students, this part of their day, at least, in English.

But then one fourth grader approached the podium and began to narrate the performance–in confident, fluid Mandarin.

“I have to speak Chinese for at least one whole week,” another student told Oil City, again in Mandarin. “I’m going to China.”

Second grade teacher Kathy Jhao is one of the Mandarin instructors at the school. This is her fourth year with the dual language immersion program at PV and she helps some of the other Chinese instructors adjust to life in Casper. Jhao said most have graduated from American universities, so the transition isn’t too difficult. There is one Chinese teacher for each grade, so students receive instruction in Chinese for at least half of the day. Jhao said that even first grade students are able to do math and other subjects in Mandarin.

“When kindergartners come into the program, the teachers start to tell them, ‘Don’t speak English, speak Chinese,'” Jhao said. “Our teachers are really warm and friendly and students start to understand quite quickly.”

Jhao explained that listening comes most naturally to students learning a second language so the program emphasizes this during the first couple grades. Writing is the most difficult language skill and is something that really gets going in fifth grade.

PV Principal Brett Thielbar is in his first year with the program and explained that Paradise Valley is run like any other school, with the small caveat that students here are budding masters of Mandarin.

“We have the same standards as the other schools in the district,” Thielbar said. “Our core curriculum is the same. We even have a Chinese ESP (an assistant teaching position common at school’s throughout the district) who moves around the different classrooms and helps give our kids some additional help.”

On Friday, the PV assistant teacher was busy working with third graders. Oil City asked the students what they were doing.

Out in the hallway, a man smiled as he walked past Thielbar on his way into the third grade classroom.

“That’s [the ESP’s] husband,” explained the principal. “He’s a volunteer. After he got cleared by the district he started coming in to help work with the students. You can see we’re really like any other school in that way.”

“The only difficulty is when students move away,” he said. “When, say, a fourth grader leaves, we can’t just put another kid in that classroom. They wouldn’t understand what was going on. But a lot of parents really love the program. We’ve had a family alternate weeks between here and North Dakota because they wanted their kid to stay involved in the program.”

Some of the fourth graders were excited about their Chinese New Year celebration.

“This year it’s the pig,” one student said. “Last year it was the chicken. Or wait, was it the goat?”

“We’re supposed to make a bacon joke,” his classmate chimed in. “But we still have to think of a bacon joke.”

These two fourth graders said they enjoy getting letters from their pen pals in China. But its the fifth graders who have the option of joining that trip to China. Jhao said those students will get to go see some famous sites in China like the Great Wall and go visit Sichuan Province, home of the panda.

That’s why they’re hoping people will come celebrate with them at the Nic February 1. The celebration will go from 5:30 to 8 p.m. The entrance fee for adults is $5. Children are $3, with kids two and under free. Casper College is sponsoring the PV festivities at the Nic, according to the event’s Facebook page.