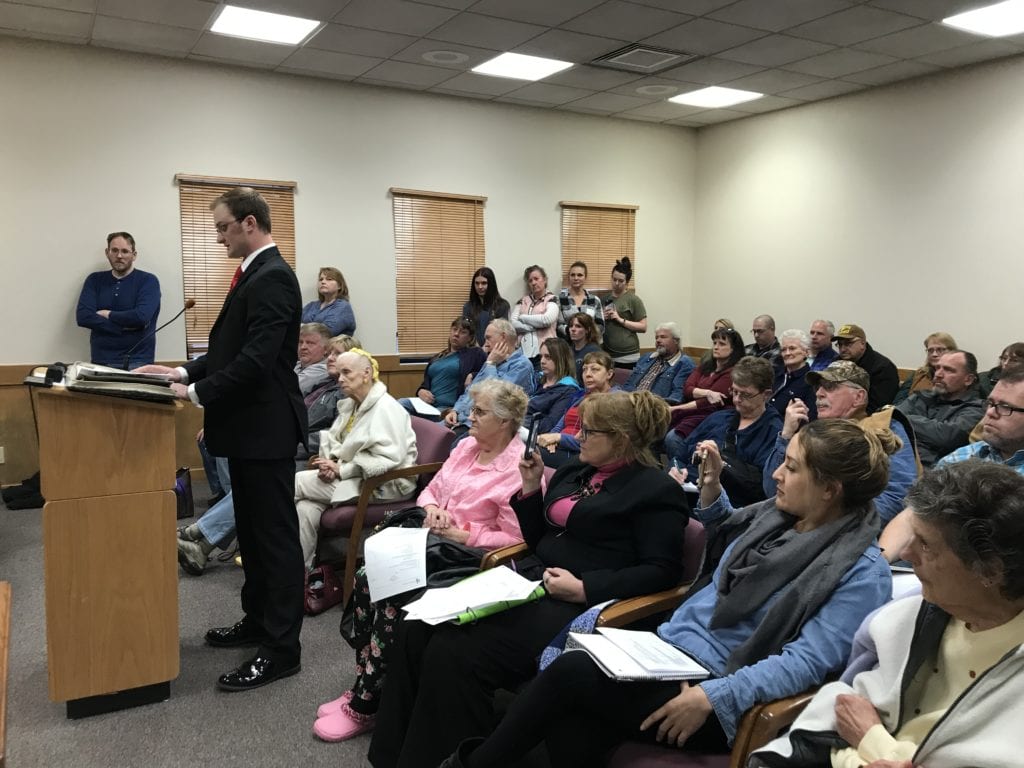 CASPER, Wyo. — Mills Professional Firefighters representatives and members of the public gathered in the standing-room only Mills Town Council meeting room on Wednesday, May 22.

The fire fighters were there to express opposition to the Town Council’s decision to cut the Mills Fire Department. After June 30, Mills will retain only a fire administrator unless the decision is rescinded.

Mills Mayor Seth Coleman said that the Town Council is considering two options to provide emergency services after June 30. One would be to contract with the Natrona County Fire Protection District. He said Mills would need an answer from the district by May 28 on whether they could accept the proposal.

Coleman said the second option would be to contract with a fire service company to provide services to Mills.

One citizen asked Coleman whether such a company would hire locally and whether it would save the Town money.

Coleman was unable to answer her questions specifically.

Mills fire fighter Tyler Houser spoke on behalf of the Mills Professional Firefighters. He read a statement during the meeting.

“The idea to close the Mills Fire Department completely disregards the safety of citizens and the taxpayers,” he said.

He received applause following his statements. Much of the statement was included in a Wednesday press release.

Houser also said the union was still open to negotiating with the Town, but had received a letter on May 2 from the Town saying they would not negotiate.

One citizen asked the Council to reopen negotiations, receiving applause from the room.

Coleman deferred to the Town’s attorney to answer whether negotiations could be reopened. However, he was also unable to answer the question.

Houser also said that the union acknowledges that Mills has some funding concerns, but pointed out that the Town is not operating in the red and that the fire department would finish the year under budget.

“By abolishing the fire department, that leaves 912 times that our citizens are left to wait for the emergency help they expect and deserve,” Houser said.

His statement said that the fire fighters engaged in efforts to compromise with the Town Council, but these efforts were ineffective.

“During recent contract talks with the mayor and administrators, the fire fighters made several offers that would help keep the fire department open, but were met with silence by the town management,” Houser said.

Another citizen reminded the Council that they could be voted out of office and urged them to reconsider their decision.

Mills citizen Leah Juarez asked for Coleman to resign. Other citizens passed around a paper seeking names of those in attendance who would support a recall of the members of the Town Council.

Juarez also asked how each of the Council members voted. Councilwoman Sara McCarthy said she was absent during the decision. The other members all said they consented to the decision.

Juarez disputed that One-Cent funding could not be used to fund a fire department. She also said she’d consider running to sit on the Town Council and help resolve the issues herself.

She suggested redirecting One-Cent funding intended for river front improvements be redirected to pay for the fire department.

Another citizen said he was concerned the cuts could extend to other departments. He also asked whether Council had explored grant funding options.

Houser chimed in at this point, saying that a “Safer grant” could be applied for to help cover personnel costs. He said that the window to apply for that grant would open soon and that it is frequently awarded to assist in situations like the one Mills finds itself in.

He said there were also other grant funding avenues the Town could explore.

Coleman said that grant writers have advised the Town to hold off on applying for grants for a few years.

Dari West said that she thought the Town Council’s argument that towns similar in size to Mills don’t have fully staffed fire departments was not a good argument because Mills has a lot of industry and the airport causes a lot of traffic in the town.

“I feel like this is a very rushed decision,” she said.

Coleman said during the meeting that the Town Council is still open to other ideas. He said that some ideas generated at the previous Council meeting needed to be checked for legality.

“We are doing the best we can to solve the issues that we have to the best of our ability,” Coleman said.

The Council also reminded the public that they can attend work and budget sessions in addition to the regular Town Council meetings.