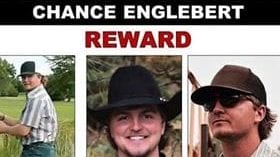 CASPER, Wyo. — The status of a Moorcroft man reported to be missing by the Gering, Nebraska Police Department on Saturday, July 6 is still unclear.

Gering PD Officer Shawn West said that Chance Englebert is under no criminal investigation. Were he to contact law enforcement officials face-to-face wherever he may be, they could confirm his identity and status and West said that the case would be considered closed once the Gering PD had received confirmation.

The only exception to this would be if an individual were to falsely stage an abduction or something along those lines. Since Englebert has only been reported as missing, providing accurate information to police about his whereabouts comes with no criminal consequences.

A Casper resident had reported seeing Englebert at Casper’s east side Walmart at about 6 pm, Friday, July 12.

But West said on Wednesday, July 17 that Walmart had reviewed more than six hours of video surveillance footage and were unable to identify Englebert’s encounter with the woman who reported it.

They were also unable to identify him entering or leaving the store. West said that Walmart video surveillance quality tends to be good, so it is unlikely to have been Englebert.

However, he did not rule out the possibility entirely since the woman stated that she’d had a pretty clear eye-to-eye encounter with the invidual she thought was Englebert. He said it was possible the encounter occurred in an off camera area of the store.

Gering PD has received multiple reported sightings of Englebert across Nebraska and Wyoming. West said that there is no clear pattern to the sightings, though many have come from the Gering area.

He said that other sightings were reported in Casper on July 11. Those reports said that someone resembling Englebert was seen hitchhiking along I-25.

But officials who went to check out the area were unable to locate any hitchhikers, according to West.

None of the reported sightings have proven conclusively to be Englebert, and several have been ruled out.

Englebert’s last residence was in Moorcroft, Wyoming, but he had been visiting relatives in Gering at the time he was reported missing.

He was reported to have gotten into an argument with his family on July 6, according to West. He was last seen leaving the home on foot at about 7:30 pm.

West said that Englebert apparently told friends he was walking in a ditch toward Torrington and told friends that he wanted them to come pick him up.

Due to a major thunderstorm that evening, West said that police thought it important to help locate Englebert due to concerns about his safety.

West didn’t want to speculate too much about Englebert’s current status. He said that there is currently no evidence of any foul play. Since Englebert has not engaged in any confirmed financial transactions, West said that it is not possible to rule anything out at this point.