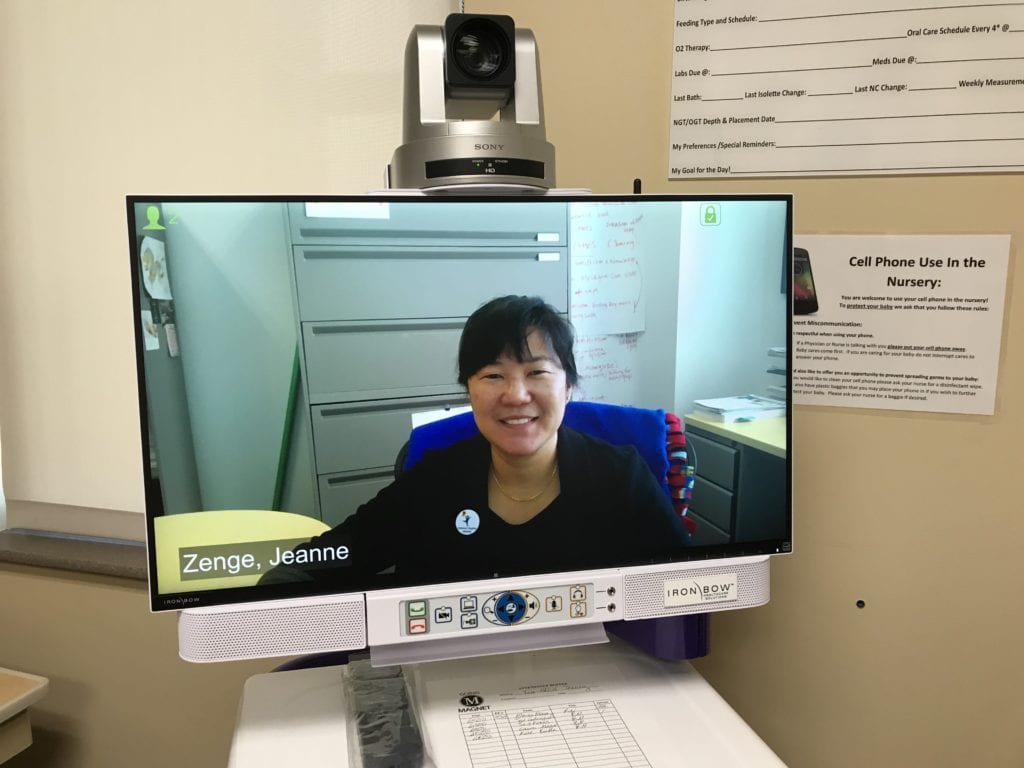 Dr. Jeanne Zenge demonstrates the new video technology, talking about it from her desk in Colorado. (Brendan LaChance, Oil City)

A new “video-based tele-neonatology service” will launch in October. That service will enhance the consultation between medical experts at the WMC and Children’s Colorado.

“This is actually the first place we’ll be doing this,” Dr. Jeanne Zenge, the co-medical director of the WMC’s Neonatal Intensive Care Unit said in an interview demonstrating the technology via video on Wednesday, Sept. 18.

While 24 hour phone consultation between WMC and Children’s Colorado is already in place, Zenge says the video technology will expand what this consultation is able to offer.

“Not only could we see the [WMC infant care] provider, but we could also see the patient,” she says.

She gave an example of how the video technology could enhance services. If an infant displays abnormal movements, this could be a sign of seizure or it might not be a problem at all.

If an infant at the WMC is displaying such abnormal movements, the tele-neonatal video unit would allow the Casper-based pediatrician to show these movements to one of the Children’s Colorado specialists, who would be able to help determine whether the movements point to a serious medical condition or are more benign in nature.

That could save Wyoming families from having to travel to Denver to have such movements diagnosed.

Katie Caldwell-Burchett says that when her daughter Olivia Caldwell exhibited such abnormal movements, that went un-diagnosed for some time.

“We saw abnormal movement in her for months before she was diagnosed [with brain cancer],” she says.

Olivia died of brain cancer when she was just over 20 months old.

“The ability for them to see patients like that is amazing,” Caldwell-Burchett said. “[Olivia] could have been diagnosed sooner.”

While the technology may not have been able to save her daughter’s life, Caldwell-Burchett says that giving Wyoming families access to expert health advice without having to travel to Denver will be a big benefit.

The Olivia Caldwell Foundation not only supports the Care Alliance between the WMC and Children’s Colorado, but they are also funding a new “Pediatric Specialty Clinic” to open near the WMC campus in November.

That will bring pediatric specialists from Denver to Casper on a monthly basis.

Both the clinic and the new video technology could help families avoid the cost of traveling to Colorado for medical services.

“The idea is that you would hopefully be able to keep more patients in Casper,” Registered Nurse Kate Buffa, the WMC’s manager of Pediatrics and Birthplace says.

While some patients may still need to be transferred to Colordado, Buffa says the video technology “is going to elevate the care that we can give the community.”