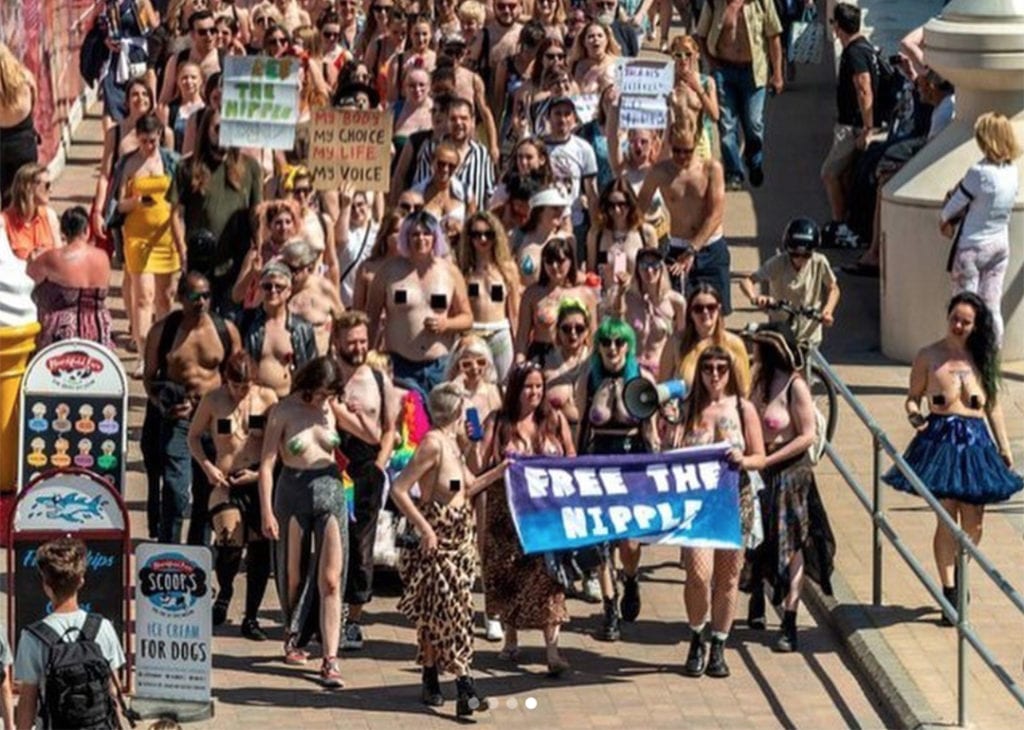 Marchers with the Free the Nipple campaign walk through Brighton in June. The movement argues banning female toplessness is discriminatory. (Instagram)

Her vehicle is a small Honda Metropolitan scooter with butterflies stenciled on its red front fender, and her helmet sports colorful streamers that flow in the wind.

She is also topless.

“I’m doing it because I can and I choose to,” said Russell. “It should be normal for women to go topless.”

The public’s response to her has been mostly positive, she says.

A ruling this year in a Fort Collins, Colorado courtroom has given Russell the bravery she needed for her scooter rides.

For Wyoming it all started in 2017, when a lawsuit by the activist group Free the Nipple argued that a ban on female toplessness in Fort Collins was unconstitutional because it only applied to women.

According to the Fort Collins Coloradoan, even as the lawsuit made its way through the courts, the city council recently removed references to that policy effective last September. However, the ban hadn’t been enforceable since 2017 after a district court judge ruled it was discriminatory.

The case continued to the 10th Circuit Court of Appeals, which ruled 2-1 against the policy in February 2019.

“We’re left, as the district court was, to suspect that the City’s professed interest in protecting children derives not from any morphological differences between men’s and women’s breasts but from negative stereotypes depicting women’s breasts, but not men’s breasts, as sex objects,” wrote the majority in the final decision.

After spending $120,000 on its defense, the city of Fort Collins decided not to appeal to the United States Supreme Court, where there was no guarantee that it would be heard.

“Generally speaking the guidance that came from the 10th Circuit indicates that when it comes to indecency laws if they’re expressly disparate between female and male laws, they’re probably not constitutional,” said Casper Police Chief Keith McPheeters.

“So what that forces us to do is take a look at our own ordinances and ask those questions.”

“The city attorney’s office is already aware of this and working on seeing if it’s applicable to us,” he said.

The city’s current indecency ordinance concerning public nudity covers what McPheeters describes as “an intent crime.” It specifically prohibits public nudity by exposing “his or her intimate parts with the express intent of arousing the sexual desire of himself or herself or of another person.” The same ordinance covers public sexual acts.

“So that law doesn’t say that it’s illegal to expose your female breasts, what it says is that it’ll be illegal to arouse somebody else sexually.”

McPheeters added that even without the 10th Circuit Court’s ruling, breastfeeding in public has long been legally protected in Casper.

“In the end the police department is committed to protecting the constitutional rights of every citizen,” he said.

The Free the Nipple campaign is a growing feminist movement aimed at ending sexualizing and stigmatizing women in societies. The organization’s signature #FreeTheNipple hashtag has become a rallying cry for equality on social media.

While the group’s lawsuit that ultimately initiated the 10th Circuit Court’s ruling was successful, other cases haven’t ended so well.

For Russell, who is still dealing with the trauma of sexual abuse as a child, she sees “freeing the nipple” as empowerment for women.

“The stigma of breasts being sexualized at this point in history is not only antiquated, it’s ridiculous,” said Stacie Metzker, a friend of Russell who supports her topless scooter rides and the message it sends.

“Men can mow their lawn topless, ride a scooter through town topless…as women, we know breasts are made to feed babies, and unfortunately in our society they are still sexualized,” said Metzker.

“If people are offended by it, they need to ask themselves why.”