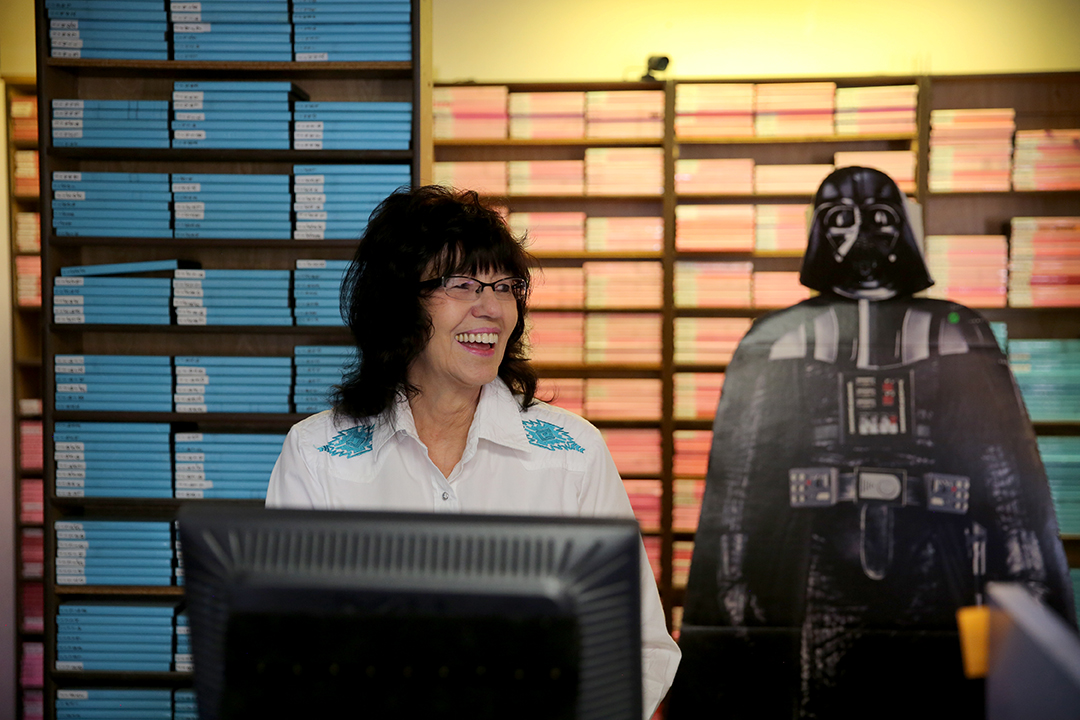 Sissy Bredenberg talks to a customer while looking up a title on the computer at Videos To Go recently in Mills. The store is closing after more than 30-years in business. (Dan Cepeda, Oil City)

CASPER, Wyo. — Rita Spiva stopped in on Videos To Go in Mills on Friday like she’s done countless times before.

Spiva lives about 10 miles away out in the country, loves watching westerns, and proudly has no internet or cable TV.

“I don’t want it,” she says. What she does want is for Videos To Go owner Sissy Bredenberg to change her mind.

“You can’t quit on me,” she tells Bredenberg.

But it’s too late to change her mind. After surviving years into the downloading and streaming era, outlasting national chains like Blockbuster and Hollywood Video, and even after a slight uptick in business during the pandemic, the little video store in Mills and the last of its kind in the county has stopped making enough money to stay open.

“I would’ve stayed open, but it just slowed down enough that it’s not profitable,” she said. Post-pandemic activities and warmer weather makes her remaining loyal customers want to be outside rather than renting videos, she says. “I don’t blame them.”

But even so, the decision was far from easy. “For a few days there it was tough on me, but once I actually made up my mind and said ‘okay, now you don’t have a choice,’ I’ve gotten better about it.”

“I’ve been here a long time, so…” she says as her voice trails off.

There might be around 10,000 DVDs and blu-ray discs inside the store, and all are for sale at $10 each for now. She’s also got likely “a couple thousand (VHS) tapes” she’s letting go for around a buck each.

“There was a guy from Birmingham, Alabama, who wanted a special tape, and I actually had it so I sent it down to him,” she said. The man had cold called dozens of stores looking for the title specifically on VHS before calling her. She can’t recall the title, but she says the call “surprised me.”

She’s slowly unloaded hundreds of VHS tapes over the past several years, usually to collectors such as the Alabama man looking for some long-forgotten, out-of-print gem or odd edit that sometimes made it only to VHS.

Since announcing the store closure last week, she’s stopped renting and is only selling the discs and tapes. She will probably stay open through July, perhaps into August. The closure ends a 30-year chapter in her life, when she and her husband were running an electronics repair store and bought the neighboring video business to run simultaneously. She took over the video business more than 15 years ago after the repair shop closed.

She isn’t exactly sure what she’ll do next, but she might return to playing bass in local bands like she did back before the video business became her life: “I might get a band together and go back to work that way. I’m not sure.”

“I’ll miss all of my customers and friends that I’ve made in the years that I’ve been here,” she said.

One of those customers, Rita Spiva, browsed the western section in search of something she doesn’t already own.

Her interests go beyond westerns, however. She asked Bredenberg if by chance there was a copy of 2004 comedy “White Chicks” and Barbara Streisand’s 1983 drama/musical “Yentl.”

Yes to both. “White Chicks” was on DVD, and “Yentl” was hiding among the stacks of VHS tapes.

Spiva bought them both.