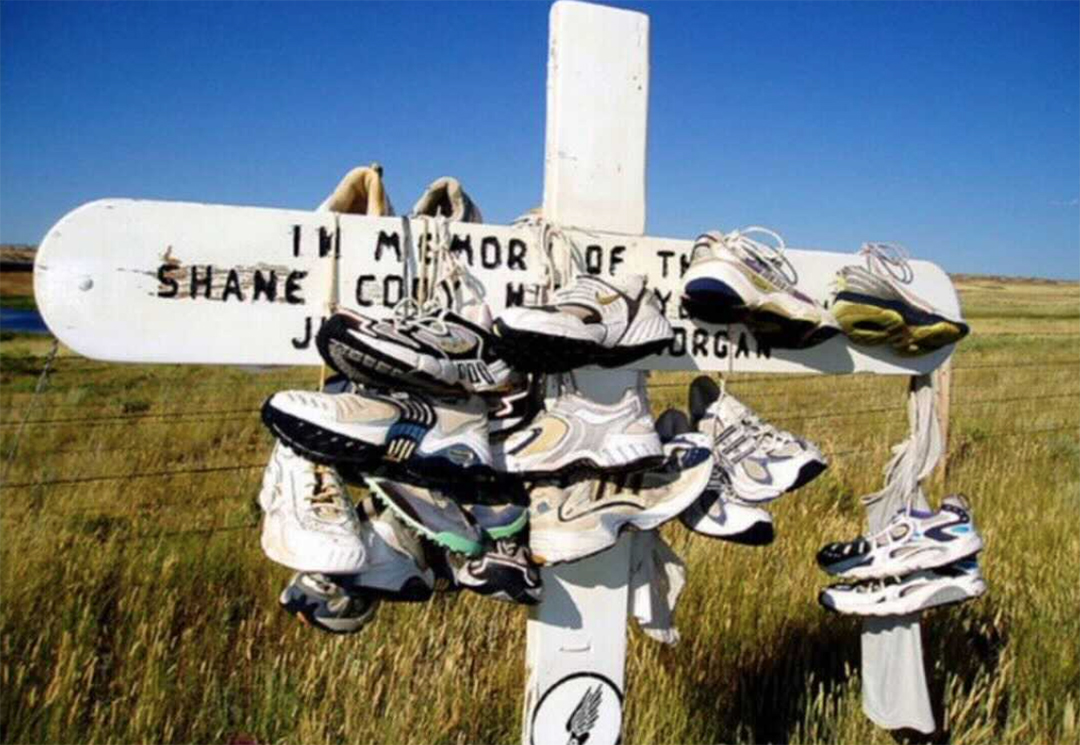 A cross covered in running shoes marks the area where eight Wyoming Cross Country team members were killed by a drunk driver while travling back from a day trip in Fort Collins. (University of Wyoming)

On Sept. 16, 2001, eight members of the University of Wyoming cross-country team were driving back from a day trip to Fort Collins, Colorado.

The friends had left Laramie after classes and activities were canceled in the wake of the 9/11 terrorist attacks just five days earlier.

Sometime after midnight, a pickup driven by fellow UW student Clinton Haskins was traveling towards Fort Collins and crossed the center line on Hwy 287, slamming head-on into the Jeep carrying the runners.

They were all killed. It was the worst single loss of life from a vehicle accident in the state’s history.

According to the Casper Star-Tribune, those killed were Justin Lambert-Belanger, 20, of Timmins, Ontario; Cody Brown, 21, of Hudson, Colorado; Kyle Johnson, 20, of Riverton; Joshua Jones, 22, of Salem, Oregon; Morgan McLeland, 21, of Gillette; Kevin Salverson, 19, of Cheyenne; Nicholas Schabron, 20, of Laramie; and Shane Shatto, 19, of Douglas.

Haskins pleaded guilty for causing the crash and served 10 years in the Wyoming State Penitentiary in Rawlins before being let out on bond. He now lives in Gillette and has spoken frequently about alcoholism and drunk driving.

The horrific incident received scant national attention as the nation reeled from the 9/11 terrorist attacks, but the loss made deep impacts throughout Wyoming, the university and among those in the running community.

Runners all around the state made 8-mile runs in honor of the victims, and on Thursday evening Governor Mark Gordon attended a remembrance in Gillette.

The annual “Memory of the 8” in Gillette takes place every September 16, and is organized by local running group Razor City Runners.

“We should never forget how important it is that we drive sober,” Gordon said, according to the Cowboy State Daily. “This was a remarkable group of young people. So we are joining with the rest of Wyoming today in remembering that awful day.”

A memorial garden was created on the UW campus in honor of the victims. On a large boulder, a plaque with photos of each victim is displayed for all to see.

Above their photos reads: “Come Run With Me.”