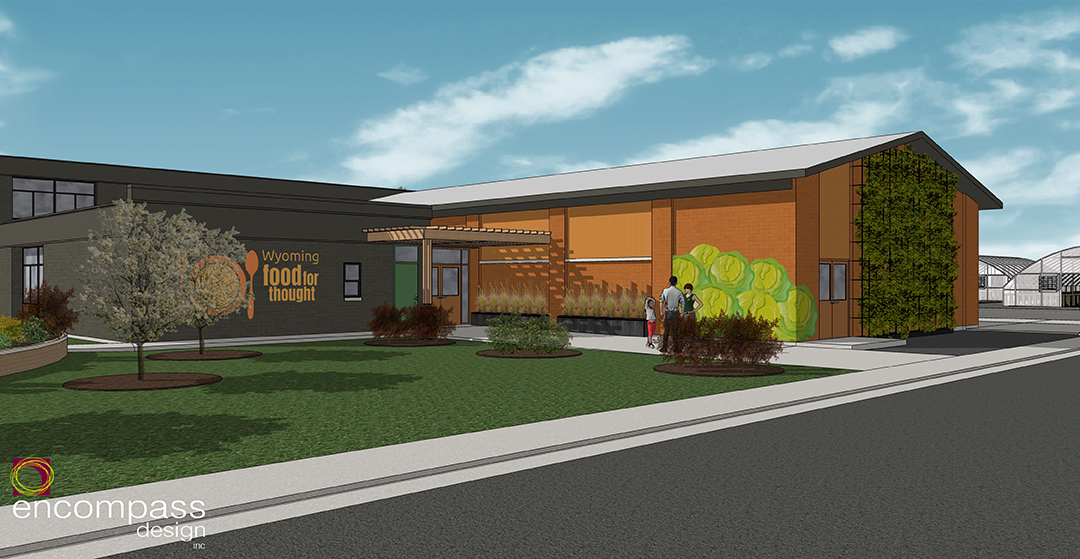 A rendering shows the design concept of the Urban Food Hub, which will transform the former North Casper Elementary School into a multi-use food and community center by Food for Thought. (Courtesy)

CASPER, Wyo. — Food for Thought is moving their home base to the old North Casper Elementary School. They announced this publicly for the first time at the Casper City Council meeting, where they applied for a 750K grant.

The building has stood in North Casper since the 1950s and was last used as a school in 2014. For many years, the school was the main place for the children of the neighborhood to attend before it became a school of choice. The elementary school that now serves North Casper is Lincoln Elementary School.

Because of the building’s long history, Food for Thought’s Executive Director Jamie Purcell says “It is important to honor the history of the building and the neighborhood. It was a school that many people went through.”

The building has changed hands since being retired as a school, and most recently it was bought by the Casper Housing Authority in 2019.

Food for Thought has now embarked to purchase the building and make it their headquarters and to consolidate their services. Their program center will relocate there and inhabit what was once the school’s front office. With significant additional space, they are also planning to house a grocery store, urban farm, community garden, commercial kitchens, hydroponics, and also offer up the remaining open space for other businesses to rent from them.

Food for Thought is a nonprofit organization that serves the community by trying to “create a local solution to hunger.” In order to better serve the community, they felt that it was “fortuitous” to have the opportunity to move into the old school.

Purcell envisions the building as the central location for food for the community of North Casper. Additionally, they will be able to serve the children neighborhood by providing programs that are easily accessible.

Purcell explains that some very big ideas have been planned for the building. The outside is going to be a greenhouse and production center. They will plant corn and other farm foods. The plan is for there to be an edible garden, where you can grow fresh fruits and vegetables. Purcell says, “Like we have done in the past, we will have garden bed rentals for people to rent.”

Food for Thought sees North Casper Elementary as a great building to move into because it is still in good condition. Purcell explains that while there will be a lot of remodeling, it is already a useable space and at that, a very large one. Purcell says that they are glad that they “did not have to spend millions of dollars to remodel. … That said, having the capital to move around from the grant that the city is going to apply for on our behalf, and the sale of the Good Food Hub, will allow us to really do things with the space.”

According to Purcell, “Beyond the kitchen, everything is ready to go. … The kitchen remodel is the linchpin to being able to officially move into the building.”

One of the interesting factors is that the school no longer had its own kitchen. According to Purcell, it had one in the 1950s, but switched to the centralized kitchen in the 1970s when the school underwent remodeling.

With the modifications, they are planning to make the kitchen rather big and accommodate two hooded prep kitchens, other prep stations down the hall, and a baking kitchen. It will be a teaching/production kitchen, and will be the home to the new Good Food Hub, which is being sold from their downtown location. Purcell says this will make it possible to house “multiple Food Hub users at the same time.”

Some other updates will include murals on the outside of the building to transform the aesthetics from “school” to a community space. They will also be making space for a food bag room, grocery store, and storefronts.

They will have a classroom upstairs that will house their hydroponics. They have grow towers that have 80 cells. They will also be growing microgreens.

The grocery store will help serve the community by being very accessible and in the middle of a residential area. With everything consolidated, Purcell says that it will be a great opportunity to bring something to the community of North Casper while serving the whole of Casper.

The nonprofit status will be maintained, with all of the endeavors allowing them to keep everything more affordable. Purcell says the goal is not to compete with other organizations, but just provide another place to buy food from local vendors while also making it affordable.

Food for Thought also plans to use the space to rent out to different businesses. They are not partial to any particular types of businesses, and Purcell says that as long as it is something that is serving the community, the doors will be open.

Food for Thought has quite the vision laid out for their new building. As Purcell says, “The opportunities are endless.”