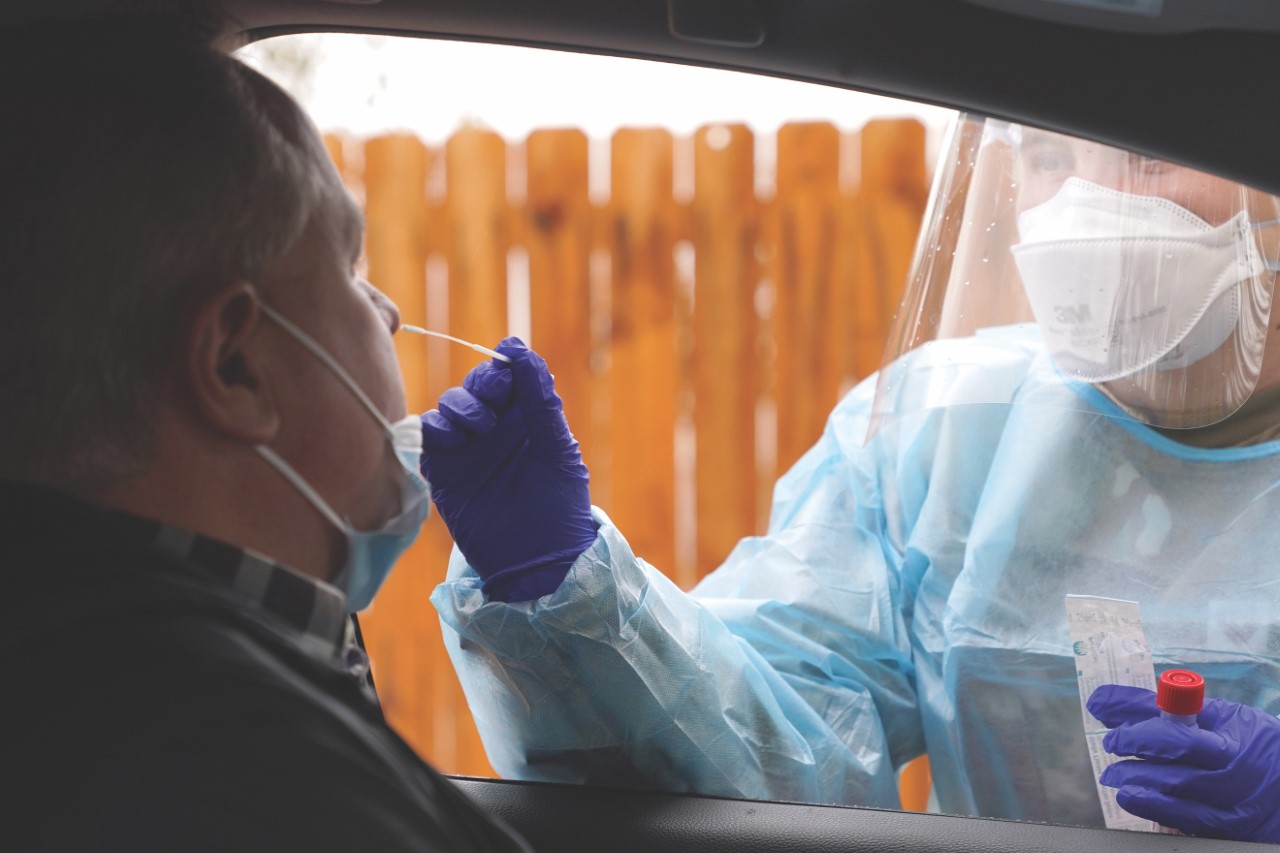 CASPER, Wyo. — It’s not every day that an untrained and nonmedical person is given the opportunity to help in a hospital. However, COVID-19 has changed health care in so many ways that it is not surprising that sending Wyoming National Guard Members into hospitals is the new norm.

At the end of September and into the beginning of October, Governor Mark Gordon deployed the state’s National Guard to hospitals to help with COVID relief and to mitigate the effects of COVID on our communities and our health care workers.

The health care workers were exhausted and overworked. The hospital in Sheridan was often at full capacity; this is why the hospital decided to petition for help. The situation looked much the same in every other community across Wyoming.

Being in the Wyoming Army National Guard comes with a lot different opportunities as well as responsibilities. It is the sword and the shield of Wyoming, and we will do whatever we are called to do. Because of this, I knew at this point that I needed to volunteer for this deployment. Within the next week, I volunteered, called my full-time staff, and talked over how we would work through my absence from my civilian jobs.

I’ve been in the National Guard for almost two years; I enlisted just before COVID happened. When most of the world shut down, the Army was still going strong. I shipped off to basic training in September 2020. I spent two months in Fort Lenard Wood, Missouri before going to Fort Huachuca, Arizona for Advanced Individual Training (AIT).

I spent a total of nine months away from everything and everyone in Wyoming. I returned to my home city of Casper, Wyoming in May 2021.

When the first email went out for volunteers, I declined. I did not want to leave my job as a writer at Oil City News and a teacher at a local dance studio in Casper. However, two weeks later, I got another email saying that they still needed more soldiers.

The decision to volunteer was even harder because it was no longer just a call to serve in your own community; it was now in different cities around the state. Casper had already filled up, so they would be sending me to a smaller community. It was hard to leave everything behind, especially when it felt like I had just been able to come home.

I had only been to one drill with my unit before volunteering for the deployment. My unit told me I would be going to Evanston, Wyoming. It was so far away from Casper, not to mention across treacherous roads, but I was willing to do it. I had originally volunteered to go for only four weeks.

The day before I left, I got a phone call from the JOC (Joint Operation Center) located in Cheyenne. They informed me that I was now needed in Sheridan, Wyoming and that I would be the only soldier there. They said that I would be appointed as the NCOIC (Non-Commissioned Officer In Charge) — terrifying and exciting news all at once. I am a PFC (Private First Class), so this meant that I would be assuming the role of a station two ranks higher than mine.

One thing that you have to recognize in the army is that when you are told to do something, you do it without question. No matter your rank, gender or age, you are a soldier. I assumed the role with the upmost importance.

The morning of Monday, October 18, I drove to Sheridan and was able to get everything settled and meet the staff. My first official day was on Tuesday, where I had to learn everything.

I had no medical experience, but this did not bother the Sheridan Memorial Hospital. They put me to work at the Urgent Care there, one of the only places where you can get COVID tested.

There were a lot of stations to learn, and the first day I was there was all about learning the process for getting people checked in.

Later that day, I got the call that I would be getting more soldiers and that I was still going to be NCOIC even though they would be a higher rank than me.

With another PFC there, I started learning how to actually test people for COVID. The process was scary the first time I did it. Without medical experience, I felt like had no idea what I was doing. The nurse there helped walk me through everything.

The first essential task was knowing how a nasal pharyngeal test worked. This is the long swab that everyone says feels like they are swabbing your brain. In reality, it’s not going up: it actually goes down the nasal passage toward the throat.

There is another type of swab that we used for antigen tests. This is just a big cotton ball swab and it only goes on the edges of your nose and does not hurt.

Before you can test people for COVID, you have to don the proper personal protective equipment (PPE). This means a medical gown, an N-95 mask, a face shield and two pairs of gloves. This was all to go over our operational camouflaged pattern (OCPs) that we were already wearing daily.

The nurse that trained me had me perform the test on herself first, and afterward she okayed me for testing others.

After I had that down, it was time to remember the entire speech that you have to say to each person getting tested — a long explanation of the types of tests we offered, the time frame to get the results back and the payment options. In Sheridan, there were three options for tests: the state test, rapid test and antigen.

I shadowed the other nurses until I could memorize the speech for myself, and by the next day I was administering COVID tests by myself.

One of the things that had been the most astonishing to find out was how the tests were run. With a rapid PRC test, you could get results within 20 minutes.

The clinic was set up as curbside testing center, so that meant the swabber would stand outside and test whoever needed a COVID test from their vehicle – no matter the sun, rain, or snow. When I began my deployment in October, we were testing upwards of 70 people a day. By the end of the assignment, that number had dropped significantly to only 30 people a day. However, no matter the number of patients, it meant donning all of the PPE, repeating the same speech, and performing multiple swabs.

The next week, a specialist and a sergeant arrived at the location. I was still the NCOIC and we had to figure out the most effective ways of using everyone. I remained in the position of testing people and the the other soldiers took up roles checking people in, running the tests, and sending results to the patients.

Within the next week, two of the soldiers left to go home, meaning that we were understaffed again with only Specialist Masters and myself there. The ebb and flow of people in and out of the testing center was astonishing because it was essentially what the hospital had been experiencing regarding staffing over the course of the entire pandemic.

It was at this point that the call to stay for a longer amount of time was needed. The Guard extended my orders to December 13.

Working Monday through Saturday, the National Guard oversaw almost the entire process of the testing center, allowing the nurses to perform their regular job in Urgent Care.

The deployment was completely voluntary, so every National Guard member had the choice to get put on this assignment and upwards of 100 guard members both from the Air Guard side and the Army Guard side answered the call. Some people were able to serve in their own communities while some were sent to other places around the state; some stayed on for as few as two weeks while others are remaining on the assignment until December 31.

Throughout my time in Sheridan, it was shocking to see how bad COVID was, even in such a small community. All of the nurses had also experienced COVID, either at the beginning of the pandemic or within the last couple of months. Everyone was so thankful to have help from the National Guard.

Because of this, I felt like I was truly able to help. I was lucky enough to not experience COVID while I was there, but I did see firsthand the effects of it. In a small community, it seemed like it hit them a lot harder. Almost everyone I met — whether a nurse or not — had experienced COVID.

Being exposed every day was scary at first, but this quickly became the normal routine. I saw so many people that were really sick, sometimes I would test entire families who had exposed each other to COVID.

If we had a patient come in that was having a hard time breathing, we would immediately make sure they got into Urgent Care or were admitted into the hospital.

One of the most rewarding things was when patients would call and say that I was doing a great job testing them. If I was out in the community later, some people even recognized me and thanked me for what I did. Whenever testing people, they would often see the the uniform under the surgical gown and even then thank me for my service.

The Guard put me up in a hotel room for the entire two months and the only time I came home during my service was for the day of Thanksgiving. This was not a bad setup, but there was no way to cook during the time. However, the nurses showed me such kindness that they let me borrow things to cook with.

While it’s hard to be away from your family and friends, it’s important to do things that you enjoy. I made sure to work out and really tried to become a part of the culture in Sheridan. I did not want to be stuck in my hotel room in my time off.

While I was there, everyone treated me with such kindness that it felt as though I had really become a part of the family in Urgent Care. I made friends with the nurses as well as the other soldiers.

I learned a lot about COVID, the Guard, and leadership. It was an experience like no other and allowed me the opportunity to be pushed out of my comfort zone and become a better soldier and person.

I could never thank the hospital and people there enough for the kindness that they extended.

The service of a member of the National Guard might not always be straightforward, but it is undoubtedly an opportunity for you to help and feel like you are making a difference in your home state.

The opinions in this article are that of the author and do not reflect the Wyoming National Guard as a whole.