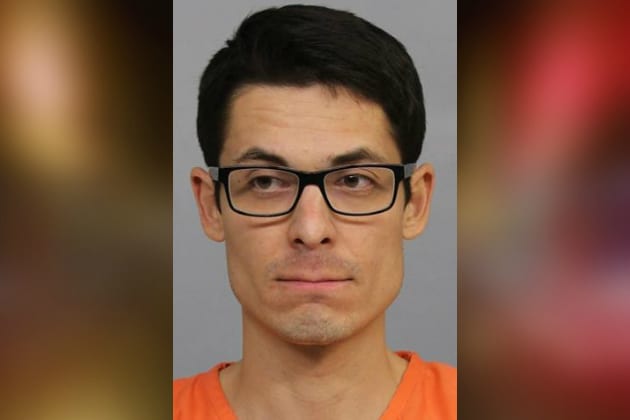 Kellan Holbrook, a NCSD educator was charged with possession of "liquid meth" in December of last year.

CASPER, Wyo. — A Natrona County School District virtual educator was arrested on the evening of Dec. 9, 2021 for alleged possession of a combined total of 0.71 grams of liquid meth contained in four separate syringes.

Three of the syringes were allegedly found in Kellan Wayne Holbrook’s vehicle after officers responded to a report of domestic violence; the other was located in the residence the officers initially responded to, according to charging documents.

Officers initially responded to a report of a “family fight” at approximately 8:15 p.m. The reporting party stated they could hear a male and female screaming at each other and a loud bang. The reporting party advised officers that the argument sounded physical, according to charging documents.

Officers arrived at the scene and were allowed to come inside by the owner of the residence, who advised the officers that Holbrook was most likely hiding in the basement or in the garage.

“Officers observed the front and back doors of the residence appeared to have been kicked in as the trim and latch portion of the jambs were damaged. Officers observed couches had been pushed in front of the front door, blocking it from opening. Officers located Holbrook hiding under a bed in a room in the basement,” the charging documents state.

The officers then separated the parties and conducted separate interviews. During the course of the investigation, a syringe was allegedly located in the bathroom of the residence that both parties claimed belonged to the other.

“Officers decided to have the parties separate for the night. … Officers [then] advised the suspected methamphetamine found in the bathroom would be logged for destruction,” court documents stated. “As Holbrook was preparing to leave, officers expressed their concerns about the reports of methamphetamine and the syringe in the house. Officers asked Holbrook for consent to search his vehicle for anything illegal before he left. Holbrook consented to the officer searching the vehicle.”

Upon searching the vehicle, three additional syringes were allegedly found in the center console of the vehicle. Holbrook was then placed under arrest.

“NCSD is aware of the misdemeanor charge filed in relation to Kellan Holbrook, an NCSD Virtual Program educator. The employee is on administrative leave, effective 12-10-21,” Director of Public Relation for Natrona County School District (NCSD) Tonya Sutherland said in a statement to Oil City News.

According to NCSD policy, “Each person who is to be recommended for employment in a classified position will be required to complete a form listing all felonies and non-traffic violation misdemeanors for which s/he has been convicted and then sign a notarized affidavit stating that the information is true and correct. If the results of the criminal background checks are different than the information on the notarized form, then an immediate recommendation for termination of the employee’s contract may be submitted to the Board of Trustees (if the Board has already acted to employ the person).”

“Any person who is recommended for employment in a classified position who was issued a teaching certificate or a substitute permit by the Wyoming Professional Teaching Standards Board after July 1, 1996, will not be required to undergo the background check since s/he went through the process in obtaining the certificate or permit.”

Holbrook previously pled guilty to a misdemeanor count of domestic battery in July 2019.