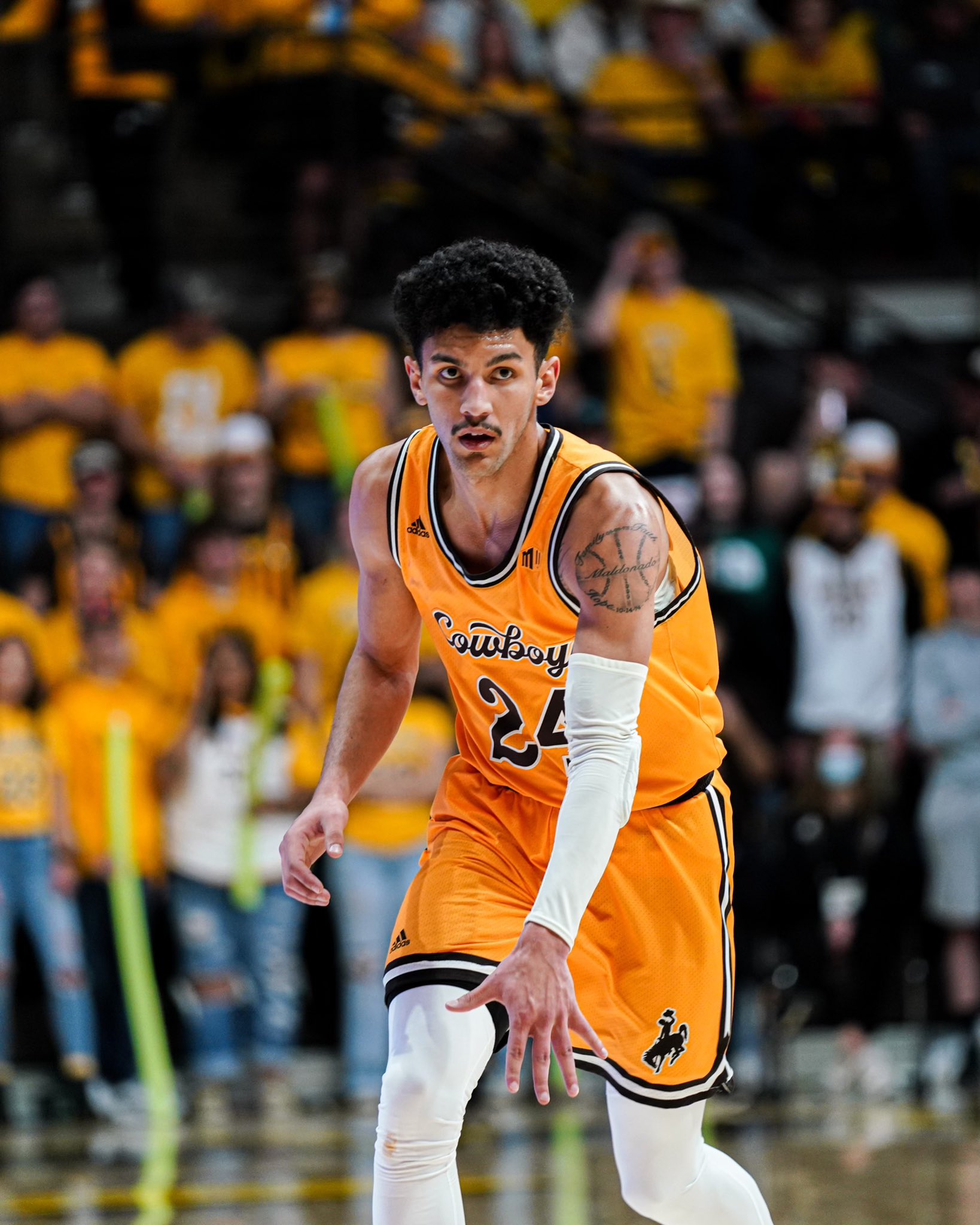 LARAMIE, Wyo. — When Wyoming men’s basketball coach Jeff Linder stepped into the role before the 2020-21 season, the program had gone through a couple of rough years.

The Pokes went a combined 17–48 in the prior two seasons before Linder’s arrival, a brutal stretch that often saw the Cowboys trounced home and away. A guard by the name of Hunter Maldonado was there during those years, showing flashes of potential as he battled through injuries and many, many defeats.

But the run the Pokes are on at the moment with Linder at the helm — holding a 15–2 record following a tight 93–91 win over New Mexico on Saturday — has the rest of the Mountain West Conference turning heads. And without figures like Maldonado in the fray, it likely wouldn’t be the same right now.

Wyoming has now won six straight games dating back to December 23, including a 4–0 record in the past eight days following a COVID-related pause in the program, with its victory over the Lobos (7–12) at Arena-Auditorium arguably the most gritty.

“It’s big, especially with these tough games,” Cowboys center Graham Ike said about his team’s past eight days, which included wins at Utah State and Nevada, then at home against San Jose State and New Mexico. “We don’t get flustered, we don’t get worried. We understand that we have to stay together and keep pushing through together because we’re not going to win this game one-on-five.”

Although Ike’s quote is true, some big moments from singular players proved massive for the Pokes on Saturday.

First was Ike’s own performance as the 6-foot-9 tower — following when he missed Wednesday’s game against San Jose State as a precaution following a minor knee injury — returned to action against the Lobos with a monster 29-point, 15-rebound double-double.

Per college basketball analytics site KenPom, Ike is fouled more often than any player in America at a rate of 8.5 fouls drawn per 40 minutes. But that doesn’t mean Ike is a black hole inside that shoots it every time he touches it; his underrated passing was on display throughout the game, kicking out to the perimeter when needed (particularly after New Mexico double teams) and being a big part in the Pokes’ knocking down eight 3-pointers, seven of which came in the first half.

“That’s why I recruited him so hard,” Linder said about Ike’s awareness inside. “The one thing that [I’ve achieved] hopefully during the course of my college career is that I’ve had the ability to find guys that have really good feel for the game. And it’s something that we look for and we try to identify.”

Then there was the night Maldonado had as the veteran scored 25 points, though his biggest play wasn’t even on offense.

UW guard Drake Jeffries — who himself had a nice game with 14 points — threw an errant pass with 19 seconds left and the Cowboys up two that resulted in New Mexico getting the ball back with a chance to tie or win. But when Lobos stud Jamal Mashburn Jr. (who finished with 22 points) drove toward the rim looking for a tying bucket, Maldonado cut him off and drew a charge with 12.5 seconds remaining to send Arena-Auditorium in hysterics.

Not only did it get the Pokes the ball back, but it also sent New Mexico coach Richard Pitino into a rage that drew him a technical foul and sent Jeffries to the free throw line. The senior from Mattoon, Illinois knocked down three foul shots in the final 10 seconds to seal the game once and for all, but without Maldonado’s heady play, it wouldn’t have happened in the first place.

“I was still trying to probably figure out what went on with Drake and [Brandon] Wenzel and Maldo throwing the ball back around like a hot potato and giving it to the other team,” Linder said of Maldonado’s charge. “But that’s what Maldo does. We talk about it all the time, you’ve got to make winning plays. And for him to beat him to the spot like he did, that’s what a guy like Maldo does. It’s why you win games. That’s why we’re 15–2, is that you find ways to do that.”

That 15–2 record is Wyoming’s best start to a season since 2014-15, when current NBAer Larry Nance Jr. helped take the Pokes to their last NCAA Tournament to date.

Does that mean Pokes fans should start crafting travel plans for March Madness? Not quite yet. While certainly impressive, UW hasn’t played a single top-five team (besides itself) in the Mountain West yet. Its first opportunity to do so is the next game — at 7 p.m. Tuesday at Boise State — and the Pokes need their personnel on top form again to leave Idaho with another win.

But there’s a lot to like about Wyoming right now. Whether those good vibes continue is up for the team to decide.

“The guys stuck together,” Linder said. “It’s one of those deals where you don’t apologize for winning — and we’re going to enjoy this one — but there’s some things that we’re going to have to take from it and learn from it.”