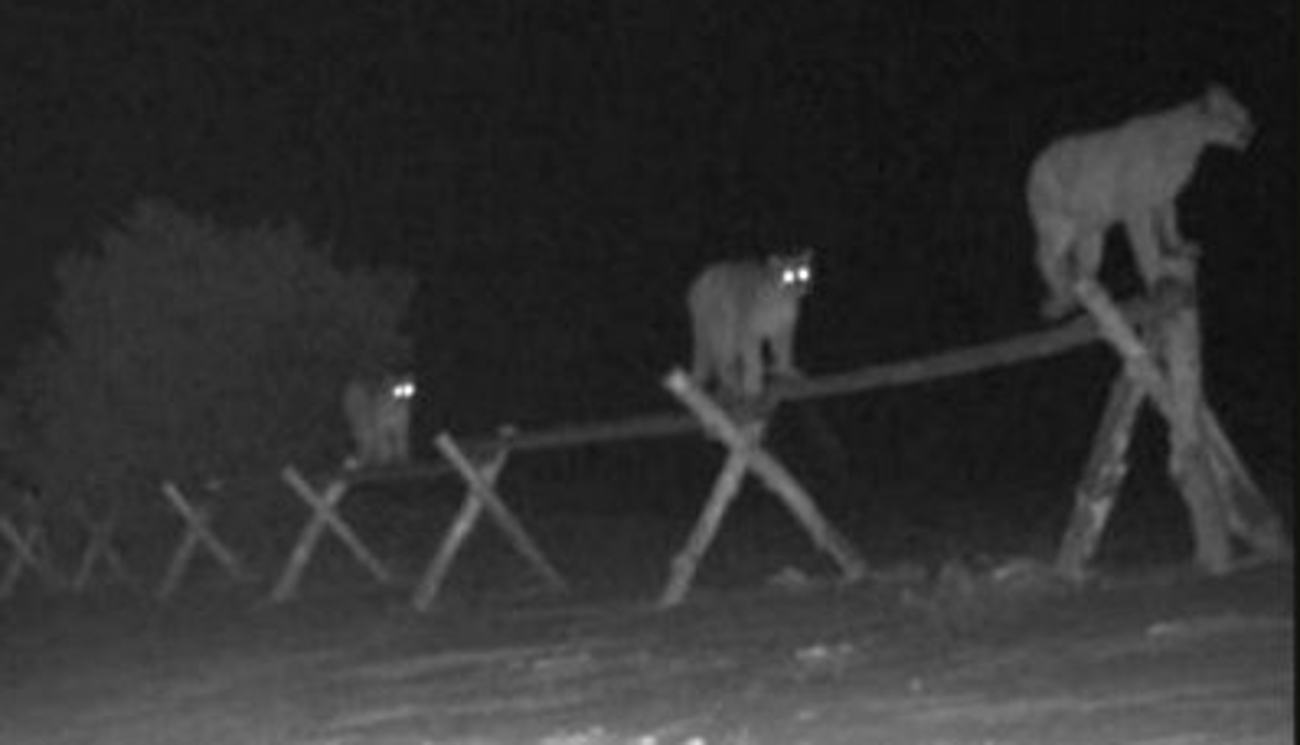 CASPER, Wyo. — Is there an increase in the number of mountain lions in the Casper area or are the animals being spotted more frequently due to more and more residents adding trail cameras and home camera security systems?

Both more cats and more cameras may be contributing to more frequent sightings of mountain lions in the area, according to Wyoming Game and Fish Casper Region Wildlife Management Coordinator Justin Binfet.

“That’s a female with three old kittens,” Binfet said, adding that the kittens appear to be approaching adult-size and look healthy. “They’ve obviously been doing well. … She’s been a successful mother.”

Binfet added that it is common for mountain lions to have litters of 2-4 kittens that will stay with their mother until they are around one and a half years old. While it is more common for mothers to give birth in spring, mountain lions can have litters throughout the year. If any of the kittens are male, they will continue to grow until around 3-5 years old. (Further educational information about mountain lions is available from the Wyoming Game and Fish Department online.)

While there is not definitive evidence of an increase in mountain lion population numbers in the Casper area, Binfet said he is working with a houndsman on an ongoing study of the species in the area, and a lot of mountain lions have been collared south of Casper.

“We do think lion numbers are up,” he said, cautioning that Game and Fish does not have the resources to definitively estimate the population in the area.

Julie York is a lifelong resident of Casper Mountain. She said Tuesday that there is a feeling among mountain residents that there has been an increase in mountain lion sightings over the past 4-5 years. She said that more people having cameras may be contributing to greater awareness of mountain lion presence in the area.

“Game cameras are very common,” she said. “Almost everybody has them for security for their land.”

The images shared to the Casper Mountain Landowners Association group were not captured on York’s own land; she shared those images with permission from other landowners who want to remain anonymous to avoid attracting people to their property.

While she has always known there were mountain lions on Casper Mountain, York said that seeing them more frequently captured on camera has made her more cautious about taking walks.

“I’ve lived up here my entire life,” she said. “I didn’t used to be afraid to walk anywhere.”

However, knowing that mountain lions have recently been in the area as evidenced by images captured on game cameras generates a different feeling for York and she doesn’t feel as comfortable walking around knowing they are there.

“The mountain lions do scare me more than the bears or anything,” she said.

Another factor that may be contributing to more frequent mountain lion sightings in the Casper area is more people. Binfet said that the area has always been mountain lion habitat, but that “we have way more humans sprawling out.”

People’s behavior may also be attracting more mountain lions to the area — specifically people feeding animals like deer and wild turkeys. Binfet emphasized that Game and Fish strongly discourages people from feeding wildlife as this can cause a “whole host of problems,” including attracting predators into areas inhabited by humans.

Earlier this winter, there was a mountain lion frequently reported in the Garden Creek area that Binfet said is thought to have been feeding on turkeys. When there have been mountain lion sightings close to or even in town (cats have been spotted walking along trails along the North Platte River in Casper), Binfet said Game and Fish takes those sightings seriously.

While it is not uncommon for mountain lions, particularly younger lions in search of their own territory, to travel along natural corridors through the area, Game and Fish takes action if a mountain lion is found to be repeatedly hanging around in a specific area — especially if the lion is not showing a natural fear of humans.

In terms of safety, Binfet said that people should keep pets inside at night. He added that while mountain lion attacks on humans are rare, they can still happen and that people should be aware that they have the right to defend themselves and pets.

If you encounter a lion, remember the goals are to convince it that you are not prey and that you may be dangerous. Follow these safety tips:

Do not approach a lion. Most mountain lions will try to avoid a confrontation. Give them a way to escape.

Do not run from a lion. Running may stimulate a mountain lion’s instinct to chase. Instead, stand and face the animal. Make eye contact. If you have small children with you, pick them up if possible so that they don’t panic and run. Although it may be awkward, pick them up without bending over or turning away from the mountain lion.

Do not crouch down or bend over. A human standing up is just not the right shape for a lion’s prey. Conversely, a person squatting or bending over resembles a four-legged prey animal. In mountain lion country, avoid squatting, crouching or bending over, even when picking up children.

Do all you can to appear larger. Raise your arms. Open your jacket if you are wearing one. Again, pick up small children. Throw stones, branches, or whatever you can reach without crouching or turning your back. Wave your arms slowly and speak firmly in a loud voice. The idea is to convince the mountain lion that you are not prey and that you may be a danger to it.

Fight back if attacked. A hiker in southern California used a rock to fend off a mountain lion that was attacking his son. Others have fought back successfully with sticks, caps, jackets, garden tools and their bare hands. Since a mountain lion usually tries to bite the head or neck, try to remain standing and face the attacking animal.