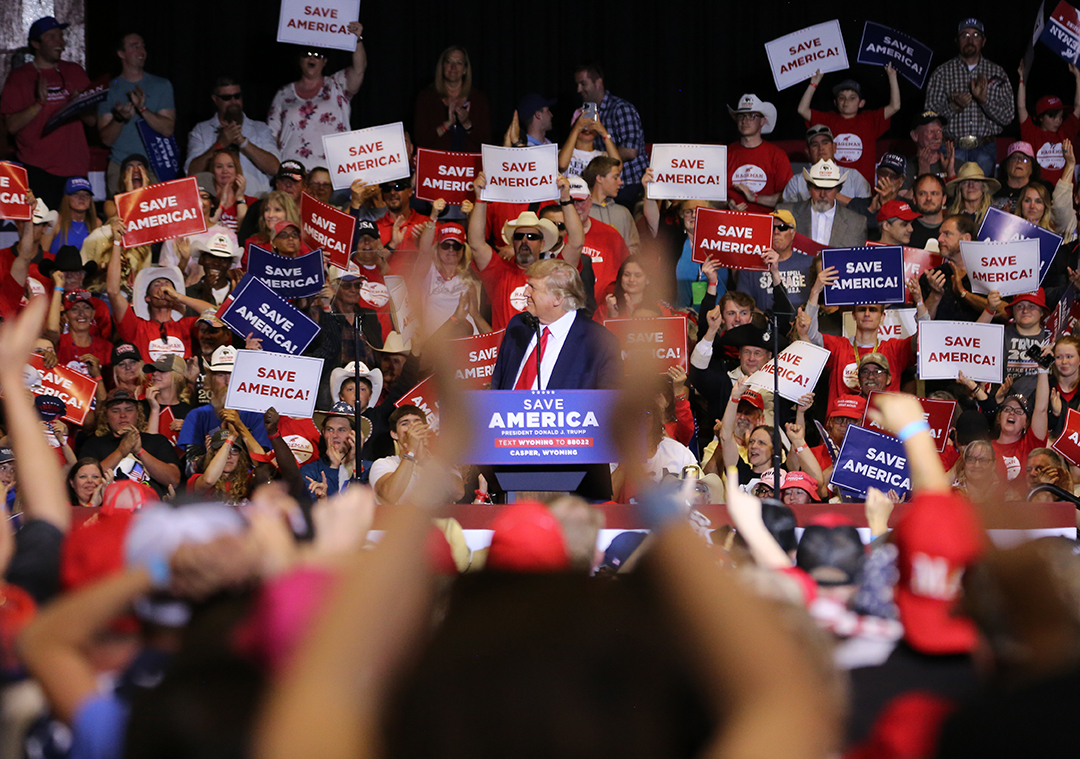 Former president Donald Trump pauses for applause during a speech at the “Save America” rally on Saturday, May 28, at the Ford Wyoming Center in Casper. (Dan Cepeda, Oil City News)

Trump appeared in support of Cheyenne trial attorney Harriet Hageman, who is running to unseat Liz Cheney for Wyoming’s lone seat in the U.S. House of Representatives. The backlash against Cheney for her vote to impeach Trump in the wake of the U.S. Capitol riot has only increased due to her leadership position on the January 6 committee investigating Trump’s role in inciting the mob to disrupt the certification of Biden’s victory.

Trump referred to the investigation apartisan “hoax,” and the ongoing prosecutions of rioters in federal courts as an “assault on civil liberties.”

Trump and other speakers identified the race for Wyoming’s seat as a flashpoint in the Republicans’ hope to win back control of the House, and Trump cited a litany of critiques of the Biden Administration, the pro-choice policies, and cancel culture.

The 2022 midterms “may be the most important election in the history of this country,” Trump said. “We’re going put numbers up that nobody’s ever seen, we want to win so big… it will be a thunderous victory, the likes of which we have never seen. It will be the most important [election victory] in the history of our country, and Harriet Hageman is going to be leading in that election.”

Trump praised Hageman’s command of the podium, some of the state’s GOP leadership, and the host state that voted 70% for him in the 2020 election.

“This state was built by some of the toughest men and some of the strongest women to ever walk the face of the earth,” Trump said.  “Wyoming was forged by pioneers, and farmers, mountaineers, frontiersman, ranchers, and lawmen and by a roll call of America’s legends like Buffalo Bill Cody.”

Trump also acknowledged Roice McCollum, sister of Lance Cpl. Rylee McCollum, the Bondurant native who died with 12 other service members in a suicide blast in Afghanistan during the U.S. withdraw from the country last summer.

“We didn’t lose one soldier in 18 months until this catastrophic surrender took place,” Trump said, adding that America had forfeited strategic positions in the country after it fell to the Taliban days after the U.S. withdrew.

Trump relayed some of his exchange with Governor Mark Gordon, saying he’d like to see Gordon pass cross-over voting legislation to prevent Democrats from changing party affiliations to vote in Republican primaries.

Trump continued casting doubt on the legitimacy of the 2020 election, saying first it was “seriously flawed,” and later that it was “rigged” and “stolen.”

Mike Lindell, the CEO of MyPillow, claimed Dominion voting machines had cost Trump votes in the 2020 election in every state, including 22,000 in Wyoming.  Lindell got one of the biggest cheers when Trump acknowledged his contribution to the rally in his remarks.

An Associated Press investigation into claims  disputing results in six states found fewer than 475 potential instances out of more than 25 million votes cast.

Trump also also he thought voting should be a one-day affair.

Trump also called out the Biden Administration’s initial moratorium on the sale of federal extraction leases, which continued until March of this year. The Petroleum Association of Wyoming said in February that the policy had cost the state about $47 million in revenue since January 2021.

Cheney still enjoys the endorsement of the Petroleum Institute of Wyoming, and has sponsored legislation seeking direct payment to states for lost mineral revenues and prohibiting the administration from blocking lease sales. Congressional trackers say Cheney also voted with Trump about 92% of the time.

Trump said that a reporter had recently asked him to define “Trump-ism,” a term synonymous with the America First platform.

“It’s really very simple,” Trump said. “It means low taxes, low regulations, the most powerful military in the world… It means tariffs and taxes on other countries that take advantage of the United States, which is almost every one of them.”

Doug Brickman, a rancher from Wheatland, who spoke to Oil City outside the venue about his concerns as a conservative, said “my energy right now is to preserve freedom for my grandkids.”

The economy, inflation, and the Second Amendment were also top of mind. His disapproval of Cheney goes beyond her participation in the Jan. 6 panel; Brickman said that Cheney has not participated in meetings and conventions she’s been invited to in the state.

Brickman came with two friends including a man who claimed to own the best steakhouse in the state, the Miners and Stockman’s Steakhouse and Spirit in Hartville. Owner Scott Harmon said Governor Gordon had lost his support when he was forced to shut down the steakhouse during the COVID-19 pandemic. Harmon said the steakhouse has survived by pivoting to groceries.

Response to the rally from supporters was enthusiastic.

“He hasn’t lost his stride,” Mike Pyatt, organizer of Liberty’s Place 4 U in Casper. “His intuition has always been one of his strengths.”

When Trump mused about a 2024 presidential run, the venue raised a sustained cheer.

In his remarks, Eathorne said of Trump: “I would run through barbed wire for that guy, how about you?”