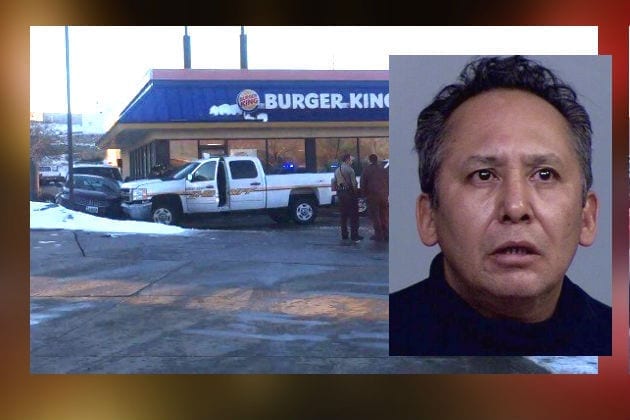 A Casper man was arrested after Natrona County Sheriff’s Department Officials say that he intentionally rammed an NCSO vehicle in a Burger King Drive-Through. This represents the fourth arrest for David Stephen Briones III in the month of February.

Briones was booked on two charges of Aggravated Assault, two charges of Assault on a Peace Officer, and two counts of Felony Property Damage. Because of the Sheriff’s Department involvement in the situation, Casper police are investigating the incident.

Related Story: Video from the Scene near Poplar Street and English Ave.

Police paperwork says that the NCSO originally received a call on Wednesday (2/8/17) for a male in a vehicle exhibiting unusual behavior in the parking lot of the Natrona County Detention Center, on Bruce Lane in Casper. The driver was observed driving in circles in the parking lot of the detention facility. Sheriff’s Deputies were able to identify the driver as Briones, who had previously been called in twice the same day as an “Attempt to Locate” and a “Gas Drive-Off.”

Deputies say that Briones fled during the interaction. Deputies calling off the pursuit due to safety concerns at the time.

Briones was then observed pulling into the Burger King drive-through window, nearby. Deputies positioned themselves in-front-of and behind Briones’ vehicle, boxing the suspect into the drive-through lane. Casper police affidavit says thats when Deputies activated their emergency flashers, the suspect “aggressively accelerated,” ramming an NCSO truck.

Police say that due to the position and damage to Briones’ vehicle, he was forcibly extracted from the driver’s seat of the vehicle and taken into custody.

According to an arrest affidavit; during questioning Briones stated that he had smoked Methamphetamine two days previous to the event, that he was on various medications, and that he had a gift which allowed him to, according to police paperwork, “communicate with others without them being present.”

Investigators describe Briones as “having delusions, often speaking to individuals not in the room.”

Briones is described as saying that he was communication with voices throughout much of the day. He went on to say said that he got gas, advising the clerk that he owned the Police Department and wanted the fuel bill sent to them. After getting fuel, investigators say that Briones left and went to the detention center to receive money that Briones claims had been promised to him by former United States President Barack Obama.

The Suspect is also said to have claimed that Sheriff’s Deputies fired upon him when he was at the detention center and he attempted to get away, stopping at the Burger King because he was hungry. Briones is then said to have claimed to accelerate causing the crash, after Deputies activated their emergency flashers.

Briones will face formal charges during his initial appearance in court. Charges are subject to change, and all suspects are assumed innocent unless proven guilty in a court of law.

Briones was previously arrested three times over the course of February 2017, and booked into jail on charges including Breach of Peace, Disturbance, and Loitering.