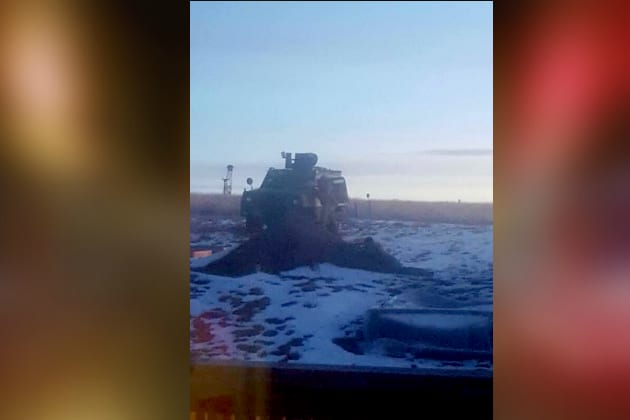 A Special Response Team vehicle parked out back of a private residence in Bar Nunn.

Details have been released about a Bar Nunn home invasion, that required deployment of the Natrona County Special Response team, late Wednesday night and into Thursday (2/9/17) morning.

William M Quillin and Sharon M Hinkle have been identified as the suspects in case. Both Hinkle and Quillin were arrested and each has been booked on charges of aggravated assault and robbery.

According to Natrona County Sheriff’s Sergeant Aaron Shatto, one or both of the suspects are believed to have kicked down the door of a private residence on the 4800 block of Bel Vista Drive in Bar Nunn, forced entry, and demanded to be taken to a safe. The two older individuals who were in the home at the time explained that there was no safe in the residence.

Both individuals are believed to have then been assaulted. One of the victims was able to leave the residence and flee to the property of a neighbor, but was allegedly chased by Quillin who was said to be wielding a snow shovel, continuing to assault the victim. The commotion roused the attention of the neighbor who came outside, causing Quillin to leave.

Law Enforcement received multiple 911 calls alerting them to the situation. Shortly after 9 am the Special Response Team apprehended Quillin and Hinkle.

The suspects are currently scheduled to make their initial appearance in court Friday afternoon, where they will hear the official charges against them and where they will have bond set in the case.

Charges are subject to change. Suspects facing charges are assumed to be innocent until otherwise proven in a court of law.