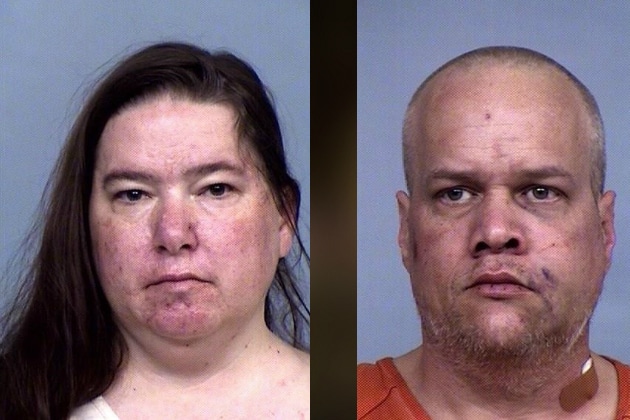 An assistant D.A. in Circuit Court Friday afternoon called it a “nine-hour stand off,” when describing the home invasion, alleged assault of two residents, and subsequent events following.

William Mason Quillin appeared in Natrona Count Circuit court Friday (2/10/17,) for his initial appearance, dressed in orange jail clothing and shackled hand and foot. There were at least five Sheriffs deputies on hand during the proceedings. During Quillin’s appearance, he was the only in-custody suspect in the court room.

Quillin was officially charged with two charges of Aggravated Assault and one charge of Aggravated Robbery. Quillin declined to speak toward his bond, Judge Brian Christensen handing down a bond amount of $1.5 million.

Following the initial appearance, Quillin was escorted from the courtroom. A short time later other suspects were brought in from Natrona County Detention Center, including Sharon Marie Hinkle.

Sheriff’s Deputies received a call on February 8th at approximately 10:24 pm of a prowler near the 4800 block of Bel Vista Drive in Bar Nunn. Sheriff’s deputies, Sheriff’s investigators and Wyoming Highway Patrol responded to the scene.

Investigators believe that Quillian kicked open the door and began demanding access to a safe, which did not exist inside the home. It is believed that both Hinkle and Quillan entered the home, although it is alleged that Hinkle stayed inside the front doorway, and slowly backed onto the porch during the incident.

Arrest affidavits say that Quillin remained inside the residence and continued to yell about the nonexistent safe. It is then alleged that Quillian pushed one of the two victims and battered her. In the meantime another victim managed to escape, running for help at a neighbor’s home.

Victims also allege that at the time, Hinkle was said to be standing on the front driveway holding what was described as a “club.”

When finally confronted by the neighbor, Quillin and Hinkle walked away, witnesses claiming that Quillin said “I’m going to kill this bitch.”

Law Enforcement set up a perimeter around the Quillin’s home where the suspects were believed to have holed-up.

The decision was made to dispatch the Natrona County Sheriff’s Office Special Response Team, or SRT. The SRT served a signed search warrant on the Suspect’s home.

Both suspects were booked into jail just after 3:00 pm on February 9th.

The suspects will face their preliminary hearing at a later date, to determine if their cases will be bound over to Natrona County District Court.