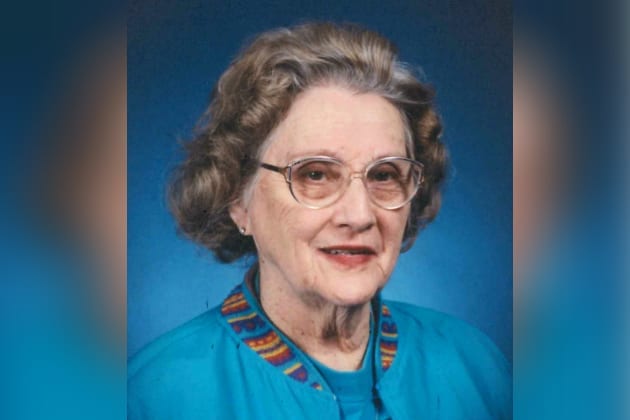 Funeral services for Casper resident, educator, and philanthropist, Barbara Nell (Raymond) Scifers, will be conducted at 2 p.m. Friday, March 17, on what would have been her 98th birthday, at Shepherd of the Hills Presbyterian Church by the Reverend Lynn Williamson. Interment will be in the Masonic area of Highland Cemetery, next to her husband, Leland Floyd Scifers.

Born March 17, 1919, on the homestead of her maternal grandparents, she was the daughter of Charles Clifford and Edna Roselle (Smith) Raymond. “I lived in the country during my elementary school years, and our main recreation was dancing on Saturday night in the one-room country schoolhouse,” Barbara recalled of her early days. During this time, she played the guitar and sang solos, winning a competition for the county. She graduated in 1937 from high school in Malta, Montana, where she “was in all the musical activities, plays, and went dancing someplace nearly every Saturday night.”

Barbara met Leland when she was maid of honor at his sister’s wedding in Montana. Leland, who grew up 50 miles from Barbara, was working in Casper as an accountant for Texaco Refinery and came home for the wedding. On August 28, 1949, after a three-month courtship, she married Leland in Malta and moved to Casper from Oregon. The couple celebrated their 50th wedding anniversary in 1999.

Barbara’s time with Casper College was even longer as she was the choreographer for the musical “Rio Rita” during the 1949-50 school year. During the fall of 1950, she taught dance to a group of eighth-graders through the college, and from that point, taught dance continually as an adjunct at the college until the fall of 2000, a total of 51 years. Leland joined her as an adjunct dance instructor in 1953.

Barbara and Leland opened the Arthur Murray Dance Studio in 1953 changing the name to the Barbara-Lee School of Dance in 1955. During their many years, they taught dance nights and weekends in their studio, at the Elks Club, Casper Country Club, Church of Jesus Christ of Latter-day Saints, Shrine Club, Casper Petroleum Club, and for other small groups.

In 1994, the couple purchased the Barbara-Lee Mobile Home Park, which they later gave to the Casper College Foundation as part of the $1 million the couple donated to build a dance studio at the college. When explaining their donation, Barbara said, “Dancing has continually been an important part of our lives, so has Casper College. It is an outstanding school, and we are happy to give our gift to help the school and community. We have had thousands of students in our classes at our studio and college as well as other places we’ve taught. Casper is our home!”

Other areas that Barbara donated to include the Casper Senior Center expansion, the Fort Caspar Museum expansion, the Central Wyoming Hospice and Transitions expansion, the Nicolaysen Art Museum, the Wyoming Veterans Memorial Museum, the Girl Scouts of Montana and Wyoming, and the National Historic Trails Center to name a few.

She was a member of Beta Chapter – Delta Kappa Gamma; a 50-year member of the Business and Professional Women’s Club; director of the Tamah Temple Egyptian Dancers; member of Kheta Court #59, Ladies of the Oriental Shrine; Zilah Club, Daughters of the Nile; and served on the boards of the Red Cross, Community Recreation, Community Concert Board, Casper Women’s Clubhouse Management, and others.

Barbara received the Business and Professional Women’s Outstanding Business Woman Award. In 2006, the Council for Resource Development named Barbara the Region VIII Benefactor of the Year for her contributions to the Casper College Foundation, and she was also honored that same year by Beta Chapter – Delta Kappa Gamma for her outstanding contributions to education in Casper. In 2012, she won the Woman of Distinction award in Casper.

She sang in the church choir of First Presbyterian Church, where she was a member and served as an elder. In later years, she sang for a time in the choir at Shepherd of the Hills.

Survivors include a stepson, Leland F. Scifers, Jr., and his wife, Betsy, of Kalispell, Montana, and two grandchildren. She was preceded in death by her husband, parents, and a brother, Dwayne.

Bustard’s Funeral Home and Crematory is in charge of arrangements.