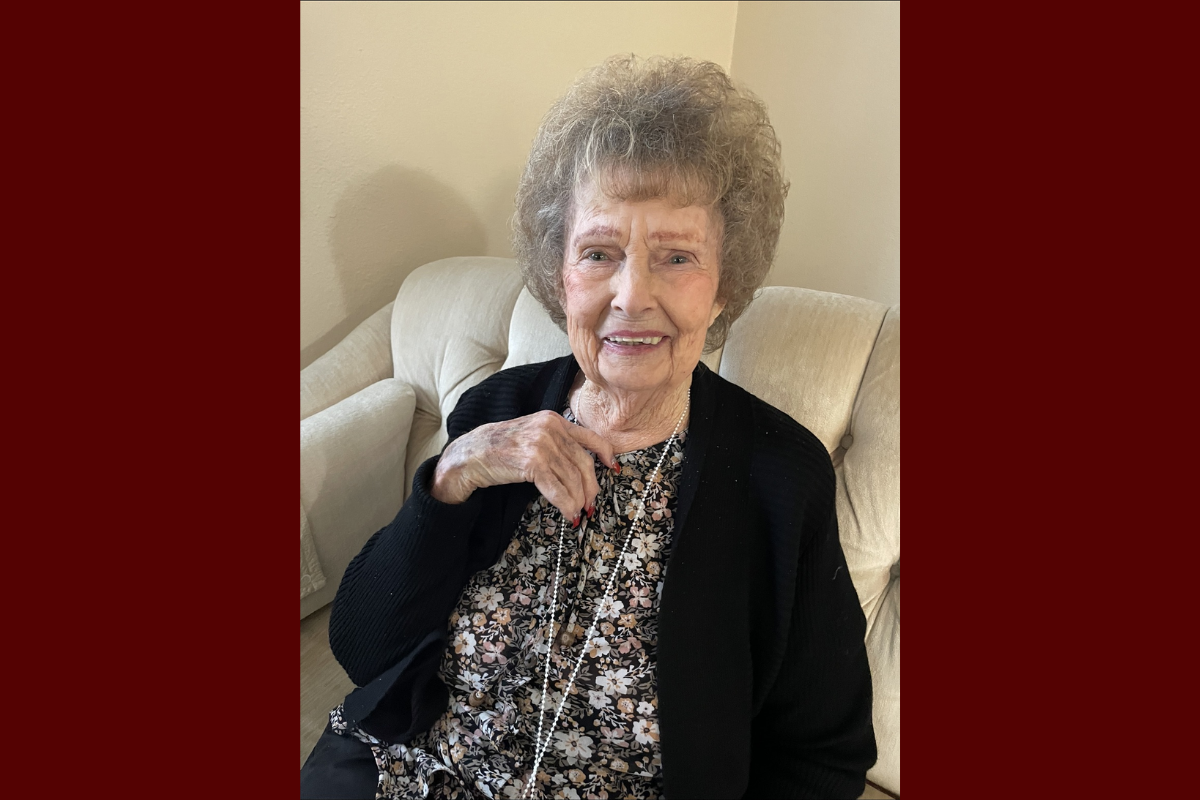 Eva Mae was born in Okmulgee, Oklahoma. She was the daughter of Joe & Bertha West. She was raised in Tulsa, Oklahoma until her family packed up and moved to Rangley, Colorado.

There she met Henry Leo Ficken and they were married July 28, 1947. They moved to Casper in 1950. They had two children: a daughter, Patricia, in 1948 and a son, Joe, in 1955. Eva was a homemaker until 1963, when she then went to work for Specialized Answering Service, until Control Data Corporation opened in Casper.

She retired for a short time and went to work for IDS Financial Services until 1996. She loved bowling, bingo and going to the casinos. She also loved being surrounded by her family.

She was the caregiver for her husband Leo for many years as he was going through dementia.

Eva was preceded in death by her husband of 72 years, her parents and her grandparents.

A celebration of life will be held by family at a later date.

Karan Waldock, 76, passed from Earth to her heavenly Father’s arms May 10, 2022. She was doing what she loved, preparing her backyard for the summer season as she looked forward to countless gatherings with her family and friends.

Karan was born March 12, 1946 in Bakersfield, California during an earthquake…the Earth was shaking when Karan was born. She was born to Fritz (Jack) and Bonita Adams. Karan’s dad worked in the oilfield, and they bounced from town to town until they finally ended up in Gillette, Wyoming, where Karan graduated high school.

Karan continued her education at Casper College. It was during this time she met the love of her life, her forever companion and friend, Mike Waldock. On June 26, 1965, Mike married Karan in Casper, Wyoming. They had two children, Stacy Murphy (J.D.) and Matthew Waldock (Chris). Mike and Karan were happily married for 54 years. Mike preceded her in death in October 2019.

Karan spent the majority of her married life as a homemaker raising Matt and Stacy. She loved every part of being their mom. They often arrived home from school with fresh-baked cookies and a hot homemade meal. Dinner was spent around the table discussing the day’s events.

Karan has three grandchildren, Mariah, Christian and River; a great-grandson, Remington; and a great-granddaughter, Delilah, who was the light of her life. She adored them and they loved their Mimi. She would often be caught telling them she loved them more!

She loved and served the Lord all her days. Karan lived by the motto “Choose Joy” — joy for life, family, and God. The word “joy” could be found everywhere in her home. She brought “joy” to all in her life.

We will miss her the rest of our days, until we meet again. Knowing she is with Mike and our heavenly Father brings us great comfort.

In lieu of flowers, please consider a donation to P.E.O., which Karan was part of. It is a philanthropic educational organization whose mission is to educate women through loans, grants and scholarships.

Roger was born January 16, 1946, in Sisseton, South Dakota, to Violet Elinor Lindstrom. He was raised by Violet and his stepfather, Delton Everett Cardwell. He attended North High School in Minneapolis. At 17, he left high school and joined the military on January 24, 1963. Roger served in the U.S. Army, 101st 82nd Airborne, from 1963 to 1970. During that time, he completed his basic training at Fort Bragg, North Carolina. Afterward, he went to jump school in Fort Benning, Georgia. He did two tours in Vietnam, and he worked under General Westmoreland while serving in Vietnam. After he got hurt, he became Westmoreland’s personal cook. He was honorably discharged from the Army on May 31, 1970, receiving the 4th highest award, the Bronze Star. He continued to serve his country through the Minnesota National Guard, and when he moved to Wyoming, he served in the Wyoming National Guard.

Roger married Gracia Ann Piechowski on June 16, 1973, at St. John’s Catholic Church in Ortonville, Minnesota. They had two children: Tanya Marie in 1978 and Marc Allen in 1981. Roger moved to Casper in 1979. Gracia and Tanya followed him in 1980. Roger and Gracia would later divorce.

Roger worked as a plumber for a number of years in Ortonville, Minnesota and Casper, Wyoming. Throughout his 20s and 30s, Roger had jobs that were focused on plumbing, heating, A/C and refrigeration. With this knowledge, Roger decided to go to Eastern Wyoming College in Torrington and get a degree in HVAC & Refrigeration. After college, he was the Maintenance Supervisor at the Dick Cheney building in downtown Casper, as well as other federal buildings around Wyoming. He did everything from running the boilers and fire alarms to setting up the Nativity Scene at Christmas.

Roger loved horses. From a young age, he would go to his Grandma and Grandpa Lindstroms’ in Summit, South Dakota, during the summers. He would help put up hay and work the farm. That’s where his love of horses began. This would become a lifelong passion. As an adult, Roger owned numerous horses. His favorites were Junior, an Appaloosa, and Tryann, a Bay quarter horse. Roger enjoyed not only riding horses but also breaking and shoeing them. He also loved trailing cattle and sheep. Roger adored living in Wyoming. He helped work various cattle and sheep ranches in the area, fostering his love of the West with his daughter and son.

Roger also loved hunting antelope, deer, elk and moose. It was a pastime he and his son enjoyed together every year they would draw hunting tags. One of Roger’s proudest moments was when he drew his cow moose tag in 1996. He and his son, Marc, went to Bounderant, Wyoming, and completed a successful hunt. Then, in the fall of 2001, Marc drew a tag for a bull moose and on October 2, he too, was successful. Both hunts, Roger and his son packed the animals out on horses.

Roger also enjoyed spending time at hunting camp in the Bighorns, parking at Hunter’s Corral and camping at Soldier Park outside of Buffalo, Wyoming. He and his children would go visit Dave and Sharon Sprung, good friends from Ortonville, there several times a year. His son has fond memories of hunting camp. A motto known to all was “What happens in hunting camp, stays in hunting camp.”

Roger adored old-time country and western music. He would always have it playing. His children fondly remember him listening to Charlie Pride, Merle Haggard, George Jones, Patsy Cline, and Johnny Cash. He also enjoyed watching Elvis movies. One of his daughter Tanya’s fondest memories is listening to country music and riding countless hours and hundreds of miles on horseback with her dad. Another fond memory is baking with him. Roger was a fabulous baker. He enjoyed making homemade bread and cinnamon rolls. And finally, Roger could grow anything! He had the greenest thumb around. The last couple of years, he was in charge of growing tomatoes for Tanya to make and freeze pasta sauce for the winter.

Roger met Cheryl Cross, and they enjoyed many happy years together before her death in 2019. They bonded over Fast Action Bingo. Roger enjoyed spending quality time, not only with Cheryl but also with her children, Travis and Shasta, and their families.

Our Savior Jesus Christ has destroyed death and brought life and immortality to light through the Gospel. Let us remember with thanksgiving what God has done through Thomas W. Lucous.

Thomas was given life by his creator and was born on July 28, 1929 to Wallace and Anna Lucous. On August 1, 1929, he received the gift of Holy Baptism and became a child of God. On March 23, 1969, he publicly confessed his faith and was confirmed in the Lutheran faith. Thomas remained an active member at Trinity Evangelical Lutheran Church, Casper. He passed away on May 12 in Casper, Wyoming.

Thomas was preceded in death by his wife Marilyn Lucous.

Audrey Gay Baalhorn, 90, was born November 7, 1931 in Gillette, Wyoming to Mildred and Uber Frederick. She was the middle child of nine.

Audrey passed away May 14, 2022 in Casper, Wyoming, surrounded by her family.

She attended school in Gillette and graduated in 1949. The principal of the high school had a conversation with Audrey’s parents, and they decided teaching was in her future. She began teaching in country schools that fall. She then continued her own education and received a Bachelor of Science in education from Kearney State College and received her Master’s degree later.

In 1951, she had a brief marriage to Mr. McCrary; they had one son together, Texter McCrary (Mayette).

The year 1955 brought upon a marriage to Billy Baalhorn. Audrey described him as tall, handsome and helpful. Their children include Billy Baalhorn (Donna), Pamela Burrous (Chuck) and Wyatt Baalhorn (Jannice). They were together for 49 years. They had a big batch of grandkids: 11 grandkids, 14 great-grandkids and three great-great-grandkids.

Audrey’s life was incredibly full and fruitful. After country school, she taught first grade in Kilgore, Nebraska for 11 years, then in Shirley Basin for two years. She then moved to Encampment, Wyoming, where she taught until her retirement. Audrey was excited to announce that she taught first grade to the last graduating class of the millennium.

She loved gardening, fitness and traveling, which she did frequently. In 1995, she joined the Glenrock chapter of TOPS and was state president and crowned Queen for her weight loss goal completion.

Audrey was an advocate for veterans and was a lifetime member of the VFW club ladies auxiliary. She was Wyoming state president and had traveled all over the United States with the VFW.

She was a member of the local master gardener club and enjoyed growing hollyhocks and roses.

Audrey was preceded in death by her husband Billy, sister Betty and brother Doug.

A funeral service will be held on Wednesday, May 25 at 2:00 p.m. at Bustard & Jacoby Funeral Home.