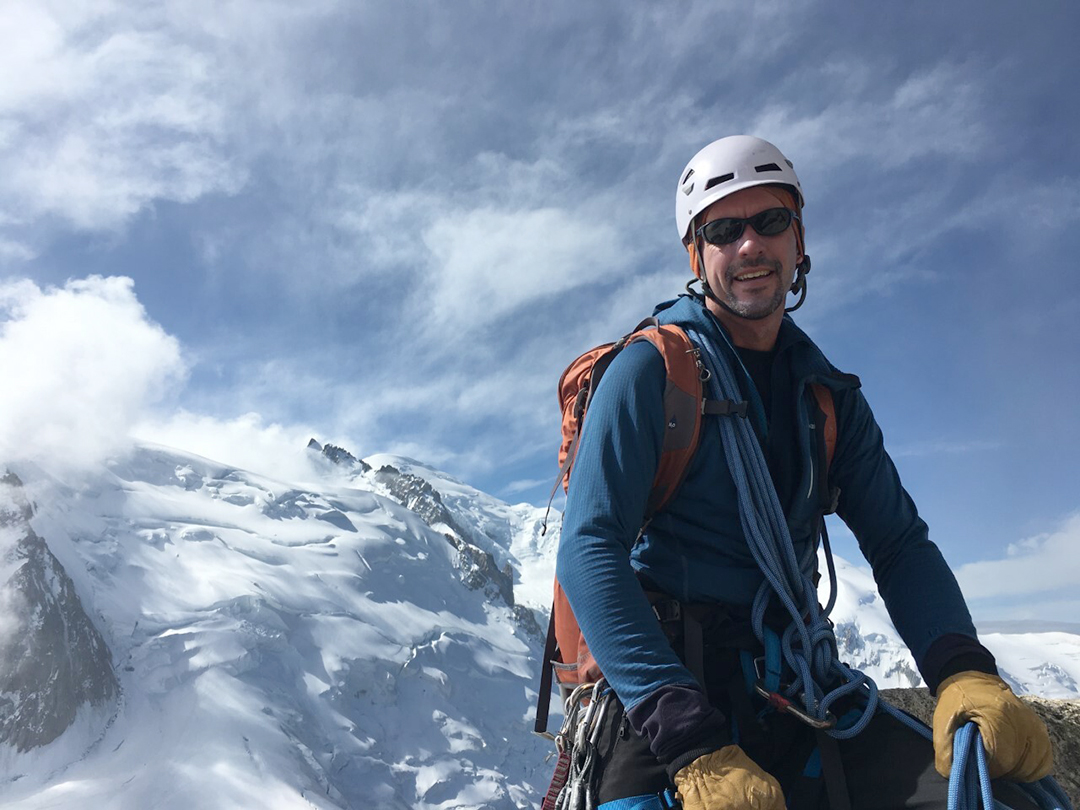 James Allen Brown, known as “JB” by many of his friends, beloved husband, father, brother, and friend, passed away unexpectedly on Friday, May 20, 2022, at age 43.

JB will be remembered not only for his incomparable backcountry skill and grand ideas, but for his sarcastic wit, warmth and companionship. JB’s caring spirit and generous heart were felt by everyone he met. Nobody was a stranger for long in a room with JB. He had a special gift for instantly putting others at ease and bringing out the best in them. His deep love and appreciation for the outdoors were defining traits, only surpassed by his love for his family.

Born in Houston, Texas, JB fostered his love of the outdoors as a youth leader in the Boy Scouts, where he attained Eagle Scout rank. As a student at Texas A&M, he took a leadership role with both the Emergency Care Team and TAMU EMS as a paramedic. While living in Hotard Hall, he formed lifelong friendships with the “Hotard Boys” and became a devoted Aggies fan and active TexAgs participant. JB was part of the medical response team during the 1999 Aggie Bonfire collapse. While traumatic, the tragedy helped him navigate his career path and discover strengths within.

Following college, JB relocated to Jackson, Wyoming, where he joined the ski school at Jackson Hole Mountain Resort as an instructor. He taught in the winters in Jackson for almost a decade before leaving to chase his future wife. After a summer apprenticeship as a mountain guide, JB discovered the path he had been curating all along.

Mountain guiding was the perfect fit for his deep appreciation of the backcountry, his passion for skiing, and his talents for mountaineering and climbing, along with his background in rescue skills. JB was a gifted teacher; he made people feel seen, inspired confidence and trust in the most challenging of environments and encouraged the greatest of adventures. Guiding became more than a career for JB; it was a way of life.

During his prestigious career, JB climbed, skied, or guided in almost every significant mountain range in the United States and on four continents, becoming a highly sought-after guide, and eventually a mentor to many guides. JB was co-owner of Sierra Wilderness Seminars (SWS), which includes SWS Mountain Guides, California Ski Guides, and California Rock Guides. Additionally, he served as the Sierra Avalanche Center president. He was an AMGA-Certified Ski and Alpine Guide, and the 2007 recipient of REI’s Guide of the Year.

Despite his many accomplishments, JB was a perpetual student of his environment and missed no opportunity to learn from every experience. JB found the most satisfaction in teaching, mentoring, and sharing his love of the mountains with clients and aspiring guides. In more recent years, JB rediscovered a passion for big game and duck hunting. He loved being outdoors in a different capacity and spending time in the peaceful, cold, early morning air with his black lab, Facet.

His greatest joys in life were his wife, Emily, and daughter, Susannah. JB was deeply proud of Emily’s accomplishments and she of his. In the truest sense of partnership, Emily and JB supported each other’s passions and dreams, working towards them together. Most recently, they lived in Reno, Nevada, but JB’s heart was always in Wyoming. He was looking forward to ultimately retiring on their property looking out at Glory Mountain. Every image of JB with his family, whether at home or in the mountains, was marked by an enormous smile, revealing deep, genuine happiness that radiated to those around him and is mirrored in Susannah’s face.

JB will be deeply missed, but his family and friends will always cherish his adventurous spirit, his humor, and the unforgettable times they spent together.

He was predeceased by his mother Susan.

A celebration of life will be held in Jackson Hole in the fall. In lieu of flowers, the Brown family would appreciate donations in JB’s honor to the Sierra Avalanche Center scholarship fund and Ducks Unlimited, https://www.ducks.org/get-involved/memorial-giving.

Kathleen M. “Kathy” Whitney passed away on June 1, 2022, at the age of 90 at Lifecare Living Center in Casper, Wyoming, surrounded by family.

Kathleen was born May 27, 1932, in Chamberlain, South Dakota, to Clayton E. and Mary Bell Rosenberger. Kathleen graduated in the top third of her class from Chamberlain High School in May 1950.

After graduation, she was employed at several companies in Chamberlain, the final being Brule County Superintendent of Schools, and as fill-in teacher at a rural school.

In late 1951 she went to visit cousins in Rapid City, South Dakota, where she met an airman named John A. Whitney, Jr. After a whirlwind romance, they planned a wedding for January 14, 1952, but the Military had other plans and John was sent that date TDY to Ft. Hood, Texas. Kathy then joined him, and they were married February 9, 1952, in the Chapel on Base at Ft. Hood.

They returned to Rapid City after three months of TDY as John was still actively employed by the USAF. Son, John (Jack) Patrick, was born December 22, 1952, at Rapid City AFB (now Ellsworth AFB).

In 1953, the family moved to Chicago, Illinois, where they resided for nine years. Kathy was employed as a clerk-typist. Their daughter, Teri Ann, was born June 9, 1956, in Chicago.

They moved to South Dakota in 1961 and to Casper in 1966, where they bought their first home.

Kathy enjoyed working as well as being a homemaker and was employed as an EMT and medical assistant, five years for Dr. T.L. Holman and nine years for Dr. Nelson Frissell.

After an auto accident in June 1979, she was forced to recuperate for a short time. It was not long after that she took a job in Human Resources/Payroll for the Crude Company for seven years and the City of Casper for two years, and was Clerk Treasurer for the Town of Bar Nunn for 20 years. She retired in 2007 at the age of 75 to care for her husband, who was very ill, but he passed away December 31, 2009, of failing heart valves and complications from a stroke.

Kathy was a Certified Emergency Medical Technician, member of the American Businesswomen’s Association, Sweet Adeline’s (Women’s Barbershop) and a 20-year member of WAMCAT (Wyoming Association of Municipal Clerks and Treasurers), where she served from 1988 to 2007. Board Member, Secretary, President, Past President and received the prestigious plaque as “CLERK TREASURER OF THE YEAR” for both 1992 and 2001.

She is survived by her son John (Jack); daughter-in-law Carol; daughter Teri; son-in-law Ruslan Zhelbakov; grand-daughter Venessa; great-grandchildren Trevor, Wade, Aspen and Cowan; cousins Betty Hitson and family and Jack Hammon and family; and other relatives as well as a great many dear friends.

In lieu of flowers, the family is asking for memorials to HUA (Hearts United for Animals), P.O. Box 286-Auburn, NE 68305, or Casper Humane Society as Kathy loved her pets dearly.