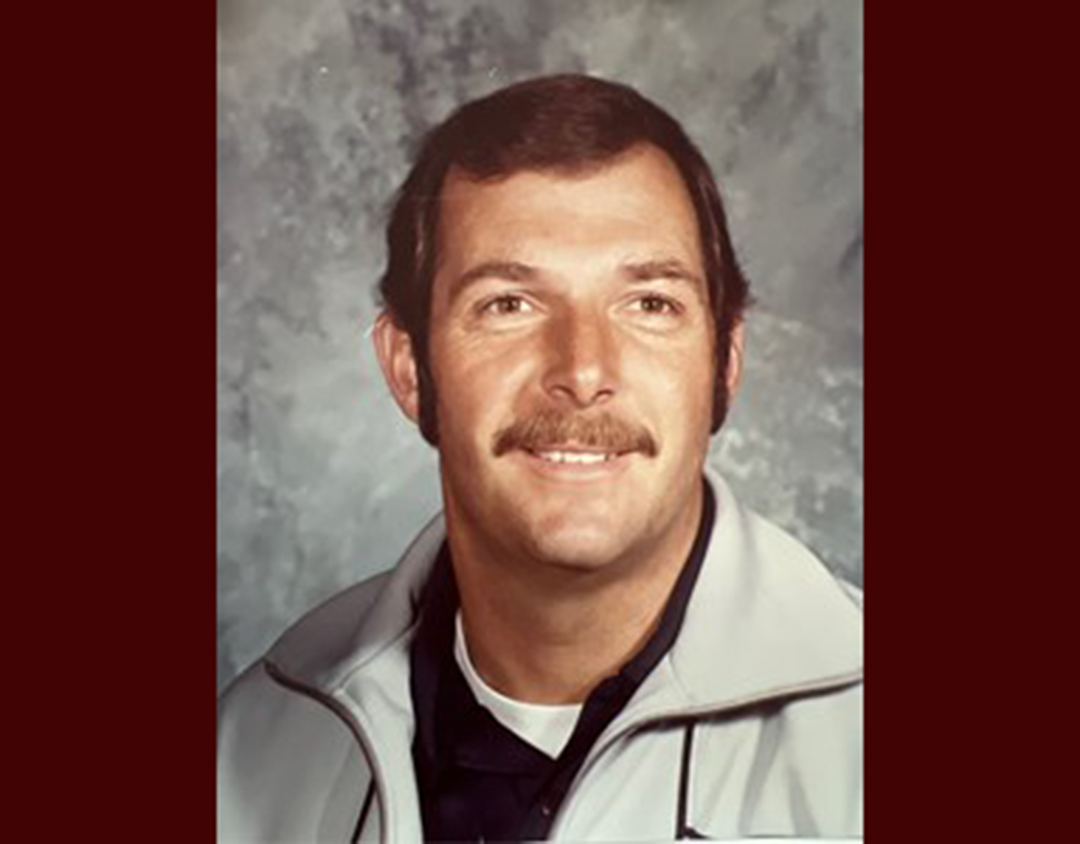 Jay was a devoted husband, father, teacher and coach who loved people and loved teaching others how to be happy.

He was an avid outdoorsman who enjoyed hunting and fishing. He was known for going to fishing holes that had been “fished out” and coming home with the total limit. Amazing!

Jay served in the Utah National Guard, where he became a captain, was an expert using the M1 rifle and was an “Arty Surveyor,” or artillery boss. His unit was B-Battery 1st Battalion 140th Artillery. Jay served from February 25, 1964, to February 24, 1970.

Jay was a devoted school teacher and received his college degree from Utah State University and earned a Masters from the University of Wyoming in Special Education. He began his teaching career in Trona, California, for his first 11 years. He spent most of his career in the Natrona County School District, where he served for 17 years. He was a leader among men, and his students adored his funny personality and willingness to always help. He would help with just about anything. He started many clubs and coached football, gymnastics, tennis and baseball, just to name a few.

Jay was devoted to serving his fellow men and teaching them how to do the same. He was a rescue diver for the Natrona County Sheriffs Office, and was an instructor/trainer for that team. At one time during this service to his community, he is remembered having been outside with his son playing catch when a call came to the house for Jay’s help in a rescue dive. He immediately ran into the house and came back out with his dive gear and was off within seconds of the call. He was always ready and always there.

Jay was a part-time Sheriff’s deputy who loved working special events, including the Central Wyoming Fair and Rodeo. Jay was a paramedic in San Bernardino, California, and also part of Search and Rescue for Inyo County, California (Death Valley). Jay served as a tour guide for whitewater rafting on the Kern River in Kern County, California.

As life progressed, Jay became the father and dad of 10 children and a devoted grandfather of 24, and loved spending time with everyone. He was always full of love and humor and never said a demeaning word about, or to, anyone. He was constantly seeking opportunities to take his grandchildren fishing and to live those experiences of their first catch with them. With so many children and grandchildren, he would often set up each child’s fishing pole and by the time the last kid’s pole was finally ready in the water, he was called back to another child to untangle another or help reel in someone else’s. Come to think about it, it’s possible he never even put in a pole for himself.

Jay loved sports. Football, baseball, tennis, gymnastics and boxing are all things he coached and excelled at. It mattered not to him what the sport was; he was right in the middle of the action helping athletes improve on their skills and confidence. He was well known to go to his children and grandchildren’s sporting events and help the coaches from the sidelines and to even coach his kids through any struggle they were experiencing. He is remembered for attending every baseball game, sitting in the front corner of the bleachers, by the dugout, and whispering words of encouragement, always helping. He never had a hard word to say to those he coached. He spent countless hours in the backyard with his kids playing catch, teaching flips on the trampoline while burning meat on the grill.

Jay was never afraid to learn new things to become a better coach, and when he coached gymnastics at Natrona County High School and his athletes would walk off the floor or any other events with frustration, he would help and comfort them by enveloping them in his notorious “bear hugs” and the safety of his stature. He never dwelled on their shortcomings or misgivings and he knew these hugs were a way to help his athletes move on with confidence and trust in him.

W7DRJ was how Jay was known in the amateur radio world, where he achieved “EXPERT” class. He loved HAM Radio and the potential with which they operated. He was constantly tinkering, building, recording, transmitting, and speaking with people all over the world. He was Emergency Radio Technician/Communicator for the American Red Cross. He served as Civil Air Patrol King 4 Emergency Communicator. He loved building bigger and better antennas which gave him the capability to reach anywhere in the world. His one desire with the HAM radios was that his children would have the same interest and he was anxious to teach them.

He spent his life in the service of others and he wanted nothing more than to improve the quality of life of his family and the people around him. He dedicated years of his life to make a difference in the community for those who are suffering. When he took over Joshua’s Storehouse, it was on the brink of destruction. Jay brought this organization back to life to be one of the most prominent and successful nonprofit organizations in the city of Casper. Jay took to heart the needs of others and made it his life mission to help others in any capacity he could. The concept of improving lives ran through the center of everything he did. He was not selfish by any definition.

Just like with Joshua’s Storehouse, Jay had the Midas touch and developed a winning program for the Special Olympics of Wyoming, after which he became its director. Jay was an originator of the Festival of Trees that brought profits to Special Olympics of Wyoming. He had a special place in his heart for children with special needs and desired them to feel the same pride and success anyone else would get from their experiences with sports. He believed in empowering these athletes and providing them with opportunities they might not otherwise have. Through this work, Jay hoped to make the world a better, more joyful place and knew that those with disabilities were the key. Jay would always help the underdog and loved those students others did not. He lit the fire and passion in the hearts of others to join this cause for the same reasons.

While his children were young, Jay spent many of his days working with, and volunteering his time to, the American Red Cross to help save lives. No matter the weather conditions, Jay was always lending a helping hand. He assisted in search and rescue events in coordinating their rescue efforts and communications as well as supplies in order to enable the search and rescue success. While with the American Red Cross, Jay taught first aid and CPR and loved knowing this skill would help to save countless lives for years to come.

Jay was a marvelous storyteller and was always telling fantastic stories that were in fact… true. “If I told you all the things I’ve done, you would say I was lying.” He is truly a great man who had the shoulders of a giant. He will be missed greatly by all who had the blessing of his presence.

Newcomer Cremations, Funerals, and Receptions in Casper, Wyoming, is entrusted with the arrangements.

Marion Reed died Saturday, June 11, 2022, at Wyoming Medical Center of heart failure at the age of 82 in the company of his wife, son and daughter-in-law.

Marion graduated from Macomb High School and enlisted in the Marine Corps.

In the Marines, Marion was an expert marksman and Remington Raider (clerk typist) and played on the Twentynine Palms base traveling football team. Following his enlistment, Marion returned to Macomb, where he met J. Annette Wetzel and married her in 1964.

Annette was the love of Marion’s life, and they remained married for nearly 58 years until Marion’s death. Through the early years of their marriage, Marion and Annette lived in Chicago, then Kearney, Nebraska, where Marion earned his bachelor’s degree in business administration at Kearney State College while Annette taught school and taught Marion to play and love golf.

In 1970, Marion and Annette moved to Sheridan, Wyoming, where they found their true home and where he would live for the rest of his life.

Marion worked as a psychology instructor and dean of students at Sheridan College and Annette taught PE in the public schools. Marion loved hunting, fishing, camping, and golfing.

For many of their Wyoming years, nearly every summer weekend found Marion and his family in the Bighorn Mountains. In 1977, Marion and Annette quit their jobs and purchased Big Sky Cabinets, renaming it Scotchman Home Center in honor of their shared Scottish ancestry.

Marion took great personal pride in his work. He installed stoves and built and installed cabinets and countertops at Scotchman for 27 years.

Marion was easily recognized by his height and build, but will be remembered for his soft-spoken kindness. Marion and Annette had one son, Taylor, a beloved daughter-in-law, Charmaine, and one grandson, Quillan. Quillan was one of the brightest and most loved people in Marion’s life.

In retirement Marion enjoyed his daily coffee group, whom he delighted working on projects with. Marion and Annette also delivered Meals on Wheels and traveled regularly to see their son and his family in Florida until they were able to move back home to Wyoming.

He was preceded in death by his parents, Clarence and Dorethy (Barclay) Reed. Marion is survived by his wife Annette; two younger brothers Cliff, who lives in Muskegon, Michigan, and Rich, who lives in Sheridan; son Taylor and daughter-in-law Charmaine, who live in Casper; and grandson Quillan, who is interning in Wisconsin.