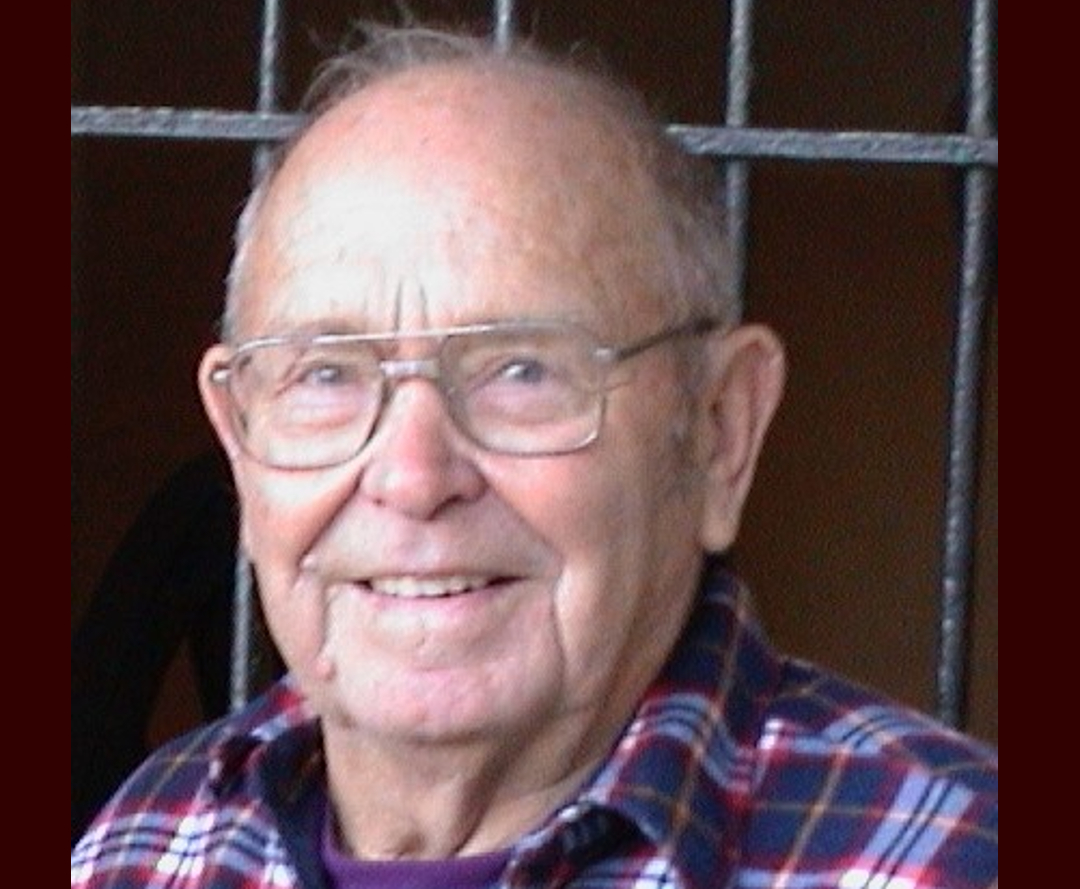 On July 26, 2022, the Clamp family lost our Dad, our Popper, our Hero when he left us to join Mom. Dad spent his last days surrounded and cared for by his kids and grandkids in their brick house in Mills where he raised his children and enjoyed his grandchildren.

Ray M. Clamp was born on November 27, 1925, in Wheatland, Wyoming, to Wilda Marie (Corson) and Joseph Clamp.  His dad left when he was young and Ray grew up fast, always there to help care for his brother, George, and always loving his “Ma.” He moved frequently during his childhood, living in countless Wyoming towns and attending multiple schools a year. It was a hard time, but he had good memories thanks to a special relationship with his two uncles, Wes and Howard Corson.

He met the love of his life, June Curtis, at Torrington Junior High, but would leave her to enlist in the Army. Ray was one of the younger veterans of WWII. He entered the Army at age 18 and served during the war and after, helping with the reconstruction, earning service credit in both WWII and the Cold War.

After returning from active duty, Ray and June were married in Harrisburg, Nebraska, on August 5, 1946. Ray soon became an apprentice bricklayer, working with June’s father. In July 1947 the young couple was blessed with the birth of their son, Danny Ray, only to lose him four months later from viral pneumonia. This loss would be felt for the remainder of Ray’s life. He carved a gravestone for Danny and then re-carved it on the 50th anniversary of Danny’s death.

The Clamps would have five more children with the birth of Linda the next year, followed by Sandra and Steve while Ray was working at the University of Wyoming. Curtis and Scott joined the family when they settled in Mills, first in their little trailer before moving our house on 7th Street.

Long before it became the norm for fathers to take part in their kids’ lives, Ray was involved in all our activities from PTA to youth sports and on to motocross and 4-H. His company sponsored racing cars, ball teams, car shows, hockey tournaments and livestock sales. Ray was instrumental in the remodel of the Junior Baseball Park with mostly volunteer time and materials. He was always willing to pitch in with community projects and was a charter member of the Mills Volunteer Fire Department and the Mills Mt View Lions Club. He was both a general and masonry contractor and was proud of being one of the last union brick contractors in Wyoming. His company, Ray Clamp Masonry, became well known and respected for the quality of their work and his sons and son-in-law continued that reputation.

Ray had a big presence in the lives of his grandkids. Named Popper by his first grandson, Kenny, he became an institution for not only our family but for our community. Each of his kids and grandkids have stories to tell of being rescued from car trouble, home repairs or even being bailed out by Dad/Popper. That service was many times extended to our friends. The Clamp kids weren’t always easy to raise, but we have all made it to “old” age due much to his efforts. The family continued to gather every Christmas with 50 to 65 in attendance.

Ray and June spent their retirement exploring the states and Canada in their motorhomes, traveling from coast to coast to huge cities and country roads, many times taking the road less traveled long before GPS was available. From trips to Europe to revisit his war years to camping trips learning to fly fish, children and grandchildren were included in these adventures.

With his sons’ help, Ray restored several cars, including the first car and pickup he ever owned: a 34 American Austin and a 55 Ford F100. He was a fixture at the car show, still winning awards at this year’s Cruisin’ Show.

Ray had the ability to fix anything with resources on hand, a skill we all took for granted. Sadly, the one thing that he couldn’t fix was Mom’s health. He gave all of his time and love to keep her with him, but he lost that battle in August 2020. He then fought hard to stay with us and proved what we already knew. Our Dad/Popper was the strongest and most amazing person and we were the most blessed family to have him for almost 97 years.

The family would like to thank Hospice Transitions, Dr. Lloyd, and Mysty, his therapist, who gave loving care to our Dad. They made it possible for us to keep him home with us, making his final days more comfortable. We would also like to thank John Huff for allowing us the use of Yellowstone Garage for Dad’s celebration.

Virginia Sue Harris passed away on July 28, 2022, in Casper, Wyoming, at the age of 95 due to complications resulting from a fall. She was surrounded by family, who will continue to honor her by living their lives to the fullest.

Virginia was born on Dec. 5, 1926, in Scotts Hill, Tennessee. She moved to Wyoming, where she graduated at Powell High School and Casper Junior College in Pre-Law.

While working in Casper, she met and married Glenn Richard Harris, a geophysicist at Shell Oil Co.

They continued their Shell career overseas in Nigeria, Holland and Canada and retired in 1986 to Cody, Wyoming.

Virginia was an accomplished skier, golfer, bridge player and world traveler, having been to all seven continents. She was an active member of the Daughters of the American Revolution and the Buffalo Bill Museum. She loved a quiet evening among friends with a glass of wine in hand.

Virginia is survived by her two sons Richard and Jeffrey, five grandchildren, and eight great-grandchildren.

The funeral will be a private graveside ceremony with only family members present.

Toni was born to James and Cora McKnight on July 7, 1958, as the second of three children to the couple in Warren, Ohio. She was creative and dabbled in arts, including painting, drawing and ceramics.

Toni would leave Warren for Casper, Wyoming, with her husband of 43 years, Kenneth Platt. They have two daughters, Kimberly Platt and Melissa Platt-Caster. In the community, she was known as “Momma T” to many. In her life, she has been a unit secretary for Wyoming Medical Center and a receptionist at Wyoming Citizens Service Inc.

Her hobbies included quilting, playing bingo, painting, shooting pool and spending time with her husband rock hunting. She was a member of the Natrona County Rockhounds Club and learned the basics of lapidary with Kenneth. She had started to make a quilt out of Crown Royal bags, a project that she was excited to finish. She loved westerns, reality TV and country music.

Toni is survived by her husband Kenneth Platt; her sister Barbara Wright; her brother James McKnight; her two daughters Kimberly Platt and Melissa Platt-Caster; and her three grandchildren Madison and Kylee Caster and Anthony Mitchelson. She was preceded in death by her parents James and Cora (Sigler) McKnight.

Toni requested to be cremated. On July 30, 2022, there was a celebration of life at the Hilton Garden Inn.

Our beautiful soul Jennifer Rebecca Magee Wilson left to rest peacefully in the arms of Jesus on July 24, 2022.

Jennifer was born in Casper, Wyoming, to parents Karon Rufenacht and Robert Magee on May 2, 1972. Graduating in 1990 from Kelly Walsh High School, Jennifer went on to work multiple office manager jobs, the last being with K & M Pet Products.

Most important to her was her role as a mom and homemaker. She met Shawn Wilson and united in holy marriage on May 29, 1999. Jennifer was an amazing gardener, chef, and fisherman and had a love for animals, especially her Black Labs. She received the gift of holy baptism on Oct. 29, 1972, and was confirmed on May 18, 1986, at Trinity Lutheran Church.

Jennifer is survived by her loving husband Shawn, amazing children Parker and Paige, mom Karon, dad Robert, brother Tim, sister Amy and husband Mitch, half-sister Michelle, in-laws John and Linda, and sister-in-law Sheryl and husband Ed. Also by the many nieces and nephews she loved so dearly, as well as numerous aunts, uncles and cousins.

She was preceded in death by her daughter Alexandria Rose, stepdad Ric, grandparents Rose and Fred Burback and grandparents Virginia and Blake Magee.

A funeral service was held at 10:30 a.m. July 30, 2022, at Trinity Lutheran Church in Casper. Burial followed at Highland Park Cemetery. In lieu of flowers, donations to the family to establish a college fund for Paige would be greatly appreciated.

Gordon Lee Wolford, age 80, passed away Thursday, July 28, 2022, peacefully at his home. Gordon was born Nov. 8, 1941, to Walter and Barbara (Morris) Wolford. He was born the first child to Walter and Barbara. He attended schools at Park Elementary, Dean Morgan and Natrona County High School. He graduated from Arizona State University with a bachelor’s degree in statistics. He worked for and retired from the State of Wyoming.

No services will be held per his request.