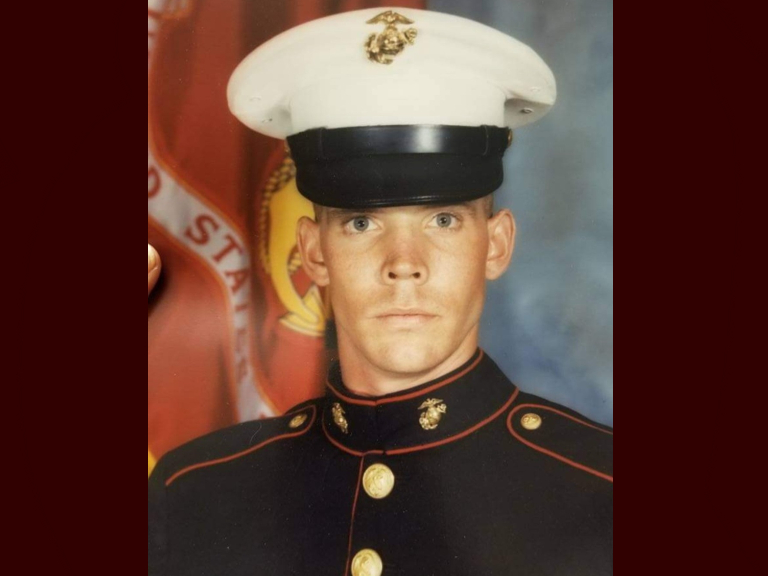 Mike was born in Casper and attended Casper schools. He participated in many activities, he was an altar boy at St. Anthony’s, a paperboy, and had several small lawn mowing businesses as a kid. He enjoyed sports and Boxed Golden Gloves. He made several trips to Ireland.

Mike grew bored with Casper and school sports and enlisted in the United States Marine Corps at age 17. After boot camp in San Diego and Infantry Training School at Camp Lejeune, North Carolina, he shipped over to Guam where he was stationed with the Marine Barracks. He boxed all across the South Pacific. Mike then transferred to Camp Lejeune, North Carolina, where he joined 2nd Battalion 4th Marines (The Magnificent Bastards) as a rifleman.

He fought in Operations Desert Shield, Desert Storm, and Operation Sharp Edge (The assault and liberation of the U.S. Embassy in Monrovia Liberia Africa).

After receiving an honorable discharge as a disabled veteran, Mike became a Houston, Texas, policeman then he moved to Louisiana where he spent 20 years as a policeman, a sheriff’s deputy, and a marshall until his retirement in 2018 as a K-9 captain.

Mike moved back to Casper where he “putzed” around and looked up old friends and visited old places and sights.

He is survived by brothers Danny (Christine) of Colorado, John of Casper, Sisters Juli Thibodeau (Mike), Courtney Potter of Casper, and Beth Gooddell (Glen) of Douglas, and wife Louise of Casper. Mike’s surviving children are Adam, Yonnie, Austin, and Anton of South Carolina and Derrick and Anson Robin of Louisiana.

Mike’s ashes will be interred and placed in the wall in a silent Ceremony at the Oregon Trail Veterans Cemetery. He will have an Official Marine Corps Funeral in July 2023. Mike was a hero many times over and will be missed.

Remembrances for Mike are Golden Gloves Boxing, the Veterans of Foreign Wars and the Disabled American Veterans.

Marshall Wayne Hardin died Dec. 13, 2022, surrounded by his family at Central Wyoming Hospice. Marshall was born on July 1, 1944, in Julesburg, Colorado, to Wayne Hardin and Nellie “Loretta” Sheldon. He spent his youth in Oshkosh, Nebraska, helping his family in the farming community. He went to public school until the eighth grade where he had an argument with the teacher and never went back.

He married Charlotte Jay in August 1965 and later divorced in 1972. From that union he gained two children Valerie and Buril. He then met Dorothy Hicks in 1973 in Mullen, Nebraska. The couple then married on Oct. 28, 1975, in Duchesne, Utah, gaining him two sons from Dorothy’s previous marriage, Dale and Dennis. He worked construction and drove truck in various states before the family finally settled in Casper, Wyoming. While in Utah, he perfected his famous “Mormon spuds” recipe.

In 1981 he started work with Natrona Country roads and bridge where he worked for 27 years before retiring in 2008. During those years he gained an “adopted” son Emil, Dennis and Dale’s best friend. Emil came home with the boys one day and has been a part of the family ever since. After he retired Marshall and Dorothy wintered in Nevada, Missouri, where they spent time with Buril and Val’s families. After traveling back and forth for around 10 years they settled back in Casper. Marshall was blessed with five children, 15 grandchildren and 15 great-grandchildren.

Marshall is preceeded in death by his parents Wayne and Loretta Hardin, and his brother Dale Hardin.

Services will be sometime in the spring. Please send flowers and other condolences to 2123 Doane Lane Casper Wyoming 82601.

Arrangements are under the care of Bustard and Jacoby Funeral Home, 600 Cy Ave, Casper, WY 82601.

Maxine Trejo Stevens was born Sept. 9, 1948, in Rawlins, Wyoming, to Max and Flora Trejo. She was born a “blue baby.” Doctors thought she was dead, but Flora saw her toe twitch and alerted the doctors that she was alive.

At 5 years old, it was discovered she had heart problems so her parents rushed her to Denver where they quickly took her into surgery as they thought her heart was about to burst. She was the first to survive the type of open-heart surgery in the U.S. The doctors said she would be lucky to make it to 13 but she did something she took great relish in all her life, proving people wrong.

She had a good childhood, growing up with her two sisters, Christine and Julie, in Rawlins, Wyoming, and spending time with family in Baggs, Wyoming. She graduated from Rawlins High School in 1966 at 17 and as soon as she turned 18, she left for California. In August, of ’67, she would meet the man that she would eventually marry. David and Maxine had a whirlwind romance. Before David was shipped off to Vietnam they were married on January 31, 1968, in Reno, Nevada.

Over the next 25 years there were plenty of ups and downs, moving to wherever the Navy stationed David. Along the way they adopted their two sons, Shawn and Justin. They challenged her patience, as only boys can do, which is why she ended up with a fairly short fuse. When David retired in 1992, they moved to Casper, Wyoming, to be closer to family for their boys, or so Maxine claimed. Being closer to her parents, sisters, nephews, and the rest of her family, Maxine thrived. She went back to teaching at Paradise Valley Christian Preschool. She made sure her boys had everything they needed and that they got regular earfuls for being, well, teenage boys. The family became prominent members of Paradise Valley Christian Church where she regularly attended services until her passing.

She lived to teach, learn, and spend time with family. An avid reader, she started and ran a book club for many years. She was an excellent cook, for which her husband, children, and many others were very thankful. She always enjoyed a houseful of family and friends. Many of which will especially miss her Boston Cream Pie (better known as THE birthday cake). Though a late bloomer to it, she embraced technology as well. Scouring the internet from beginning to end weekly and logging more hours on social media with her cell phone than most teenagers. This was to the endless dismay of her IT, her son Shawn. This constant influx of information made her ability to argue that much more frustrating as she was memorizing (or printing) most of the internet. The plus side was all the ideas she found to teach her grandchildren, who quickly became her new mission in life. Her passion for teaching never left her nor did her desire to learn anything and everything she could.

As the children all grew, she found other passions. Cards with friends. Going on cruises. Playing on house money. She continued to always be there for her family and friends. Especially her children, grandchildren, and great grandchildren. She fiercely loved her husband, even after 54 years.