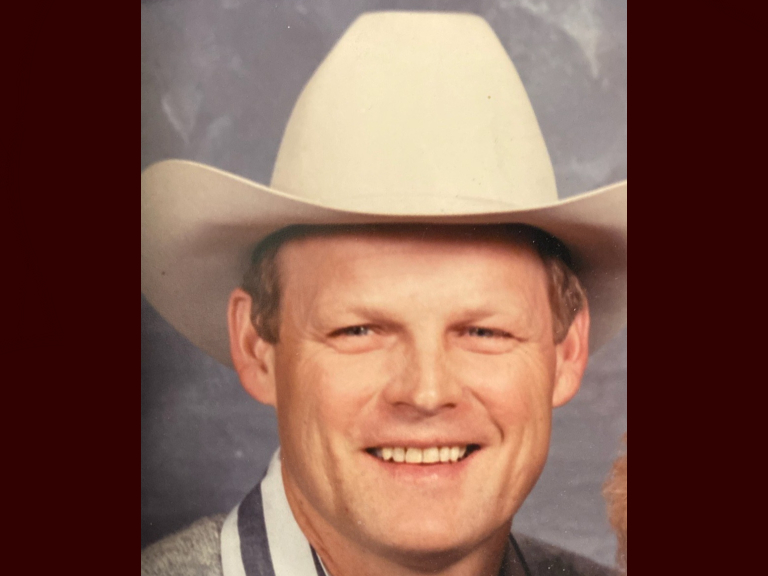 Russ was born on March 25, 1939, in Gailsville, Wisconsin, to Allen Louis Emerson and Mariam Sveen Emerson.

He attended school and lived in the same home in LaCrosse, Wisconsin, until he graduated from high school and joined the navy in 1959. After he was honorably discharged in 1963, he began working for Heilman Brewery Co. in LaCrosse. He married in 1964. He and his first wife had three children, Erik, Kristen and Arne.

In 1974 the family moved to Casper, Wyoming, where Russ began his life’s career with UPS.  He loved talking to people on his route. Anyone who knew Russ could always expect a good joke and great conversation.

In 1987 Russ married Ramola Jean (Jeanne) Stephenson. They were married for 31 years. Jeanne unexpectedly left this world in 2018. Russ was never the same without her. They enjoyed fishing, bowling, playing cards with their friends, spending time with family and dancing. They were beautiful dancers.  Russ also loved to play summer softball. He had a deep passion for the Green Bay Packers and Wyoming Cowboys. His entire wardrobe was pretty much Packers or Cowboys. Russ also spent many years delivering for Meals On Wheels.

Over the past several years it has been hard to watch the process of dementia on his mind and body. He was always thankful for calls and visits.

He was preceded in death by his wife, Jeanne; his daughter Kristen Cordova; his sister, Janet Kessler; and both of his parents.

In lieu of flowers, donations may be made to Meals on Wheels or Paradise Valley Christian Church.

Gerald Wayne Howie (“Jerry”) was born Feb. 22, 1950, to Herbert and Edith (Cox) Howie, in Casper, Wyoming. He grew up in Casper, attended Garfield School, Dean Morgan Jr. High, and Natrona County High School, graduating in 1968. He played baseball, and played football and wrestled in junior high and high school. As a senior, he was part of the first NCHS State Champion wrestling team.

After graduation he attended the University of Wyoming, where he continued to wrestle and major in Industrial Arts Education. On June 12, 1970, he married his high school sweetheart, Dana Hoffhine, and the two finished college together, graduating in 1973, both with their teaching degrees. Right after graduation they welcomed their daughter Jennifer, and their son Craig completed the family in 1976.

During summers in Scottsbluff, Jerry and several teacher friends did construction, remodeling and built several houses, doing any project they could find for extra money. In 1979 the family moved back to Casper, and built their own house, with the help of his parents and Scottsbluff friends, barely finishing before Jerry started his new job at Kelly Walsh High School, teaching, and coaching football. In 1980 he became assistant coach for the Kelly Walsh wrestling team, eventually becoming the KW head coach, taking the team to second place at State, its highest ever placing at the time, in 1996. While teaching Auto Mechanics, Jerry took several auto trouble-shooting teams to state competitions. Two teams earned first place, taking them to the national competition in Washington, D.C.

Jerry loved hunting, fishing, playing the guitar, and spending time at the family cabin in the Big Horn mountains, especially when he could do it with his mom, his kids, and later his grandkids. He also loved restoring old cars, many that were finished, and some that were still in progress when he could no longer work on them. He taught himself to play the guitar at an early age, learning by ear, and he and friends formed a band in high school called Arnolt and the Raspberries. They played many “gigs,” especially for dances at the Industrial Building at the Fairgrounds. Playing his guitar was always solace for him when things were on his mind, and pleasure when the family was together. He loved all animals but especially dogs. He always had at least one, but usually two or three, that were part of the family, and they were always rescues.

Jerry went to a better place on December 19, 2022, at the age of 72, after a long battle with Lewy Body Dementia. He was surrounded by his loving family as he left this world behind, for a more peaceful place.

He was preceded in death by his grandparents, and his parents.

He is survived by his wife of 52 plus years, his daughter Jennifer (Asa Waterman) and granddaughter Madeleine Siebert of Casper; his son Craig, (Jennifer) and grandchildren Grable and Griffin of Longmont, Colorado; his sister Kathie Hove of Missoula, Montana; niece Heather (Andy) Wilcox and their children Braxton and Rylan of Missoula, Montana; niece Roberta (Scott) Pratt and their children Jessen and Preston of Durant, Oklahoma; nephew Matthew Hove, of Jacksonville, Oregon; several cousins, and many friends. In lieu of flowers, memorials to the Casper Humane Society or a charity of the donor’s choice in his name would be very much appreciated.

Jerry’s service will be livestreamed at the scheduled service time, 2 p.m. Saturday, Jan. 7, 2023. Click here to view the service.

Thomas E. Bushmaker, was born on Dec. 16, 1954, in Casper, Wyoming, the first child of Bill and Carroll (Cokenour) Bushmaker.

He went into the Air Force just three months after graduating from Kelly Walsh High School in 1973. He had to weigh in three times before he made weight to be accepted. The last time he got on the scale with his waffle stomper and briefcase. He earned rank of Master Sergeant and served 8 ½ years of foreign service which included time in Turkey, Greece, Thailand, Philippines, Germany, Saudi Arabia, England, United Kingdom, Abu Dhabi and Europe.

In the United States, he moved around from Mississippi, Florida, New York, Oklahoma and Ohio. He retired from the Air Force in 1994. After retirement he made his home in Dallas, Texas, working in different communication fields until retiring again in 1997.

He returned to Casper, Wyoming, in 2020. He was able to be with mom until her death and enjoyed getting reacquainted with sisters Bonnie and LaVonne along with their families here in Casper.

Tom was preceded in death by both mom and dad.

A Celebration of Virginia’s Life Service will be held in the Spring in her hometown of Lander, Wyoming.