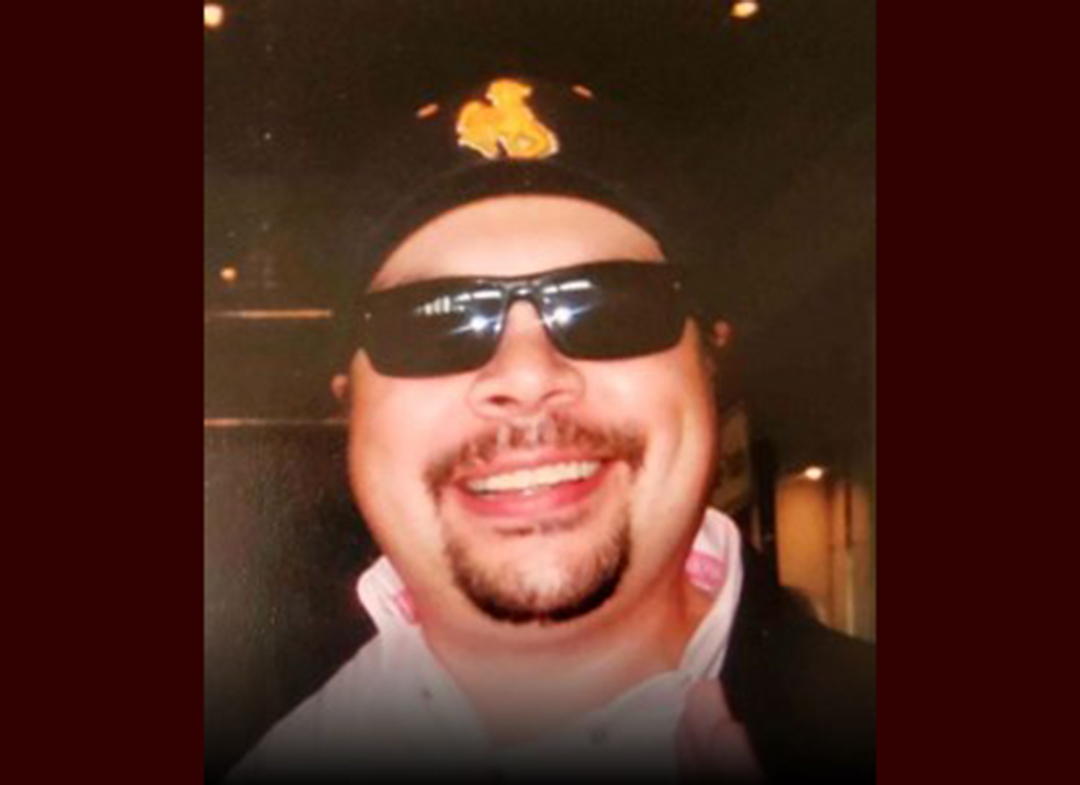 Richard (Rich) was born in Rawlins, WY on January 1, 1977, to Linda (Joella) Martinez and Armando Perez. Richard attended Rawlins High School. Rich worked for several years in the oil field as well as in several restaurants in Rawlins and Cheyenne.

Rich leaves behind a son from a previous relationship with Megan Sanchez, Augustine Ricardo Sanchez, and one grandson Theo Amore Sanchez.

Rich was known for his laughter, his willingness to help everyone, his friendly demeanor, and his generosity. He was very complimentary and always wanted to give everyone a hug. The love he had for his family and friends was amazing. He loved his son, grandson, mother, aunts, uncles, cousins, and friends and simply enjoyed spending time with them. His love and passion for music (all genres) were known by everyone.

Rich is preceded in death by his grandparents Mary and Alfred Abeyta of Rawlins, WY. Rich is survived by his son, Augustine (Danielle), his grandson Theo, his mother Linda Martinez (Antonio), and father Armando Perez, his brother Anthony Trujillo, and children Micaela and Eric Trujillo of Phoenix, AZ. As well as numerous aunts, uncles, and cousins.

Andre (“Andy”) H. Morgan, age 77, went to be with his Savior and Lord Jesus Christ January 10, 2023 at Shepherd of the Valley Care Center in Casper. Andre” (Andy) was born October 8, 1945 to Harry and Alberta Morgan in Hutchinson, Kansas. His birth name was Henry Lee Morgan, but it was legally changed in 1975 to Andre’ Henri Morgan. Andy and his twin brother, Harry Lee Morgan, graduated from Lawrence High School in Lawrence Kansas in 1963. In 1966 Andy earned an Associate’s Degree as Machinist from the Vocational School at Pittsburg State College in Pittsburg, Kansas.

Andy served in the Kansas Air National Guard from 1970 to 1976, stationed in Lawrence Kansas, doing reconnaissance work and working on the Red Eye Missile. In 1976 he moved to Casper and began working as a machinist for Westinghouse and other companies. He then worked 15 years at WOTCO and a few years at EXCAL before retiring in 2007. After retiring, Andy spent his time using his machinist skills and unique creativity in creating many ingenious metal models and sculptures.

Initially, after moving to Wyoming, Andy did a lot of hiking in the Big Horn and Wind River Mountains. In his own words he stated: “Awesome! I love Wyoming!” He wrote: “It was in the stunning beauty of the Central Rockies that I came to perceive God, Jesus, and the Beautiful Creator. My greatest reward and honor was my salvation in Jesus Christ, October 4, 1977.” Andy also wrote: “my greatest passion in life is intimacy with my Heavenly Father, with Jesus Christ, and the resident genius of Heaven and Earth, Holy Spirit. Ephesians 3:14-21 is pretty much my lifestyle.” As a spiritual vocation in life, Andy viewed himself as an intercessor prayer warrior. His close friend, Brian Gish would have a weekly prayer time in Andy’s house.

Due to health problems in the last couple of years, both of his lower legs had to be amputated and he became wheelchair bound. So, he chose his new home as Shepherd of the Valley Care and Rehabilitation Center. His goal was to work toward rehabilitation to walk again with artificial legs. He began to make good progress on that goal, but it was interrupted by more health issues. In spite of this, he encouraged some of the residents of the nursing home to do crafts, using their creativity along with creating many artful creations of his own. Andy and his roommate, Lloyd, became volunteer caretakers of the outdoor Rose Garden where they spent much of their afternoons in beautifying it and decorating it. He became the President of the Resident’s Council, directing the monthly meetings at Shepherd of the Valley. Andy also was invited to share sermons once a month at the Shepherd of the Valley Lutheran Church. His last sermon, from his wheel chair, was just two days before he passed away. After his most recent time in the hospital, Central Wyoming Hospice started to be involved in his nearing end of life. But he still rallied to the cause of being in church this last Sunday. Many of the residents and staff at the Shepherd of the Valley home became close friends with Andy and mentioned that his loss has caused a big hole in their hearts. But they rejoice in his graduation to his eternal home.

Andy never married. After moving to Casper, he became unofficially adopted into the family of Richard Culbertson’s. So, daughter, Melody Moore and her family, and the sons, Michael Culbertson and his family, Jonathan Culbertson and his family, and Kevin Culbertson all refer to Andy as “Uncle Andy”. Andy always had a tremendous positive influence on everyone he met and came in contact with.
Other family members surviving Andy include his twin brother Harry Morgan of Lawrence, Kansas and his daughter, (Andy’s niece) Lily Morgan.

Family members preceding Andy in death include his father and mother, Harry and Alberta Morgan, his brothers David Morgan and Lawrence Morgan, and nephew Phillip Morgan.

Andy’s request was for no funeral service, however a Celebration of Life will be held in his honor for family and friends on Monday, January 16th at 11 AM in the chapel at Restoration Church at 411 So. Walsh Drive in Casper. Any donations in his honor may go to the Wyoming Rescue Mission.

Linda Jeanette Monroe Minkes Goin was born in Casper, WY to Marion and Dorothy Monroe on January 14/15, 1948. She was the oldest of eight children. She was a cute redhead that excelled as a child and loved her siblings.

Linda married Joseph Minkes and had two children, Joseph Todd and Sunnie Kaye. In 1984, she lost her son Todd and in 1985, Joseph passed away. Life was rough, but she carried on for her daughter, Sunnie. In 1990, she married Richard Goin. He helped love and spoil their three grandkids, Brittany, Brady, and Brandy. Richard, fondly called “Papa Dick,” passed away in 2000, just six months before their 4th grandbaby, Brecken, was born.

Linda loved almost everything…she would help ANYONE…do anything for anyone. She was a hard worker, holding two or three jobs at a time if she had to. She loved the mountains, daisies, and God. She had what we called her “God Wall.” She loved the sunshine, fresh air, plants, her cat Lucy, Jaime from Outlander, the series Yellowstone, and listening to her grandson Brecken carry-on for hours about his video games even though she didn’t have a clue what any of it meant!
In her younger years, Linda loved a good drink or some beers, loved almost all music, and could make friends with anyone. Being home-bound in her later years didn’t keep Linda from making friends and shopping on her smart phone.

Linda’s sister Glenda Kay says “We will miss our big sister, as will those she impacted throughout her life from friends and family. Our hearts are all broken as we all mourn the loss of our beloved older sister. Linda’s bright light and big heart left us too soon, but we will remember her warmth, love and funny, witty personality.”

Linda’s granddaughter Brittany shared “They always say grandma’s hold the family together. Losing my grandma will always be unreal. I have memories from the age of 3 until now. I will continue to share them with all of her great-grandbabies for as long as I am able. The girls will miss their great grandma always. Grandma, I love you and I will miss you every day. I cherish the day I get to hug you tight again. Until then, love our babies and talk away with great grandma until I see you again.

She was good with God and was ready for her new adventure. She spoke about this with her sister-in-law/best friend as they shared this saying in her last couple of weeks: “Life is not a journey to the grave with the intention of arriving safely in a pretty and well-preserved body. But rather, to skid in broadside, thoroughly used up, totally worn out, and loudly proclaiming…WOW what a ride!”

Linda will be deeply missed by anyone and everyone that ever met her.

After graduation Shawn joined the United States Navy. He was stationed all over the world. As a Persian Gulf War veteran he was highly decorated with multiple awards and medals. After the Navy, Shawn worked a stint on the drilling rigs in WY and at a ski resort in Vail, CO. He then moved to Nevada where he was employed at several casinos in several different positions, but excelled as a card dealer taking someone’s money with a smile. It was also where Shawn met the love of his life, Vicki. They worked together then were married on May 4th, 1996. Their mutual love of horses and dogs allowed them an outlet outside of work. Shawn began to bird hunt chukars with his much loved bird dogs. He would always say “I love Vicki more than anything, but bird hunting is a really close second”.

He left the casino life and worked as a truck driver, building consultant, and several other jobs when he decided it was time to move on. Shawn and Vicki packed their belongings and moved to Douglas, WY. He decided to become an electrician. At the age of 41 he began as a first year apprentice electrician and ended his career at 54 years old as a jobsite superintendent. Shawn literally worked from the bottom to the top in what is known as a “young man’s job”. He was 20 years behind everyone else, but he kept working at it and made it to the top. Shawn made many lifelong friends, fishing partners, hunting partners, and companions while working as an electrician. He was held in high regard by his employers, customers, and co-workers at Process Power and Control then later Loenbro.

Shawn had two successful hip replacements in 2022. While completing his Physical Therapy one day in November he became weak and unable to complete his PT session. It was at this time he became extremely sick, extremely fast. On December 30th when the pain became unbearable, he was taken to the Emergency Room in Casper, WY. He was transported to the Douglas Care Center on January 5th where he was able to rest comfortably and see his dogs. Visitors came from all over the country to see him and comfort him. Shawn passed away at 6:30 a.m. on the morning of the 8th of January with his wife, mother, brother, and cousin by his side. A beloved family member and friend, Shawn will be greatly missed.

An inurnment service is being planned for June 2023 at the Alva Cemetery. A memorial has not been established at this time.