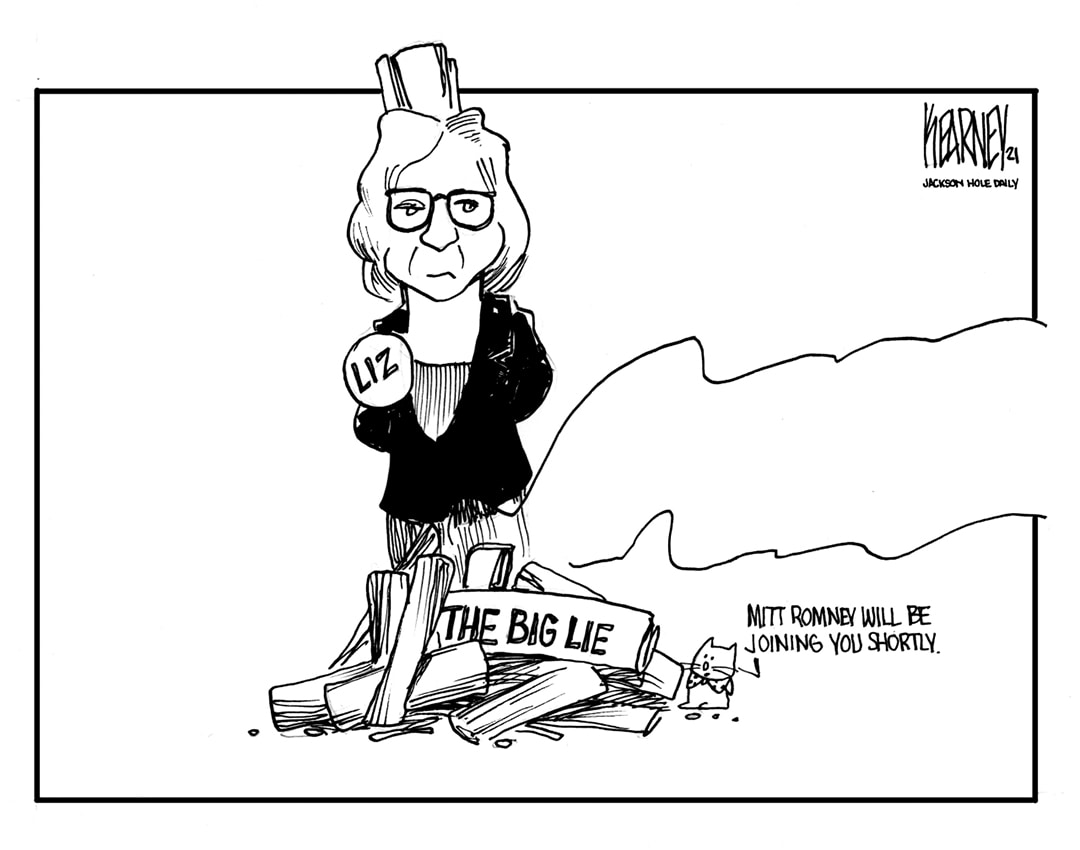 In his epic song “Youngstown,” Bruce Springsteen places an old steel worker in the rubble of closed-down steel mills and factories. Looking around at the scraps of what became known as America’s Rust Belt, the man says:

“We sent our sons to Korea and Vietnam, now we’re wondering what they were dying for.”

With poetic precision, this line captures a looming, epic struggle for political power in America today: The fight for control over the Republican party.

The two standard bearers, former President Donald Trump and U.S. Rep. Liz Cheney, are bound to face off in the 2022 primary here in Wyoming. Trump will endorse an anti-Cheney candidate. Cheney, almost certain by then to be free from conference-chair duties in Congress, will need a win to launch her increasingly expectable 2024 presidential campaign.

Although Cheney very often voted for Trump’s policies, there are some key differences that separate the two, enough so to place them on different ideological sides within the party. They are, of course, separated by the controversy over the vote-fraud claims from last year’s election, but that is one issue. The deeper difference is centered around the concept of patriotism.

When Trump came into office in 2016, America was 15 years into the war on terror. He saw the war weariness and wanted Americans back to work and our military home.

To him, patriotism is built on prosperity.

Cheney seems to believe that prosperity and patriotism have nothing to do with each other. A leader of the neoconservative faction of the GOP, she confines patriotism to the duty of the American people to support armed conflict.

To be clear, neither Cheney nor anyone else in American politics believes that we should fight wars because we want to. Everyone agrees that we only go to war because we have to. But that does not change the fact that our ability to endure long wars is ultimately tied to our nation’s economic performance.

Trump established his brand of prosperity-based patriotism as the prevailing doctrine of the Republican party. If Cheney takes over leadership, she will bring back the war-based version of patriotism that reigned before Trump.

Before Cheney takes on a Trump-endorsed candidate and re-affirms neoconservatism as Republican philosophy, she might want to take a tour through recent history.

The Vietnam War protests, which began in the 1960s, morphed into an overall war weariness toward the end of the 1970s. Coinciding with the economic hardship from the era of Rust Belt decline, this conflict fatigue shaped Americans’ view of the Cold War. As Springsteen’s lyric alludes, the war brand of patriotism ran short on friends in the economic wasteland of the 1970s.

That was the first time in modern American history when war weariness set the political agenda for the country. It would not be the last.

We recovered from the Rust-Belt downturn, thanks in good part to Presidents Ronald Reagan and Bill Clinton, but economic stagnation returned in the 2000s. The American working class once again found itself wading through syrup to get ahead economically.

Following a rebound in Barack Obama’s second term and under Trump, our economy is once again on the brink of strife and struggle. It is in this economy that Cheney wants to return the Republican party to war-based patriotism.

Her primary victory next year is nowhere near certain. Trump, whose abrasive character is off-putting to many, is also genuinely popular with many others. His popularity is founded in good part in his professed appreciation for a strong, independent working class. With his “America First” message Trump tries to make the case that patriotism is forged in families with opportunities to build a better life on hard work and self determination: that patriotism is built on prosperity.

Compared to Trump, Cheney’s messaging puts much less emphasis on the economic well-being of the American worker. Her war-based brand of patriotism ignores the fact that a nation’s war tolerance wears thin when people struggle to pay for the funeral dinners as they lay their fallen sons and daughters to rest.

Can she win next year? Only time will tell. But Cheney has a formidable challenge ahead of her. Trump’s emphasis on the economy at home over conflict abroad resonated with millions of blue-collar Americans. They flocked to his rallies. They flocked to his ballot, and more so in Wyoming than in any other state.

Cheney does not seem to understand the Trump voter. She has dismissed the idea of focusing on a working-class Republican electorate as “neo-Marxist”.

She seems to believe that she can win by continuously pounding the former president. She takes every opportunity to reassert that Trump’s claims of a fraudulent election are lies, and to pin the Jan. 6 mob-storm of the U.S. Capitol on him. Neither have made much of a dent in Trump’s popularity here in Wyoming. According to the Club for Growth, he is viewed favorably by four out of five GOP primary voters. Cheney, by contrast, is deep underwater in the same poll.

Maybe Trump loyalists believe claims that Cheney was silent on far-left riots in 2020. Perhaps they wanted her to join her colleagues in accusing Maxine Waters of inciting violence during the Derek Chauvin trial in Minneapolis. Or maybe they just don’t care that much anymore about election accusations and Jan. 6. Maybe their minds are preoccupied with finding jobs that feed their kids or keeping their small businesses open.

Cheney is playing a high-stakes game with her political career. By decoupling patriotism from prosperity she will only face tougher challenges going forward. Many economists and analysts agree that high inflation is coming. There is also widespread worry that our galloping budget deficit can lead to panic-driven tax hikes and harsh cuts in benefits and entitlements.

Will Cheney be that neocon? Or will she embrace the MAGA-hat wearing working-class conservative and recognize that patriotism is built on prosperity?