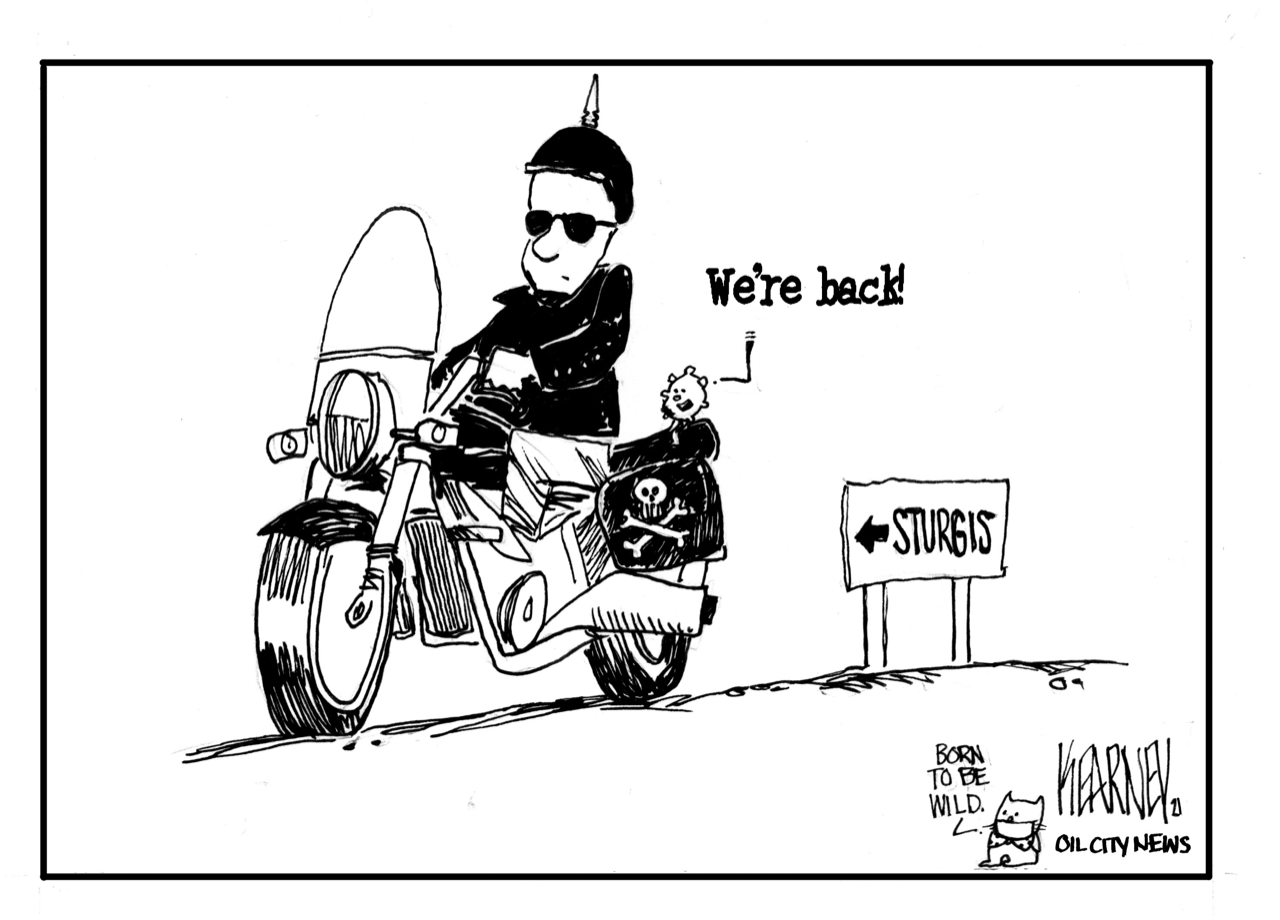 Sturgis is back as the COVID-19 Delta variant spreads. Cartoon by Greg Kearney.

Political polarization is literally killing us

In a normal year, you wouldn’t be able to keep me from tonight’s Joe Bonamassa concert at the Cheyenne Civic Center. How often does one of the leading blues-rock guitarists in the world play the capital city?

Of course, it’s hardly a normal year. COVID-19 is on the rise again in Wyoming and the U.S. thanks to the Delta variant. And even though I’m vaccinated, crowding into an indoor venue with a lot of maskless, unvaccinated music fans seems foolhardy.

I jumped at the first chance I had to get the vaccine in Cheyenne in February. I expected most people would too, given that more than 400,000 Americans had already died of COVID-19.

Instead, vaccines became politicized, badges of red vs. blue brand loyalty. As a result, the Equality State ranks 48th in the nation with only 36% of the population fully vaccinated as of Aug. 5, and untold numbers of our neighbors have been unnecessarily sickened — political casualties in an otherwise winnable war.

Initially, I felt highly protected by the vaccine. Now, thanks to the Delta variant and my community’s willingness to serve as a reservoir for it, I’m back to wearing my mask.

The Delta variant, now the dominant strain in Wyoming, has changed everything. The fully vaccinated can still get coronavirus and also transmit the disease, according to the Centers for Disease Control and Prevention. Vaccination is, however, still highly protective against serious illness or hospitalization.

“We are deeply concerned. The Delta variant has really changed the COVID fight we have on our hands,” Dr. Alexia Harrist, Wyoming state health officer and epidemiologist, said in a press release last week. “Unfortunately, Wyoming’s low vaccination rate makes our state more vulnerable to this highly contagious variant.”

The Wyoming Department of Health strongly advises residents to be vaccinated. It noted that between May 1 and July 28, about 95% of the more than 5,000 people with a lab-confirmed or probable case of COVID-19 were not fully vaccinated.

Given all the evidence supporting vaccination, I wondered if some of my vaccine-resistant family members or friends may have changed their minds. I had one taker of my request to talk about the issue on the record.

Barb Cummins of Cheyenne has been a friend for more than 30 years. When the vaccine became available she was reluctant to get the shot, and I have been worried about her health ever since. Fortunately Cummins has not gotten ill, and she credits always wearing a mask and not venturing much into public indoor areas.

She remains firm in her decision to not be vaccinated. “I don’t feel it was properly tested, because they were in such a rush,” Cummins said. “I know it’s not protecting as well as it should or people think, because I know people who have been vaccinated who either immediately or shortly after got sick.”

Cummins believes the federal and state governments are pushing the vaccines too hard. “They’re really taking advantage of the situation, and they’re using it to further their cause,” she said. “They want to see how many people they can get to go along and be sheep.”

She sees government mandates to get the vaccine likely in the future. But Cummins thinks there would be widespread opposition to such a mandate in Wyoming. I agree.

A quick scan of the Facebook fury that follows any WyoFile pandemic coverage gives a clear sense of the venom, misinformation and scapegoating that’s dominating the online discussion.

Posters recently called Dr. Alexia Harrist, Wyoming’s public health officer, a liar and accused her and Gov. Mark Gordon of being criminals for recommending vaccines and masks, for example. Not exactly helpful or high-minded civic discourse.

What really riles me, though, is when anyone tries to pin the blame for COVID transmissions on the poor or immigrants. It’s a decidedly false, cheap shot taken by way too many politicians on the extreme right, usually with a feigned look of disdain.

And as Arthur Caplan of New York University’s Grossman School of Medicine told PolitiFact, “The notion of immigrants bringing disease has been alleged about Gypsies, Jews, Italians, Irish and Blacks. As we know from Ebola, SARS and influenza, infections get here all the time. The issue is what do we do to stop their spread.”

That should definitely be the focus in Wyoming. I’m particularly worried about the tens of thousands of people who recently attended Cheyenne Frontier Days. I decided to stay away this year.

I hope it wasn’t a super-spreader event, but I don’t think we’ll know for a while. Prior to the rodeo and other related events, Cheyenne Regional Medical Center’s COVID ward was full.

Though he lives in Casper, Natrona County Health Officer Mark Dowell told  Cap City News before Frontier Days that he was concerned about its impact even though it’s largely held outdoors.

“But there’s a lot of indoor stuff, and there are so many people close to each other and not masking,” he said. “There may be a significant uptick in cases across the region, or there may not be. We just don’t know.”

I cringe whenever I see TV coverage of the Sturgis Motorcycle Rally in South Dakota, which is expected to draw 700,000 people over its 10 days. Spotting a mask or face covering in a crowd is the 2021 equivalent of playing “Where’s Waldo?”

San Diego State University researchers estimated more than 260,000 COVID cases throughout the country could be linked to last year’s bike rally. With its proximity to Wyoming, many motorcyclists obviously rode through the state and will again this year.

Sturgis spokesperson Christina Steele told the Washington Post that “people here don’t want to talk about COVID. They want to have a good time.”

So do I. But while I know events like the Bonamassa concert would be fun, it’s not worth the risk of getting sick and possibly spreading the disease to others, especially friends, family and co-workers.

I think Dowell’s advice is spot on: “This virus could be in the rearview mirror if the country would vaccinate. We could put this all behind us and move on.”

This opinion piece was written by Kerry Drake and originally published by WyoFile and is republished here with permission.