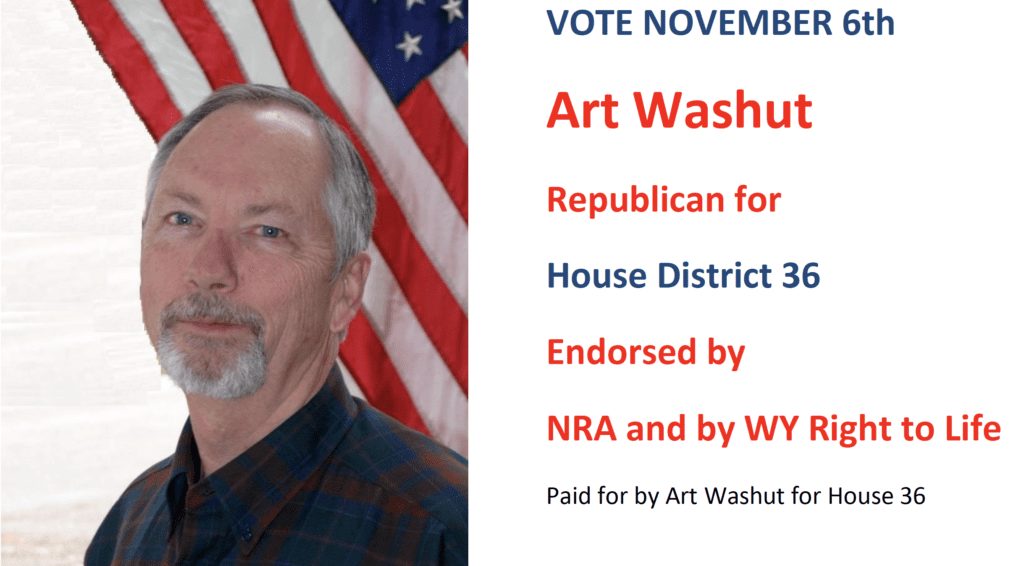 Good day to you all!

I would like to begin by telling you a little about who I am and how my life has hopefully prepared me to engage in the debates within the Wyoming House of Representatives and to serve the people of House District 36.

I am a Casper native I was born to hardworking and self-sacrificing parents who instilled in me solid Wyoming values. I graduated from Casper College and Chadron State College where I studied criminal justice. I joined the Casper Police Department in the middle of an oil boom in 1980. By 1986 the boom had gone bust. I remember when a group of us were deployed to protect the old American Bank at 1st and David. The bank had failed and there was a worry that depositors might storm the building. I was standing at the door having this sensation that I was living through a scene out of the great depression. In the next few years the police department cut nearly one third of the officers by not replacing those who quit or retired. Many of my friends left the department. Those were lean years difficult years and I learned what our boom and bust economy feels like and the impact a down economy has on people in both the private sector and in government. When we were at our lowest point those of us who remained were run ragged. Too many calls, too few officers. Even so we made it through.

Despite that unsettling period, I rose through the ranks and did most everything I had ever desired to do in policing. While at CPD, Chief Fred Rainguet encouraged me to go to graduate school in order to be better prepared for promotions in the future. So in my spare time I finished a Master’s in Public Administration from the University of Wyoming.
When the City of Casper formed a Public Safety Department with Fire and Police merged at the administrative level, I spent several years as the Deputy Police Chief where I was responsible for police operations including patrol, traffic, detectives, narcotics and all the rest. I managed my budget and supervised most of the police employees. When the Casper Public Safety Director resigned in 1999, the decision was made to return to the traditional police department fire department configuration and I became the interim police chief. The same day I was appointed to that position, Casper College offered me a faculty position. While the pay was much less, the teaching position would allow me much more time with my wife, Megan, and our children. At the beginning of the next semester I retired from the police force. While I would miss police work, at least much of it, I would not miss the unpredictable hours and 3 am phone calls that were never good news. I started my second career at Casper College where I have been chairman of the Criminal Justice Department and teaching classes in criminal justice, political science and addictionology. I really enjoy teaching both at the college and at the Wyoming Law Enforcement Academy where I am an adjunct instructor. As a college instructor I have received several honors most notably the NISOD Award, the Judith Bailey Sculley Award and just last spring, the top honor for faculty, the Rosenthal Award.

So I have this great job that I love, why in the world am I running for the legislature? As many of you know HD36 is presently occupied by the only elected Democrat in Natrona County. Despite much effort by the Natrona County Republican Party, no one would step up. Unseating an incumbent is a difficult task and a challenging way to launch one’s political career. By May, when it was abundantly clear that no one would take on the challenge, I agreed to run for the legislature. This is Casper and Evansville and not Havana, so there should be two names on the ballot!

Then just as I was preparing to announce my candidacy, my former student and friend, Jacob Carlson, was shot and critically injured. I immediately led an effort to get retired police officers to help Jacob and his family. One of the fellas suggested we start a non-profit to raise funds for future cases when a first responder might be killed or seriously injured. He asked me to spearhead the effort. So through the summer while campaigning, I was also organizing what is now known as the Heroes’ Fund a Committee of the Wyoming Medical Center Foundation. We worked very hard and hosted our first fundraiser on August 10th I was thrilled when the Gordon for Governor and the Foster Friess Campaigns jumped in as a sponsor for our Golf Tournament. Foster and Jenny Gordon came down to visit with our team and many of the golfers. It was a great day! The golf tournament was a big success, we had raised over $23,000 in just 70 days because we live in a great community and we had a great cause. Thank you Casper!
I have been telling the people in House District 36 that I am a conservative Christian a family man with traditional Wyoming values. I am a community guy, I have been involved in a variety of local activities through the years and presently served on the board at Casper Midget Football and St. Anthony Manor and as I mentioned I am a proud member of the Heroes’ Fund of the Wyoming Medical center Foundation. I am endorsed by the NRA and by Wyoming Right to Life. I am opposed to changing our marijuana laws and I think we need to freeze the property taxes of our senior citizens so that they do not increase every time our economy booms. I believe that criminal justice reform can be accomplished without jeopardizing public safety. Most of all I believe we need to protect those things that make Wyoming special. I love Wyoming! After all, one of the greatest joys in life is watching a kid catch a fish! Our wildlife, our wide open spaces and our low taxes make this an amazing place to live. In the coming years, Wyoming will be under tremendous pressure to change. There are many calls already for a diversified economy and new industries to provide jobs for our children. All well and good, but how will such changes and additions transform our state? Wyoming with one million people will not be the same place that it is today. Change may be inevitable but I believe we can benefit from having representatives in Cheyenne who cherish Wyoming’s beauty and its culture. Can we preserve our beauty and culture as we grow and as we extract mineral resources? I believe we can, but it will require a purposeful effort and a firm commitment.

These are some of my reasons for running! I do have both a web page and a Facebook page where you can learn more about my campaign and my position on the issues, just search for Art Washut for House 36 and you will find them.

Recently we have been given another reason to have folks like me serving in our legislature. The confirmation of Justice Kavanaugh provides me with great hope. Many of the mandates that have been forced on us in a one size fits all straightjacket by the U.S. Supreme Court might in time be lifted or relaxed. When those days arrive, it will be important that our legislature in Cheyenne be full of Republicans who are willing to grab that brass ring when it comes and pass legislation that reflects our Wyoming character and our western values.

I learned in policing that I could never make everybody happy and I learned to have thick skin when I was cross examined or falsely accused. I often had to make hard decisions and then live with the consequences. My wife and I became adept at stretching a policeman’s salary to provide for a growing family. I experienced firsthand that what goes up will come down in this state and that the lean years can persist and you can never predict for sure when it will quit raining. I learned that government agencies like to grow and that they want to provide the best of services with all of the latest and greatest technology of their profession. I witnessed that reductions in those agency budgets are resisted and genuinely painful and those reductions always impact the lives of real people both inside the agency and in the communities which are served by those agencies. I learned that far too often, when seconds count, the police are only minutes away and that citizens must have the ability and the will to defend themselves when violence erupts. I have not forgotten those lessons.

In the primary election I garnered over 1,000 votes! That was the most encouraging news I received during the campaign. Now comes the general election! Many races will be won or lost based on who shows up to vote. If my views resonate with you, please come out and VOTE on Tuesday November 6th. Together we win! VOTE ART WASHUT FOR HOUSE DISTRICT 36.

PAID FOR BY ART WASHUT FOR HOUSE 36

This article is a promoted post. The views, thoughts, and opinions expressed in the text belong solely to the organization that paid for the article, and do not necessarily reflect the views, thoughts or opinions of Oil City News, its employees or its publisher.