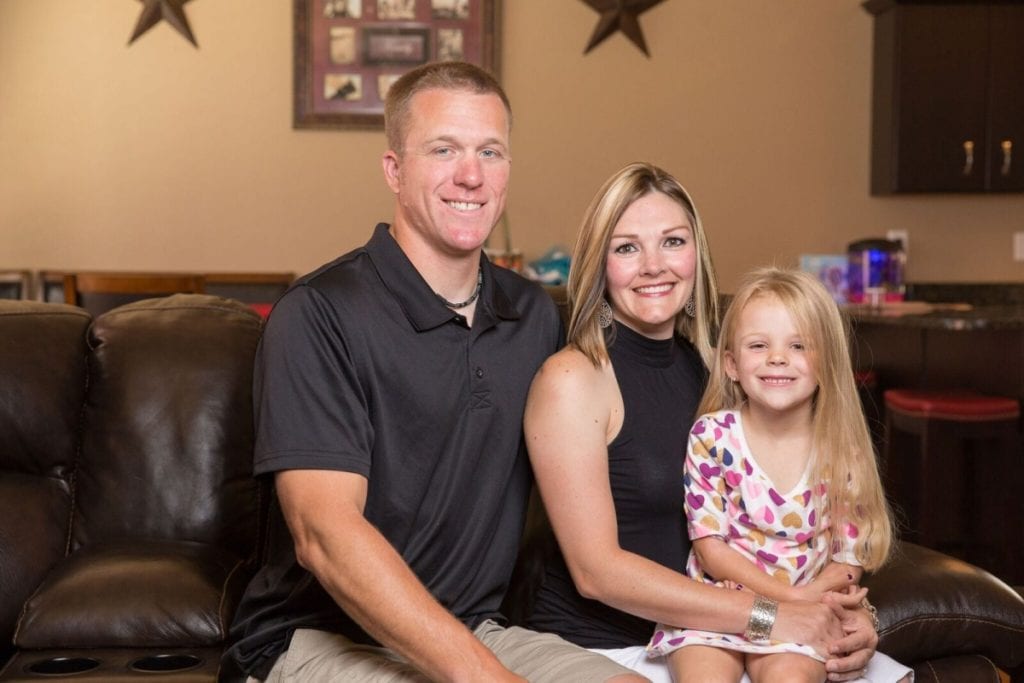 It took four years to diagnose Heather Grigg's pelvic venous insufficiency. After treatment at Wyoming Medical Center, she is back to doing the activities she loves.

In her first visit to her obstetrician after the birth of her daughter, she described her symptoms: frequent urination, uterine contractions, and stress incontinence of the bladder. The doctor told Heather she had no cysts on her ovaries, no pelvic lumps and no observable issues that could be causing her symptoms. Sometimes they came from normal changes in the body after pregnancy. The doctor suggested Heather take some anti-anxiety medication.

She got similar advice the next year when she went back for her yearly exam, and she went to see her primary care physician. Her pelvic symptoms continued to worsen over the next three years, and new symptoms developed: night sweats and hot flashes, irregular menstrual cycles, discoloration of the skin on her face, pressure and bloating in the abdomen and increased pain that only relieved when lying down. Pelvic exams, general exams and multiple panels of blood work continued to show that everything was normal. She tried multiple hormone therapies in case it was a hormonal imbalance.

By the fourth year, the pain in her pelvis had become intense at times, and she felt “heavy” when she walked or moved her legs. Daily activities became difficult, and Heather gave up some of her active hobbies as well as her exercise regimen.

“It felt like I had a 10-pound tennis ball inside my pelvis. I knew it was not normal,” said Heather.

This spring, Heather insisted on more testing. She underwent a pelvic ultrasound that showed pelvic venous insufficiency (PVI), a condition in which the broken valves in the ovarian (gonadal) veins prevent blood from exiting the pelvis, causing blood to pool in the blocked veins. It causes pain, sometimes severe, can get worse with strenuous activity and can limit activities a woman may want to do.

It is most commonly found in women of childbearing age, and pregnancy is believed to be a contributing factor, said Charles Bowkley III, M.D., a neurointerventional radiologist at Wyoming Medical Center and Outpatient Radiology.

“It is very common for women with PVI to go undiagnosed for a lengthy period of time. By the time most of my patients come to see me for treatment, they have seen their primary doctor, their OB/GYN, a urologist and oftentimes a gastroenterologist,” Dr. Bowkley said. “It’s easy to overlook the venous system as a cause of pain because there are so many other organ systems in the pelvis.”

The symptoms of PVI – including pelvic pain and feeling “heavy”—are similar to symptoms of several medical conditions and can be hard to recognize. Heather and her doctor eventually decided to do a pelvic ultrasound which showed PVI.

As an occupational therapist with the school district, Heather is accustomed to reading medical research and understanding what it means. She found articles in reputable medical journals about the latest treatments, including ovarian vein embolization.

“I remembered reading about Dr. Bowkley when he came to town. He had really high credentials and was doing cutting-edge stuff right here in Casper,” she said.

Her doctor referred Heather to Outpatient Radiology, and she underwent vein embolization the day after Memorial Day.

For PVI patients, Dr. Bowkley uses an MRI technique called TWIST, which produces a series of images in real-time. TWIST actively maps the passage of contrast in the blood through the pelvic vessels, as opposed to a traditional MRI scan which produces images at a single point in time. Think of it as a roadmap to a patient’s unique physiology.

Heather’s TWIST showed that her left ovarian vein (which carries blood toward the heart) had a unique connection with the left kidney vein.

“Dr. Bowkley showed me the image, and it looked like a big old fish hook stuck in my pelvis. It was a huge, distended vein,” Heather said.

This treatment for PVI is an outpatient procedure, meaning most patients will not require an overnight stay in the hospital. Heather checked into the hospital early in the morning, and lay still on the table for about 2 ½ hours.

Dr. Bowkley made a small incision in Heather’s groin and, using X-ray guidance, snaked a small sterile catheter through her central and left kidney veins and into the incompetent ovary vein. Through the catheter, he deployed a small coil (like the spring in a ballpoint pen) and blocked, or dammed, the blood flowing in the wrong direction.

“Once there is an adequate dam in place, the blood finds other natural paths to flow to the central venous system,” Bowkley said. “This process stops the blood from flowing through the broken veins, thus alleviating the venous pooling in the pelvis thereby decreasing pain and discomfort.”

Heather lay flat for two hours under nursing supervision on our outpatient floor, ate lunch and then went home. She experience minor cramping immediately after the procedure, which is expected, but was able to manage the pain with the help of Dr. Bowkley’s team.

Patients who undergo PVI treatment are back to being more active almost immediately, Dr. Bowkley said. Today, Heather can do whatever she wants to do. The family loves playing in the great outdoors, and they’ve spent the summer kayaking, hiking and exploring Wyoming’s mountains in their off-road Jeep.

“The really cool part was that I did not have any pain,” Heather said. “When you have had pain for a long time, your body just kind of accommodates to it. You do not recognize it after a while. Today, I feel great. It was like magic.”

Heather’s results are pretty typical for women who get the treatment. The remarkable thing about her case, Dr. Bowkley said, is how she did not give up, even after more than four years without a diagnosis. Then, she fought to get the procedure covered by her insurance, even though PVI isn’t a commonly reimbursable condition.

“Heather’s dedication to her own health and her desire to develop a clear understanding of her disease process were critical to her success. Not only was Heather in tune with her body, she read the available literature and knew her options. She wasn’t looking forward to a hysterectomy and wanted a less invasive alternative,” Bowkley said.

Pelvic venous insufficiency (PVI) is a condition resulting from broken valves on the inside of the gonadal (ovarian) veins. The disease process was previously referred to as Pelvic Congestion Syndrome, however the term pelvic venous insufficiency identifies the root cause and is the newer terminology. Instead of gonadal venous blood flowing up and out of the pelvis, the blood follows gravity flowing in the wrong direction – causing the pelvic veins to dilate.

What are the symptoms?

As the veins dilate in response to venous blood flowing in the wrong direction the condition becomes painful. Women state that they feel a dull ache or heaviness, which worsens throughout the day, after strenuous activity, and commonly following intercourse. These symptoms tend to improve with lying down, elevating the pelvis on pillows, and is typically resolved following a night of sleep. Some women resort to oral pain medicine, visit https://buysomapillsonline.com to help control their symptoms.

Who is most at risk?

Women of childbearing age are most commonly affected. The gonadal veins dilate markedly in response to pregnancy and this is believed to be a contributing factor. Regardless of the underlying pressure on the pelvic venous system, ultimately the gonadal venous valves fail; valve failure is the cause of the aches and pains women like Heather experience.

What do women need to know about PVI?

First, you can take comfort in knowing that a local physician right here in Wyoming understands what you have been through; one who knows how to diagnose and treat venous disease. Second, this is a treatable disease process; the pain is not “all in your head.” Any one of us would experience a strong emotional challenge if we were dealing with pain on a daily basis. Finally, make sure you read and understand your insurance policy coverage for gonadal venous embolization and be prepared to have a very thorough discussion with them regarding your care.

Dr. Bowkley is the only neurointerventional radiologist in Wyoming, and is Wyoming Medical Center’s 2017 Physician of the Year. He is board certified in diagnostic and vascular / interventional radiology. He joined the team at Casper Medical Imaging and Outpatient Radiology in 2010 and also practices at Wyoming Medical Center. Call (307) 265-1620 for an appointment or referral.